if you catch me running off with my mouth...

I was talking with Lane—she’s on the CSULA speech team—tonight, and I mentioned that tonight was my last night of Planes, Trains & Automobiles and I had nothing planned to write about. Her response: that I should write about how John Candy—and I hope I get the phrasing right—was fucking amazing. The problem, as I explained to her, is that she just covered that topic in one sentence.

It seems wrong to write an entire entry about John Candy, but none about Steve Martin. Candy, and Candy’s characters, are a little nicer, though. In his New York Times obituary, 5 March 1994, Glenn Collins writes: “Mr. Candy was frequently cast as a sympathetic, stumbling, ordinary guy, and often played the slob.” His characters Freddie in Splash (on one of my family’s videotapes when I was a kid, along with Footloose and Romancing the Stone) has one of my favorite lines in that movie (which might not make any sense out of context):

Telephone. He was on the phone in ‘Nam when the grenade went off and ever since then, he runs and gets in a car and drives away.

While it is Neal that undergoes notable change in this film, Del is clearly the heart of this film. And, that is, for the most part, because of John Candy. Candy (Del) can call a guy (the taxi stand guy at the airport) an “insensitive asshole” and make it sound polite. His characters demonstrated genuine concern for others and usually seemed fairly happy with their lives, regardless of the details of how those lives might be going.

After tonight, I am done with Planes, Trains & Automobiles (for now).

I won’t get to write about why the “taxiola” driver is credited as Doobie while his car says his name is Doobby. I won’t get to write about Neal’s wife’s suspicions that he has been cheating on her. I won’t get to examine in great philosophical detail the conversation about noogies and Indian burns. I won’t get to wonder through some rambly blog entry about how Del has made friends with his customers since, a) his shower rings are good quality and he’s a good salesman so they buy them and don’t see him again for a long time, or b) his shower rings are not good quality and need to be replaced regularly, which doesn’t seem like something Del would sell. I won’t spend what would probably be a three parter dealing with the homophobia and challenged masculinity in this film.

But, before I go, I want to reiterate some of what Del Griffith has to tell us. Notably, there’s this:

You wanna hurt me? Go right ahead if it makes you feel any better. I’m an easy target. Yeah, you’re right, I talk too much. I also listen too much. I could be a cold-hearted cynic like you… but I don’t like to hurt people’s feelings. Well, you think what you want about me; I’m not changing. I like… I like me. My wife likes me. My customers like me. ‘Cause I’m the real article. What you see is what you get.

Speech team was at a tournament today, another one tomorrow, and it occurs to me that while I also don’t like to hurt people’s feelings, I tend to be critical, negative before I am positive. On my ballots when I am judging speeches, if your speech is good, I probably just won’t write much, if anything. If I take the time to look down at my ballot to write something long while you’re speaking, I probably am not liking something you’re doing, either for purely subjective reasons, or, better yet, because of some objective standard you have violated. I’m not mean about it, but some of my ballots probably do make competitors feel bad. I can imagine Del Griffith in the same position, writing a lot of positive feedback on his ballot. Del’s a good guy. We could all learn something from him. 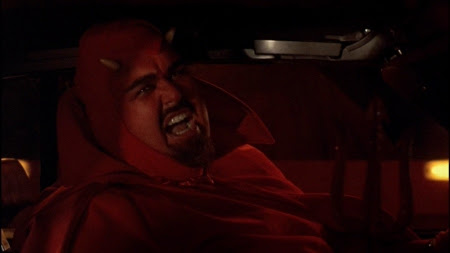