For the record, in case anyone reading this really knows their versions of The Wicker Man, I am pretty sure I'm watching the "Middle Version" ...

Except, weirdly, I do not recall any scenes before we see Howie's plane when I watched the movie last night. I'm reading about the "Long Version" earlier and I read about a sequence with Howie and his deputy--that is not in this version. Then I read about the sequence in the church, Howie and his fiancee singing in church, Howie reading from the Bible and receiving Holy Communion. Apparently, this church bit flew right past me last night... or was magically added after the sacrifice last night.

What is missing from this version (aside from that bit with his deputy) is a scene with a postman and that same deputy discussing Howie and his fiancee. The postman suggests that Howie has "a bit of skirt" at Summerisle, from which he has received the letter that sets the film's story going. McTaggart (the deputy) responds, "What him? The only woman he's interested in is the Virgin Mary."

The postman asks, "Oh? I thought he was going steady with Mary Bannock?" A good name, the biblical Mary, with Bannock, a type of bread, and in a film in which we later see a human-size representation of John Barleycorn made of bread. John Barleycorn, of course, serves as a symbol not only for the harvesting of barley but also the drinks made therefrom--beer and whiskey--and the effects they cause. The character of John Barleycorn, which has been linked to the pagan Beowa. Sir James Frazier, in The Golden Bough, cites John Barleycorn as proof of a pagan cult in English history, a cult not unlike the one on Summerisle, worshipping, as they do, Nuada, the god of the sun, and Avellanau, a goddess of orchards. (I wanted to reference Merlin's poem "Avellanau" but cannot seem to readily find a good version of it online, so I shall move on.) John Barleycorn is essentially a Christ-Figure and he is "plowed" and "sown" and "harrowed" and has "clods [thrown] upon his head" until he is dead. Rain falls and John Barleycorn comes back to life. Howie, of course, does not come back to life after his sacrifice, but his sacrifice, the islanders believe, will bring life to their coming harvest. (Notably, Howie does go into the earth with Rowan and reemerges. Not for three days and nights, bu...) John Barleycorn is the human embodiment of barley, to be planted and harvested.

Sidenote: nearly every named character in The Wicker Man is named after a plant of some sort. Myrtle. Rowan. Ash. Willow. Rose. Daisy. Alder. Oak. Lennox. Beech. Holly. When Howie finds reference to the deaths of Rachel and Benjamin Morrison, "names from the Bible," the records woman points out that they were "very old." If I had to guess, Lord Summerisle probably has a biblical name as well, as he, too, is quite old.

But, back to the missing scene. The postman has just said, "I thought he was going steady with Mary Bannock?"

McTaggart replies, "Steady's the word. In two years he hasn't so much as tickled her fancy." Then, as if the meaning is not already clear, he adds, "He's keeping himself pure for the wedding day!"

The postman responds, "Ah poor old Mary! I don't know what she sees in him." The more crazy the Summerisle folk get later, the more we identify with Howie, of course. But, here, before the plot has even gotten underway, we're offered up a very negative view of him. "Hey, when those two are married," the postman continues, "she'll spend more time on her knees in church than on her back in bed."

Sergeant Howie is a virgin. Were he a younger man, one might suspect the film as a metaphor for his coming of age. Instead, his virginity is just one more marker of his devout Christianity. (Perhaps, it is part of the seduction itself that Willow's shadow resembles a nun as she begins her dance.) Since names have already come up, I must point out that Howie is a Scottish surname related to a hollow. But, is he hollow? The film never suggests that his Christianity is wrong, nor is it suggested that the pagan beliefs and rituals of Summerisle are wrong either. It is implied by Lord Summerisle's telling of his grandfather's scientific experiments with the agriculture of the island that the failed crop has nothing whatsoever to do with any magic, anything that might be appeased by a human sacrifice. But, the thing about apotropaic ritual is that it really doesn't matter if it explicitly works, but that, accompanied with a positive outcome, and a feeling of success, the reality loses importance.

I wonder, by the way, had Howie given in to Willow's song and gone to her, would he have taken himself out of the running as sacrifice by no longer being a virgin or would that have been just one more bit of him being "king for a day"? (but, more on that tomorrow) 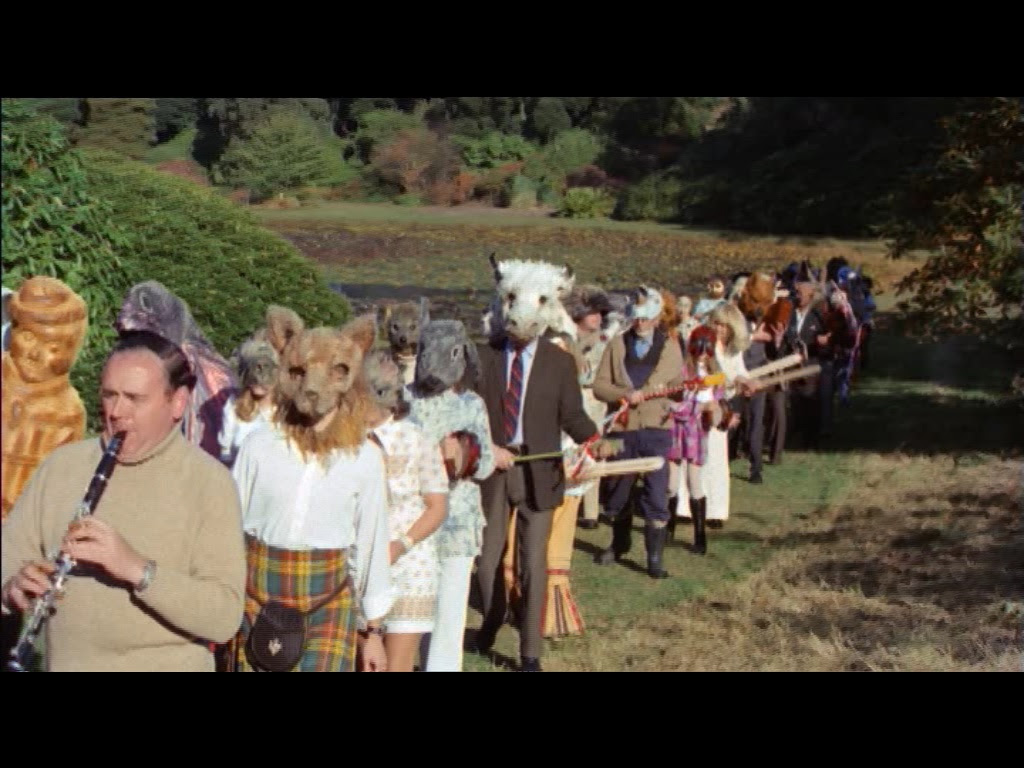 Transmutation, or the representation thereof, is what matters on this May Day on Summerisle. Everyone wheres a mask and/or a costume. Rowan, supposedly, has already turned into a hare. And, of course, Holly, the girl dressed as a hare, is the one who is (figuratively) beheaded. Finally, to be sacrificed, Howie is put inside the body of the Wicker Man. He and the Wicker Man are essentially one and the same (though with the addition of the other animals within the body of the Wicker Man, of course). They die together, and the final image of the Wicker Man's head falling to reveal the setting sun behind it--this is the beheading they have only done figuratively previously...

In fact, it's hard to gauge just how much of the ritual is fully believed by the Summerisle folk and how much is there to pull Howie in and get him where he needs to be for the final ritual. I find it notable that when the Summerisle folk sing as the Wicker Man burns, they no longer wear their masks. Does Willow know the hand of glory will not work? She must. But, how can she be sure that Howie is not asleep, or that he is, if awake, not lost in thought so much that he would not hear her talking about it? How much of Howie's few days on Summerisle is just an act? How much is believed by at least the younger folk?