the land of the blind

Parts of After the Dark work, but the whole is lacking... something.

One problem: the bunker scenario that drives the film doesn't feel like a last day of senior philosophy class exercise, especially at this international school in Jakarta where, Petra tells us, all the students are overachievers. It feels like a day one exercise. Seriously, I think I used the life raft exercise on either the first or second day of my middle school debate class, and the premise is the same. Given a group of characters with particular occupations (and in our exercise, each with a particular piece of equipment from which he or she could not be separated), we had to limit the pool to as many as the raft could carry. This is not a complex philosophical exercise. It's about as basic as the three examples given early in the film--the trolley problem, the ignorant bliss problem (I wasn't familiar with that one but it seems pretty basic), and the infinite monkey theory... which really, that last one has nothing to do with philosophy; even in the film, they don't connect it to philosophy but use it as a way to understand eternity, which also has no link to philosophy. I think Huddles (the writer/director) just wanted to throw that in because he found it interesting. I know I used the infinite monkey think in an impromptu speech at least once... except I used it as a way to dismiss theory in favor of practical reality; in this case, there were two practical exercises that worked with the infinite monkeys. First, there was a computer model that could run iterations faster than any actual monkeys could, but the flaw in it is that if the "monkey" managed to get any string of characters "typed" that matched up with any Shakespeare it would be kept and if it didn't, it would toss out the characters and start again. After some huge number of iterations, a single Shakespearean sonnet had actually emerged, once. Second, there was an experiment--at a Chicago zoo, I believe--in which a computer was set up just outside a monkey habitat, the keyboard where the monkeys could reach it. After something like a day, they had managed a broken keyboard and a screen full of the letter S. The problem with trying to imagine infinity or eternity is not that its difficult but that its pointless. Unless you're into some theoretical mathematics or something, these are nothing more than words that fill in for ideas bigger than we ever need.

The ignorant bliss problem is interesting but not particularly philosophical. The version in the movie is simple: you're hanging off the edge of a building, you call to your friends for help but they get to the edge and are too scared to help you, you fall but you survive. The problem then is would you have been better off having never tested your friends? For me, the answer is simple. It is good to know what your friends are actually capable of on your behalf, but their inability to step to the edge of a building should not be reason to dump them from your pool of friends. This is not a philosophical question--though the question of being "better off" frames it as one.

The trolley problem is a better philosophical exercise, something these students should have dealt with a long time ago--my philosophy 101 class in college got the trolley problem out of the way on day one. The basic setup, in case you aren't familiar: a trolley is speeding down the tracks and there is a group of people on the tracks who will be killed if struck; there is a lever that will divert the trolley to another set of tracks where only one individual will be killed. Should you activate that lever? One of the students immediately chimes in here the movie to point out that utilitarianism suggests you should because the group of people are worth more than the one. Mr. Spock would concur, I suppose. Again, this namecheck of utilitarianism seems like Huddles took a basic philosophy course, took some notes on day one and was so enamored that a) he never attended again and b) he immediately got to working on a script--I don't think I mentioned yesterday that After the Dark was originally called The Philosophers. The original title is a bit pretentious but at least accurate to what the movie is trying to be. The title it bears now makes it sound like a horror film--I was hoping that, if not a horror film, this was actually about a group of students surviving in a bunker after a nuclear cataclysm. Alas, there was this instead. Don't get me wrong; the film is not awful. It's just a little trite, obvious, and the tacked on coda(s) are extraneous.

And some of the plotting is lazy. For example--minor SPOILERS ahead--part of the lead in to one of those codas comes from Mr. Zimit having manipulated the roles for two of the characters for personal reasons. This is where the suspicious coughing that I mentioned yesterday comes in. I almost would have rather had Mr. Zimit be dying than the real reason. He coughed to cover up how he was manipulating secret compartments inside the box out of which students were drawing the cards with their roles on them. Thing is, if you've got a magic box with secret compartments, chances are that thing has been made so that the compartments open and close without making noise; if magicians were always coughing as they opened their magic boxes, we would be rather suspicious. It is only much later that James is suspicious and asks about the coughing. As far as the script goes, that is the entire reason for the cough--so James will question the box later, because Huddles had to add an extra element of plot to frame the philosophical exercise. It gives us one of the codas and undercuts Mr. Zimit's insistence on logic, which is a big part of why some folks on IMDb call this "hippie crap." Petra's choices for the third iteration of the bunker exercise is a nice, touchy feely, the-human-condition-is-to-live-not-just-survive response to Mr. Zimit's hardline logical approach. Except, even her choices are undercut by two things--more SPOILERS follow, of course. First, one of the other codas deals with the character of Chips--a carpenter in his bunker role--describing what happened with the group that didn't get into the third bunker. It's amusing but a bit immature for an overachieving senior; he kills off the various males in his group arbitrarily and proceeds to live with six females as if they're his harem (even though his bunker character's secondary trait is that he's sterile. The somewhat low brow premise here undercuts a lot of the seriousness the rest of the film has targeted. The second thing that undercuts, specifically, Petra's choices (she gets everyone to agree to her picking who goes in rather than everyone voting, and they go along with because... reasons--for the third bunker. She chooses the options that make the stay in the bunker more pleasant as opposed to being more able to "survive" and "rebuild" afterward. But, choosing a pleasant environment--for example, she chooses the opera singer so they can fall asleep to music--is selfish, which Petra has not been prior to this. The other problem with her choices is in how they relate to the premise to the bunker exercise itself. They are supposed to choose ten people to stay in the bunker for a year because that is what it can support, with food and water and air. If Petra's point is to have them all live and, according to Mr. Zimit, not have a chance at survival afterward, why not just put everyone into the bunker and live even shorter. After all, she tells Mr. Zimit, "We live briefly, but we don't mind. And when it's time to die, we don't resist death. We summon it."

It's a nice little summary of something I've argued for in this blog time and time again, something Phil Connors would understand. Life is temporary... a far greater idea to fathom than eternity, to be sure. So, yes, we should live and not just survive. But, choosing the wrong candidates for the bunker makes Petra, ultimately, as petty as Mr. Zimit in insisting on the right candidates. In the end, this pettiness is the point to the movie, but it shouldn't be. The majority of the film seems to want to be a serious discussion about who we choose to value and why, but in the end, our lead character made her choices simply to make a point to Mr. Zimit because--SPOILERS, again, and really you should expect them--they had (or still have) a relationship and she is going off to college in America with James instead of staying in Jakarta to be with Mr. Zimit. Seriously, that is what the film boils down to after spending so much time on something bigger--a love triangle. 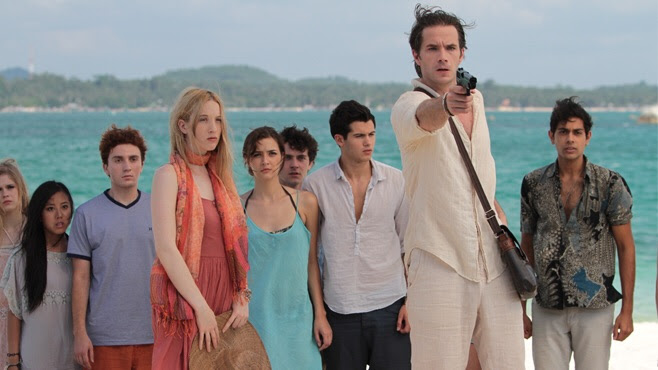 Maybe there's a place for love squabbles to take precedence over the survival exercise. I mean, that is essentially the setup for The Walking Dead or just about any zombie film--humanity's issues keep us from working together to survive. I'm reminded of the movie The Hole, in which some teens get locked in an underground bunker and, it's been a while since I've seen the film, but I recall their personal relationships and squabbles being a big part of their problem right along with survival or escape. There is a place for the human side to get in the way of the survival side, for emotion to trump logic. It's just, Huddles (as our implied narrator) is almost as insistent on logic as Mr. Zimit is, and then undercuts it not as a plot point but an afterthought. He undermines his own structure when Petra's humanist approach to the third iteration makes the point better than anything in the codas does. In fact, if that third iteration had not been purely Petra's choice but voted in based on her suggestions, explained for the class instead of for Mr. Zimit, the pettiness would have been a lesser thing. Additionally, as one could argue--though I don't think anyone in the film makes this point--the failure at breeding in the second iteration may come from the stress of the situation and the less stressful environment in the third iteration might allow for successful breeding. You do not need engineers to survive or rebuild society. Anyone can build a basic structure. The orthopedic surgeon is useful, of course, but poets and harpists and opera singers should not be dismissed outright because they are not useful. They are still humans and humans have ideas. A logical set of choices for the first iteration...

Actually, my explanation for the choices may take a while. I will save that for tomorrow.