it's your civic duty

The Grand Seduction, like any movie—seriously, read back through this blog and you’ll see it time and time again—tells us something about gender, gender roles, gender expectations; and it also tells us something about living in a conservative, capitalist world. These two things twist together in the subplot involving Brendan Gleason’s Murray and his wife.

We learn right away he is not only cashing his own welfare check, he is also cashing the check of a dead friend—he insists that as long as that friend remains on the government books, he has an moral duty to keep cashing those checks (and he has “power of attorney” paperwork, though it’s not clear how legal that paperwork is). Still, he wants to work. That’s the world in which Tickle Head exists, a world in which everybody (even the characters who seem much too old for factory work) would rather have a job—even an oil company job—than welfare. We’re presented Murray and his wife as a sort of counter to the flashback to Murray’s childhood home that begins the film; where Murray’s father (and the other men of Tickle Head) would spend the day working hard as fisherman then come home to their loving wives and, well, rather noisily have sex each night, Murray and his wife seem a little less... content, happy, attached to one another. Murray’s energy seems concentrated on loving Tickle Head itself. He is one of the only people who attend the village meetings. When the mayor moves his family “into town” (which means nearby St. John, Newfoundland) secretly one night, Murray becomes de facto (and maybe somehow actual, though we don’t see the process) mayor. As much as Murray (and, by extension, everyone else in Tickle Head) wants to work, he loves Tickle Head too much to leave.

Really, that is what the film is about. Murray loves the (“not a”) village so much that he considers it his civic duty to save it. And, his love affair with Tickle Head he tries to pass on to Paul (Taylor Kitsch’s Dr. Lewis, whose first name I didn’t remember yesterday, and IMDb was no help). Using what he knows about Paul—by, among other things, tapping the phone where Paul is staying in Tickle Head—Murray sets up the villagers to transform their home into something Paul will love and manipulate Paul into loving it. 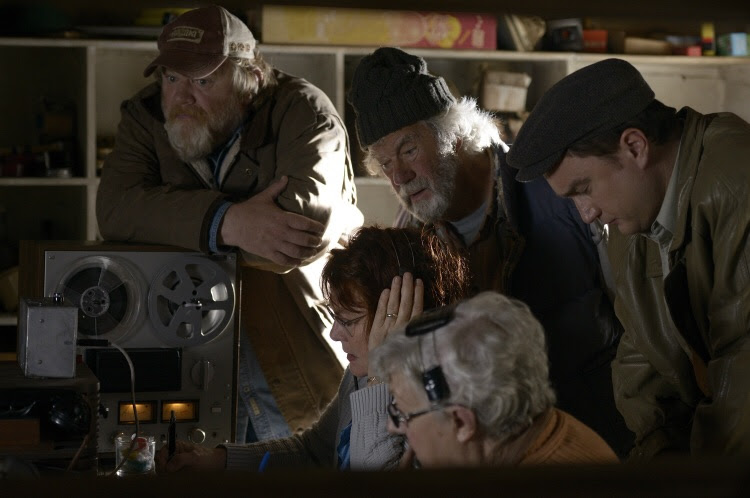 Basically, Murray is Phil Connoring Paul, just not into a love affair with him but with the (“not a”) village. As I noted yesterday, there are hints of a cinematic spark between Paul and the postmistress, this film is not about that. That’s actually a good reason why Paul’s fiancee quite rightly should not be a character that we actually see. His relationship with her is not what matters because that stands in the way of his relationship with the postmistress. What stands between him and a relationship with Tickle Head is quite simply the fact that he has someone, anyone, to call back home. The details might just attach us to the fiancee or distract us from Tickle Head. It is vital to the plot that there be no substantial attachment between Paul and the world outside Tickle Head. In fact, we first meet him at the airport (one of only a few scenes that take place outside Tickle Head at all) he’s on the phone with his fiancee but that relationship is immediately undercut by a flight attendant saying, “Goodbye Paul.” The implication being: Paul has been flirting with the flight attendant. He may be engaged but he’s not engaged. He also just finished his residency as a plastic surgeon. He’s in a liminal stage, a transition period in his life. And Tickle Head calls out to him. Murray calls out to him.

But, I was talking about Murray and his wife.

While Paul’s fiancee is unseen, we meet Murray’s wife. We see her go “into town” for work, which at first doesn’t seem like that big a deal. But, then we learn that going “into town” for work means she has taken an apartment in St. John. She has left her husband. Murray seems to think she will immediately return if he can save Tickle Head (and he turns out to be correct). Still, when news that she’s leaving reaches Murray’s old friend Simon, he asks Murray, basically, now that his wife will be the one making the money, who will make the decisions? Who will “do the driving”? To this one, he adds, specifically, “in bed.” It is not just Simon but the film itself that suggests Murray has been emasculated by his wife’s leaving, by his wife working, by his not being the breadwinner any longer. Meanwhile, Paul exists as a victim to Murray’s lies. His stay in Tickle Head is pleasant, there is that spark between him and the postmistress, but the Tickle Head he sees is a lie. As much of a lie as his relationship with his fiancee. And, it’s a little limited, but I’d guess the reason Paul has specifically just finished his residency in plastic surgery is because of the association between plastic surgery and, well, lying. Lying about who you are...

Specifically, lying about who you are in order to impress everyone else, to be attractive. Tickle Head is made over to attract Paul—not surgically, but still. The difficult thing about The Grand Seduction is figuring out if we’re necessarily supposed to be okay with it. If everyone is lying to everyone else, can we pass judgment on some lies but not others? Is the film accepting lying as something people just do? I mean, Murray is basically lying to himself about being able to save Tickle Head, but his lies push everyone else to lie—and steal—until eventually, his lies bring forth the truth he’s been seeking... I think the film may not give us enough reason to think that Paul is seeking that same truth. When he says he became a doctor to help people, it is just dialogue; it doesn’t follow a nice sequence like that one in Doc Hollywood with the house calls; it doesn’t flow from the character, only the script. If we look at this as a film about Paul, it just doesn’t work. Not really. But, as a film about Murray, it does work. He wants to work, and he takes on the task of saving Tickle Head (and saving his own marriage) because he wants to world he grew up in. He takes on this task and he works for it, he lies and he gets others to lie and he makes things happen. Lies become just one more tool in the toolbox.

Lies aren’t bad... as long as they serve the community.

The factory comes to town. Murray’s wife returns. Paul sticks around (and starts a relationship with the postmistress). Everything is happy.

It’s actually a strangely cynical message in such a blatantly wholesome film—the ends justify the means. Paul’s fiancee cheated on him, but do we get to know the reason? No, that would distract. The folk of Tickle Head lie to Paul, and they do it to save their community, a community that is movie-small-town-cute and -pleasant.