men and women use and abuse each other all the time

Robyn Paris, who plays Michelle (Lisa's friend), boils down the plot of The Room for backstage.com quite simply: "A devious girl cheats on her saintly-yet-freakish [soon-to-be] husband with his hot best friend, [soon-to-be] husband finds out and goes ballistic." That is all you need to know about the plot of this movie. She describes her first day on the set:

As soon as I got there, [director/producer/writer/star] Tommy [Wiseau] handed me five pages and said, "We are shooting this in twenty minutes." Sure enough, a few moments later, I was on the set wearing the same clothes in which I had arrived and we were shooting the infamous "chocolate is the symbol of love" scene. I never saw a script, never knew the context of the scene we were shooting, and never even knew who the characters were. (None of the actors ever saw a script for "The Room." Tommy was worried that we would steal it.

That is all you need to know about the behind-the-scenes... well, no, you should probably know that there's a chance Wiseau made this movie to launder ill-gotten money. You should know that while the line reading in the film may be mediocre at best and is often just plain awful, they did have rehearsals six months before shooting. Wiseau also recast Lisa a few times (Juliette Danielle was supposed to play Michelle before she was cast as Lisa), fired crew members for... well, reasons. And, when Kyle Vogt (Peter the psychologist friend) quit, Wiseau simply cast another guy in his stead and ignored the fact that the audience might actually notice.

What else should you know?

Gotta take a few deep breaths before this one. There's probably a legitimate argument below, but it's hard to even take myself seriously while this movie is playing. But... okay, serious mode. 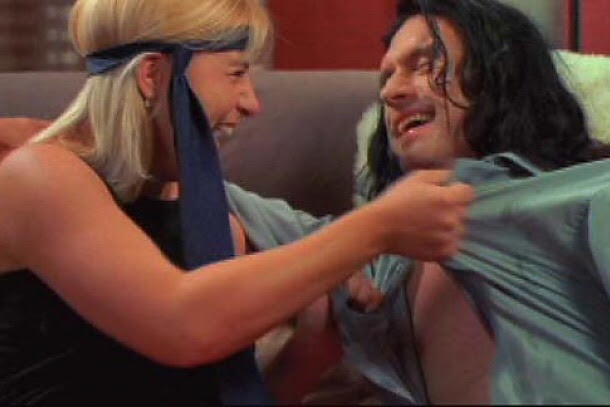 When Lisa gets Johnny drunk, she puts on his tie. But, wrapped around her head, Rambo style instead of around her neck. Since Wiseau clearly likes his symbolism--the football for brotherhood, perhaps, as Ned Lannaman at the Portland Mercury suggests--and takes his research and preparation seriously--he tells LAist:

I took a lot of stuff from real life, but the characters are fictional. And I did research. For example, drug problems. What are the drugs in society? When a person is born, how does this happen? What is the cause and effect? Within a relationship where is the third party? ... Is it okay for somebody to love somebody else? So, it's all this complexity in life that helped create The Room. And there was a lot of research before that.

--we can assume this is not just some random choice on the part of Juliette Danielle. She is deliberately donning a piece of his costume because she is attempting to remove his power over her by getting him drunk and lying about him hitting her. What better symbol of Johnny's place in society, as a banker, as a white male, than his tie, really? (Lisa with his tie around her head is also the first scene to which he flashes back before his rampage at the end of the film.) The film, through most of it, is built around a dynamic in which Lisa is the manipulative villain, if there, indeed, is one. She lies to Johnny, to her mother, to herself, in order to gain some sort of agency over her own life. As her mother tells her, "you can't support yourself." Actually, in context: "He supports you, he provides for you, and darling, you can't support yourself." This is the role that Johnny has put Lisa into, that her mother has put her into, the society has put her into. But, on the other hand, as Lisa explains to Michelle,

I need more from life than what Johnny can give me. Suddenly my eyes are wide open and I can see everything so clearly. I want it all.

Michelle accuses Lisa of sounding like her mother, "being so manipulative" but Claudette (Lisa's mother) has proven to be a kind, loving woman who just wants her daughter to have a safe and secure future, "financial security." This woman has recently been diagnosed with breast cancer but she is focused on her daughter's life. She confides in Lisa,

You expect to be happy. I haven't been happy since I married my first husband. I didn't even want to marry your father... All men are assholes. Men and women use and abuse each other all the time, there's nothing wrong with it. Marriage has nothing to do with love... Don't throw your life away just because you don't love him.

Claudette is not manipulative. She gets it. She was married at least twice, and she knows that relationships take effort that her daughter is apparently not willing to put into her pending marriage. She's trying to save her daughter from the patriarchal system that has Johnny treating Lisa like a princess and expecting her to owe him something for it.

This film is neither feminist nor anti-feminist (if Lisa died in the end instead of Johnny, we could assume an anti-feminist message), but it seems to be suggesting that men and women are pretty much screwed if they cannot be bothered with being honest with one another. In the end, even Mark rejects Lisa because she has proven dishonest, an unsafe choice as a partner.

Lisa is not, however, the villain. She has been driven to her choices by society telling her that romantic love is more important than stability and the security her mother wants for her. In the end, I think The Room is asking us not "Is it okay for somebody to love somebody else?" Not exactly, anyway. But, something like it. And, more importantly, what do you do when someone loves you and is willing to provide for and take care of you? What matters more, romance or security?