jesus, kid, you can drive

It's time, ladies and gentlemen, for the classic Groundhog Day Project exercise--the Christ-Figuring. I don't mean to spend too much time on it, though. I'm less interested in the score than in why a film like Speed Racer would need a Christ-Figure (assuming that it has one).

He is not central to the film. That is because he is definitely, and quite deliberately an outsider. 2/3

He is not divinely sourced, but he is sourced into the story from outside. I'm going to give him this one. 3/4 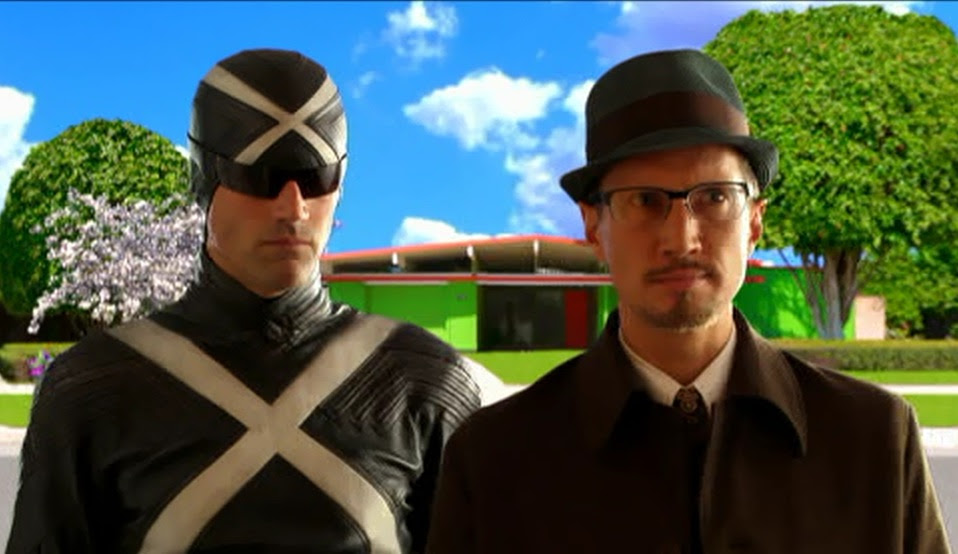 No bonus point for miraculous birth, but Racer X definitely has an alter ego and the special/normal division. 5/6 (For those of you new to this, the bonus points are not counted in the overall denominator, but do allow for additions to the numerator. It's just... a thing. Deal with it.)

Racer X certainly has a cast of supporting characters--his twelve associates [it doesn't have to be 12]--or he would if this were his story. Speed, Trixie, Pops, Mom, Sparky, Inspector Detector, Taego, Horuko, Minx, Spritle, even Chim Chim (actually comes close to 12). 6/7

Going by the age of Scott Porter--

(By the way, I have neglected to mention that Taylor Kitsch, star of The Grand Seduction, the film that preceded this one in this blog, starred in Friday Night Lights along with Scott Porter, who plays the younger version of Rex here.)

--Rex/Racer X... should I have SPOILER-tagged that one? Anyway, Going by Porter's age, Rex comes close to Kozlovic's holy age criterion. Porter turned 28 during production, so he's not too far off from 30. In fact, Speed specifically mentions how Racer X appeared 2 years after Rex "died" so Racer X debuted at age 30. Matthew Fox, who plays Racer X turned 41 during production... the two actors, while 13 years apart in age, share the same birthday--July 14--so it makes sense that they could play the same character. I'm giving them this one. 7/8

There is no clear Judas-Figure for Racer X. Given his girlfriend's name, though--Minx--I will grant him the point for Mary Magdalene-Figure. 8/10

No bonus point for a Virgin Mary-Figure but I will grant Inspector Detector the John the Baptist-Figure tag. 9/11

Racer X owes his entire existence to a death and resurrection that allow for triumphalism. He definitely operates in service to lessers unbeknownst to them; when Inspector Detector brings him to the Racer house, Spritle thinks they're all in danger--Racer X is "the harbinger of boom." Rex made a willing sacrifice to become Racer X. 13/15

No bonus point for torture. If Racer X was ever presented to Cruncher's piranhas... But, he isn't. No bonus for stigmata either. I will, however, give him the bonus point for atonement; arguably, he helps Speed in order to make up for abandoning him years before. 14/15

I'll give him the innocence point because he is working with Inspector Detector and the Corporate Crimes Division of the Central Intelligence Bureau when he is thought to be a bad guy. 15/16

No cruciform pose that I've noticed but Racer X's costume is all about the cross associations. 16/18

My impulse was to not give him the miracles and signs point because he doesn't do much that is more miraculous than anything Speed does. But, then I remembered the bomb early in the film, the quick response breaking of the broom handle, the exploding go-kart. That shit was impressive. 17/19

No point for simplicity or poverty. Nor Jesus garb... In fact Speed's white and blue racing outfit suggests the garb of good far more than Racer X's black costume. No blue eyes either. 17/23

The only holy exclamation in the film is today's title, and Racer X says it, referring, if to anyone, to Speed. (Although, to be fair, Speed does refer to Royalton as "the Devil.") 17/24

He doesn't score as well as, say Superman in Man of Steel or Rambo in Rambo: First Blood Part II, but 17 is not half bad. I would argue that Rex Racer/Racer X is, indeed, a cinematic Christ-Figure. And, I think a movie like this, with its technicolor dream imagery operates quite well with a Christ-Figure in its midst; that the film is so deliberately unreal evokes not only dreams but religion. What better place for a Christ-Figure than in what is essentially a fantasy film. This should be a sports film, structurally, but it doesn't really work that way.

I haven't really explored sports films in this blog yet but it occurs to me that the Christ-Figure could actually fit quite well in a sports film. The team coming back from behind could use a Christ-Figure--a star player like Jason Street before his accident, perhaps--to help them win. Speed needs Racer X to get through this film. And, there's a reason we need a Christ-Figure to get through some stories--we want the miraculous, we want the larger-than-life. A movie like this should been more successful than it was. Especially, since this was the Wachowskis coming off of the Matrix films and giving in to the unreal. As Digibro says:

...it's world resembles ours enough to be relatable but less realistically than even the alien worlds of Guardians of the Galaxy [and] it doesn't even pretend to take place in our version of reality... Everything in Speed Racer operates on the emotional and symbolic level before it bothers to work on the rational level.

That's how a fantasy needs to be, that's how a story with a Christ-Figure ought to be. It's what we want when we don't want down-to-earth, realistic stories. Just watch Speed leap out of his moving car and land on his feet. This isn't reality. It's something else, something better, something we want our reality to be.

Especially if we're kids. Every toy car I ever played with as a kid could do the crazy jumps that Speed does with the Mach 5. Every toy car I ever played with as a kid could take turns in such a way that momentum and inertia and drag and gravity are forgotten. Just like with the Mach 5 here. This movie was made for little boys who love cars and the men that used to be those boys. It's got elements for everyone else, sure, but that's the immediate audience. And, I don't know about all the other little boys who had toy cars or toy... anything, but there were always certain toys that would save the day when the rest were in trouble. I swear I had Christ-Figures in my room all the time, not because I was particularly religious (obviously) but because that is just a thing we want, a thing that (maybe) we need for the action to make sense... or maybe making sense isn't the appropriate description. It's not about making sense. That's the point. It's about feeling right. The long lost brother who fakes his own death and now returns to save the day--that is not the thing of rational experience. It's pure feeling.

And, Speed Racer evokes that feeling, and the joy of childish play. The bright colors, the unreal physics--this is far from the cynical darkness of so many other films, even supposed kids' films. This is something... special.

It's got a few things blatantly wrong with it, but it's definitely special.