already been expelled from someplace else

Then, there was The Principal. Actually, in movie terms, this movie came before Lean on Me.

It's a different beast, perhaps, because it's fiction. Doesn't start with school. Rather begins in a bar. Rick Lattimer (James Belushi) is clearly an angry, violent man. Making that clear right away, as he goes after his wife's divorce lawyer/new boyfriend with a baseball bat.

Afterward, cop asks him his occupation. Wait for it--school teacher. We're supposed to be surprised. I'm not sure why we should care (except of course we know already this is a movie about a principal (who could very well also be a teacher).

He's also a disgusting bachelor-type. Smells the bad milk, is revolted, puts it back in the fridge, for example.

(Box office aside: I saw this movie at The Academy, a second-run theater in Pasadena, so I'm not sure when I saw it. But, looking at the weekend it came out, I like that I saw all of the top 12 (The Principal was #4), but only about half in the theater.

I thought I remembered a double feature of The Principal and Lean on Me at The Academy, but as far apart as they were released--a year-and-a-half--that's really unlikely. Maybe I just hoped for it.)

Joe Clark (the principal behind Lean on Me) would have already made headlines, so I wonder if there isn't some deliberate coopting of his story here, except it got twisted; the black guy (Louis Gosset, Jr. as the head of security, Jake Phillips) is sidelined a bit for some other script about a hapless white guy who is going to have to be the savior of Brandel High. The worst students are, of course, darker than Lattimer. Then again, so is his love interest (even though the first act almost sets the stage for a redemption that will earn him back his wife), Ms. Orozco (Rae Dawn Chong).

I wonder if a script about Joe Clark wasn't making the rounds in Hollywood, and someone thought it was a better sell with a white guy center stage. 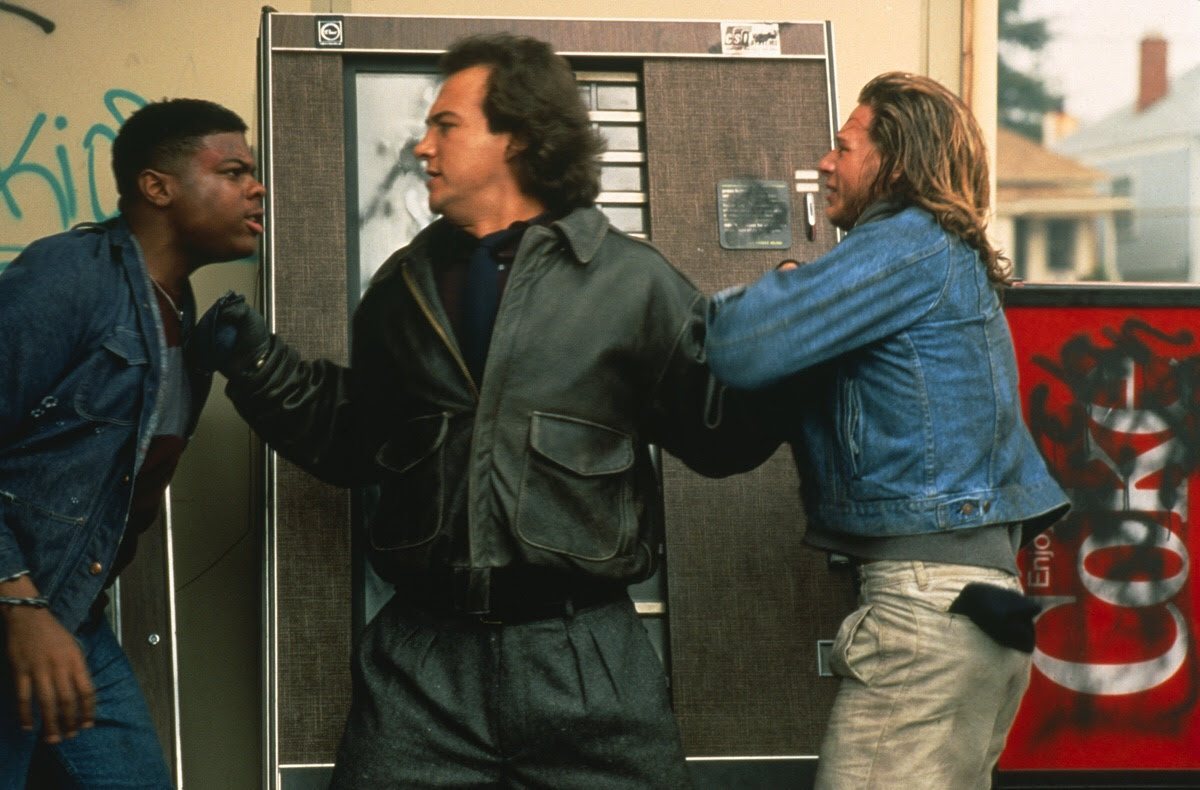 Of course, there's a home visit. And, I get this feeling that Hollywood thinks you are a failure as a teacher or a school administrator if you cannot a) remember everyone's name or b) visit them all at home or place of work to demonstrate explicit caring and make everyone's lives better individually. Nevermind how many students that instructor might have (and certainly nevermind the number of students an administrator has), of course. I don't know about 1987 numbers but I know when I was observing high school classes two years ago, I observed four different instructors, each of whom taught six classes a day with close to 30 students in each of those classes. Make one home visit a day (and take the weekends off for, you know, writing 30 lesson plans a week) and you might get to each student by the end of the year.

As The Principal sets itself up to be a straight action movie in the vein of a Steven Seagal film or Death Wish or Dirty Harry film, I'm less interested.. Instead, I'm looking to Robert C. Bulman's (2010) "Class in the Classroom: Hollywood's Distorted View of Inequality," in which Bulman says,

Many of the urban school films do acknowledge that inner-city students face the challenges of poverty, racial discrimination, and poor schools. However, the films portray the individual attitudes of the students as the primary obstacle to their academic achievement. These students don't have the right manners, the right behavior, or the right values to succeed in school. They have low aspirations and a low self-image, and they believe the odds are stacked against them. (p. 52)

This is America, of course; we must ignore the reality of the situation, the economic, social, and cultural factors. If you are not succeeding in school, it is your fault for not rising up above your circumstance. The problem is not the decaying infrastructure, nor the defunded school programs, certainly not the focus on standardized test scores. The problem is your attitude. It's Joe Clark's motto writ large--"If you do not succeed in life, I don't want you to blame your parents. I don't want you to blame the white man. I want you to blame yourselves. The responsibility is yours."

It's a fucked up policy that negates the urge to offer help. (And it's contradicted, in Lean on Me when Clark worries about Kid Ray or Kaneesha.) Here in The Principal, Lattimer tries to care, but only about certain individuals, a few tokens so he comes across as a better man than the drunk baseball bat-toting guy we saw at the start of the film. When he's got to turn violent, riding like a badass outlaw on his motorcycle, we can understand he's not just a sociopath; he's got feelings, he cares.

Bulman continues: "The schools, therefore, cannot effectively educate these students. The reproduction of their low social status seems inevitable." In reality, we don't expect things to get fixed. We just hope we can get our kids into a better school. In the movies, those token students are what matter. One is beaten nearly to death, here. One dies in Dangerous Minds, but just so we know this is serious. A few others succeed and in movie terms, that's enough. Test scores are good. Some high schoolers can appreciate poetry. The world has righted itself. It's just that simple.