every update of reality

Let us leave (presumably) the evil high school girls behind. (Presumably because I haven't seen Struck by Lightning before.) Today, our focus is a high school boy, Carson Phillips (Chris Colfer).

(And, admittedly, this movie was recommended by my daughter a good while ago and I have put it off.

Which really shouldn't be parenthetical, actually, because I want to take this opportunity to a) write a bit about the movie as it plays and b) out my daughter as a crazy fangirl... except, as you will see, my point below is probably going to be that fangirls are not crazy. Plus it's a bit sexist to separate fangirls from fanboys, anyway.)

Carson is rather amusingly sardonic and sarcastic--i.e. the best kind of cinematic high school character. I don't need someone who is you know, nice, and genuine. Less Rita Hanson, more Phil Connors. Just how I like a character... at least a comedy. 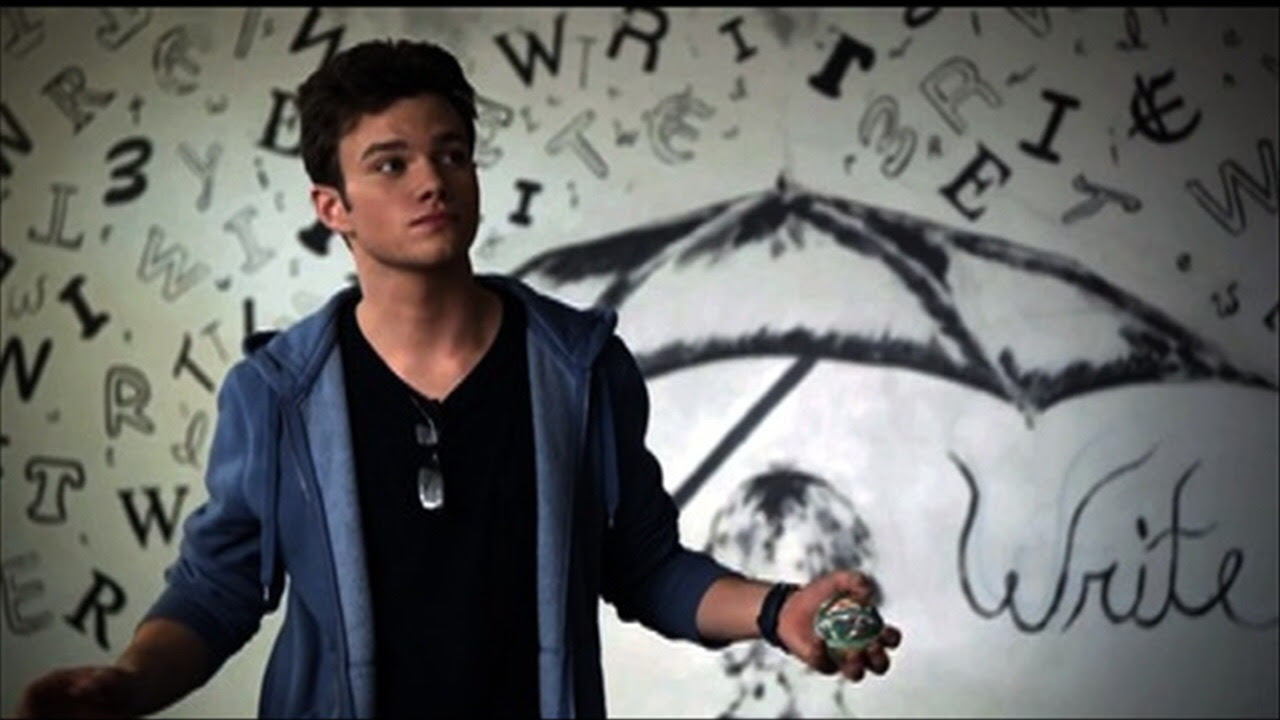 (So, Saer--my 12-year-old daughter, for those of you who have not been following along--found this movie (and the book,,, that came after (?), written by star Chris Colfer, who you might know from the television show Glee. And, trust me, Saer definitely knows him from Glee. Last month, she got to meet him at a book signing and she tweeted--

Meeting @chriscolfer was literally the best day of my life. He's so kind and sweet in person!!

Followed by a few hearts, but I'm not sure emojis work here.

She has watched many of the episodes of that show numerous times (and has, as any good fan, written off a few episodes as not worth watching again). She can quote lyrics and dialogue from that show better than... well, most anyone (though, there conceivably are more obsessive Gleeks, but she probably knows them, and they probably follow her Klaine-centric Instagram account...

When a friend asked why I had so many pictures of Darren Criss and Chris Colfer on my phone I replied, 'Because Klaine is sexy.'

For the record, Bradlee Scott over at hypable apparently thinks fandoms like Klaine can ruin a television show... but, it's more like one fandom didn't like his fandom and he got bitter. Thus goes society, thus goes the world, and wars were made over less, I'm pretty sure.)

The movie is straightforward enough. Starts with Carson being, well, titled. He dies, and he narrates us back into first his childhood then more recent events in his high school life. Not a lot of voiceover, just enough to direct us backward, then the story gets going.

(So, I'm reading through some of Scott's piece and I had to ask Saer what Seblainers were--he writes:

I remember the world in an uproar when the Klainers and Seblainers would get into fights over the validity of a relationship. Klaine fans weren't satisfied that they ship was canon--they would rip anyone a new one if they didn't like it.

--and 1) she was horrified by the mention of Seblainers, 2) she told me that's the ship name for Sebastian and Blaine then 3) she laughed knowingly as I read her that quotation out loud and she understood it all too well... though 4) she vehemently denied the canonicity of Seblaine.)

Carson starts a literary magazine at his school because his submission of his journalism pieces with his application to Northwestern University wasn't good enough.

(And, I still haven't gotten to the point today... which will probably continue into tomorrow. And beyond, because really, why else do I watch movies if not for the parasocial relationships?

Carson blackmails other students to get involved with his magazine. If this were a more serious film, he might be setting himself up to be killed by one of these student rather than lightning, the way he's going at this.

(Some of you might now know what I'm talking about--parasocial relationships, I mean. I'm sure you can guess what a fandom is. What it means:

Horton and Wohl (1956) first described the idea of a king of face-to-face interaction between the performer and the audience member as parasocial interaction. They borrowed Kenneth Burke's (1937) phrase "coaching of attitudes" to explain that through various televisual techniques, television [and I would add movie] audiences are encouraged to feel as if they are a part of the world taking place--

And, I go back to the Lost Experience in between seasons 2 and 3 of Lost. I followed the crap out of that thing, sought out clues with others in that fandom, and wished I was at Comic-Con when the game played out its climax there.

(Sidenote: I wish every year that I am at Comic-Con, but it has become tradition that I never go, ever. I have been to smaller comic book conventions--even had a table at the Alternative Press Expo in 2003--and a few The X-Files conventions, and at least one Star Trek convention... plus there was that weekend (starting with Day 183 - where are you going?) in Woodstock, Illinois for Groundhog Days for this blog.)

I've been a Star Wars and Star Trek nerd, I've read more than my fair share of comic books--still read a few regularly--and I've obsessed over plenty of television shows: Highlander, the aforementioned The X-Files and Lost, more recently Doctor Who, and probably a few others. I've had my parasocial relationships. Oh... back to Horton and Wohl:

...on their television [and I would add movie] screens. The television persona is relatively consistent and stable from episode to episode [from resumption to resumption], and audiences quickly form attitudes about particular television [and movie] personalities via a form of Burke's (1950) "collaborative expectancy" (p. 58). The audience must accept the explicit and implicit terms of the program and must be able to "play the part" that those terms require. (Schiappo, Allen & Gregg, 2007, p. 302)

Perfectly normal to form relationships with the fictional characters with which we spend time. And, far easier than with IRL characters.)

Meanwhile, in the movie, Malerie (Rebel Wilson) had a great bit that fits with so much I've said in this blog over the past couple years--and this topic, this movie, will definitely continue into tomorrow... (or possibly the next day [I'll link to it when it happens so future readers will have it far easier than my loyal readers] because I think I've got something (slightly) else to write about tomorrow). Anyway, Malerie's response to Carson asking why she records everything with her video camera:

What isn't worth remembering? With good memories come bad memories and I've got a lot of both. At least this way I can fast-forward through all the bad stuff.

More on this movie on another day. More on parasocial relationships tomorrow.