you just fill in the hole

Stand and Deliver is distracting me from ignoring it to write about something else. Police in the office investigating a crime as Escalante (Edward James Olmos) shows up for his first day. Even if that's what really happened, it's one of those details that is too on the nose to be believable. (Like John Dillinger taking seventeen people hostage with a wooden gun--changed to only three people to be more believable in Public Enemies per Cracked's "5 True Stories Cut from Movies for Being Too Unrealistic.")

And, movie classes are way too short. The scene starts like it's the beginning of class, but like a minute later the bell is ringing. A little better writing/editing and we could get into class in media res, or, you know, leave the scene before the bell rings. Just because it's a movie set in a classroom doesn't mean we need to be dismissed by the bell.

Timeline is a little odd, too. He's been at the school "for a few months" and we've only seen him talk briefly about fractions and then about negative numbers.

And, I wanted to talk about parasocial relationships today, maybe, or empathy--how reading literature or watching movies can improve it. I also want to get at the negative side of what yesterday. Building myself out of movies almost came across positive, and that's not right. Well, it's not complete.

Like my memory of this film was not complete. I previously mentioned there being only one math lesson (the apple thing) in this movie. But, there are hints at and pieces of other lessons, and some very specific details, like the way the students chant "late" when someone comes to class late, that play like details taken from a more detailed account. Somewhere (don't know where, but read about it on IMDb, Olmos claimed that he wrote all of his dialogue and based it on what Escalante actually said in those situations. (Which means Escalante threatened to kick the shit out of one of the Educational Testing Service guys.) 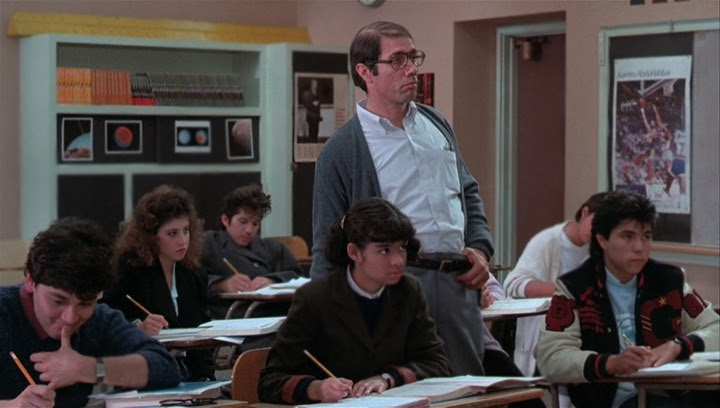 And, if I make the slightest effort, they all link to Groundhog Day now. There's no teacher, no classroom, no school in Groundhog Day as you know it, of course. But, earlier drafts included a scene in an elementary school classroom, a teacher telling the story of the frog prince. This is how it goes in Ramis' second revision:

Phil is walking toward the exit when he passes a first grade classroom. The door is open and the TEACHER is discussing a story with the class.

TEACHER
So the princess picked up the
for and kissed him.

TEACHER
Now who can tell me what happened
when the princess kissed the frog.

LITTLE BOY
Her lips got slimed?

TEACHER
Okay, come on now. What happened
when she kissed the frog?

LITTLE GIRL
The princess kissed the frog and
the spell got broke and he turned
into a handsome prince and they
got married and lived happily
ever after.

Phil is leaning against the wall listening. There is something very arresting about the fairy tale, but finally he just shakes his head and exits.

Later, when Phil gets the chance to kiss Rita, he says first, "This one's for the Frog Prince" (p. 117). It's brief and a bit on-the-nose for the theme, but that's the way Ramis works sometimes.

Meanwhile, I figure there's something very arresting about fairy tales like Stand and Deliver... yes, I know this is based on a true story, and so is the movie I plan to watch tomorrow [but don't get to, tomorrow], but the structure is so Hollywood that the reality becomes almost irrelevant to our enjoyment of the story. Or rather, the fiction becomes almost irrelevant to our enjoyment of the reality. We take the film as reality while we're watching it, if it's a well-made movie. True story or not--that might matter later when we're reflecting on our edition of the film, but during... not so much. John Keating can be just as inspiring as Jaime Escalante as LouAnne Johnson as Glenn Holland as George Feeny or whomever.

If you're in school and you watch one of these movies, you wish that was your teacher, that you'd have someone teach math or poetry in a way that you actually got it, that you actually cared. If you're a parent, you wish your kid had that teacher. If you're and adult with no children, you maybe reminisce (or whatever the negative version of reminiscing is) about your school days and how horrible your teachers all were, except maybe there was that one teacher that everyone liked, that made class fun, or that taught you meaningful life lessons or made (INSERT SUBJECT HERE) easier to understand and appreciate.

It's too bad, though, that these great teachers aren't as big of heroes as so many other cinematic heroes and heroines. Maybe we'd care more about education in this country, value it a bit more.