i'd like to see you have a little direction

Though it came out four years earlier, Clueless is the counterpoint to Jawbreaker. Cher (Alicia Silverstone) and Dionne (Stacey Dash) are the nice version of the Flawless Four, the Plastics, the Heathers. They may be friends because they both know what it's like to have people be jealous of them, but they also care about other people.

Plus, Cher is awesome. Like her debate speech about Haiti:

So like, right now for example: the Haitians need to come to America. But, some people are all, "What about the strain on our resources?" Well, it's like when i had this garden party for my father's birthday, right? I put RSVP, 'cause it was a sit-down dinner. B ut, some people came that, like, did not RSVP. I was like totally buggin. I had to haul ass to the kitchen, redistribute the food, and squish in extra place settings. But, by the end of the day it was like, the more the merrier. And so, if the government could just get to the kitchen, rearrange some things, we could certainly party with the Haitians. And, in conclusion, may I please remind you that it does not say RSVP on the Statute of Liberty. Thank you very much.

I wish some of our rookie debaters on the speech team would have as good a grasp--if seemingly unresearched--on the logic of food redistribution. An Amy Heckerling-written debate case would be a thing to see, for sure.

Until mankind is peaceful enough not to have violence on the news, there's no point in taking it out of shows that ned it for entertainment value. 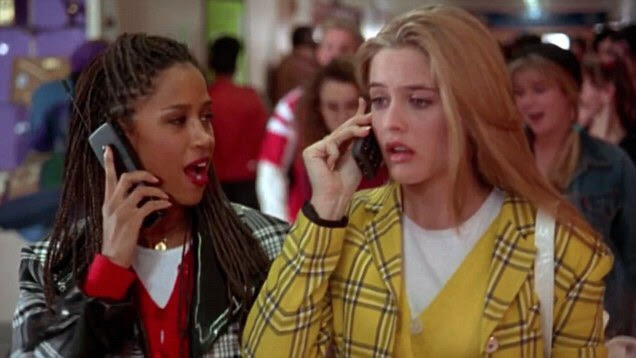 (I saw parts of this movie--especially the ending--far too many times as I worked at a movie theater in '95. It was #2 at the box office opening weekend. Our theater--the now-nonexistent United Artists Marketplace in Old Town Pasadena--had Clueless, Apollo 13 (#1), The Indian in the Cupboard (#8), Batman Forever (#10), Mighty Morphin' Power Rangers (#11), The Bridges of Madison County (#12), Judge Dredd (#13), Casper (#14), and Braveheart (#15)... except that doesn't make any sense. We had six screens. So, I suppose a couple of those were gone by then. But anyway, my point--I've seen this movie maybe a handful of times all the way through but dozens of times in parts.)

The structure of Clueless is interesting. I'd forgotten just how far into the movie Tai (Brittany Murphy) was introduced. Act One, Cher fixes up Mr. Hall (Wallace Shawn) with Miss Geist (Twink Caplan). The introduction of Tai pushes us into Act Two. The story is not about Cher helping out Tai; that's just one chapter in Cher's story (and Josh's (Paul Rudd) gradual attraction to her). The midpoint is the introduction of Christian (Justin Walker).

And, it looks like Act Three is going to be all post-Christian.

The interesting thing here, taking this movie in hand with Mean Girls and Jawbreaker, is that Cher is the popular girl being surpassed; imagine Mean Girls as Regina's story or Jawbreaker was Courtney's story.

Except, Cher is... Well, she's just as self-centered, but it's like she doesn't want to be. And, like some of the great heroes inn fiction, like Phil Connors, she figures out she was a better person on the inside all along.