we don't do schools

Feel like drifting. No school. No teachers. Just an old movie that might not even be any good. The Legend of Billie Jean. I remember enjoying it years ago, but I'm watching it because right after I mentioned it a few days ago I happened to see the DVD for sale cheap. Can't pass up coincidence.

I was just reading about how in the commentary track (to which I have not listened), Helen Slater and Yeardley Smith didn't remember how the movie ended as they were watching it years later. I, too, do not really remember where this movie is going. I know something's gonna happen to Billie Jean (Helen Slater, no relation to...) and her brother Binx (...Christian Slater) kills someone--

Which is happening now as I type about not remembering the details. So, Hubie (Barry Tubb) stole Binx' scooter and Pyatt, Hubie's father (Richard Bradford) just tried to rape Billie Jean, sort of, rather than pay the money she demanded for the damage done to the scooter. Now, they're going to go on the run along with Ophelia (Martha Gehman) and Putter (Smith) and... become famous somehow. I guess I'll just watch for a bit. (And then I get sidetracked in my head thinking about how Facebook conencts us with people. See, on Facebook, I'm friends with Peter Coyote, who plays the Detective in the film. On the down low, I'll admit, I've never met the guy, but he's a cool actor and an awesome sixties guy, and then that gets me to thinking about how I should get some good 60s radicals films into this blog, because as a history major, sixties radicals were my thing and just this past spring I got the chance to write another paper about the Weather Underground. Outlaws interest me. Have for a long time. If you were following along in June as I watched a whole bunch of Westerns, you might have noticed... for example when I watched Billy the Kid films (675, 689, 693). Maybe soon.)

Billie and Co. try to make a deal with Pyatt--contrary to my memory, he didn't die--with the detective there. It goes badly because Pyatt has Hubie and his friends there to... I'm actually not sure what he was trying to do, but it didn't work out. Now, Billie and Co. broke into a house to get some food and some preppy 1980s guy with a lot of AV equipment lives there and saw them on video. And, the movie takes a turn to the other part I remembered--something about the media...

A news report puts them at the scene of a truck stop robbery where they never were. Then, a Joan of Arc movie is on and AC guy--Lloyd (Keith Gordon)--tells them all about Joan and I'm wondering if we're supposed to be surprised that Billie Jean is going to have a makeover to become a proto-Imperator Furiosa.

Weird thing--Lloyd says Joan dressed like a man, but Billie Jean's short haircut coupled with the wetsuit (?), open in the front-- 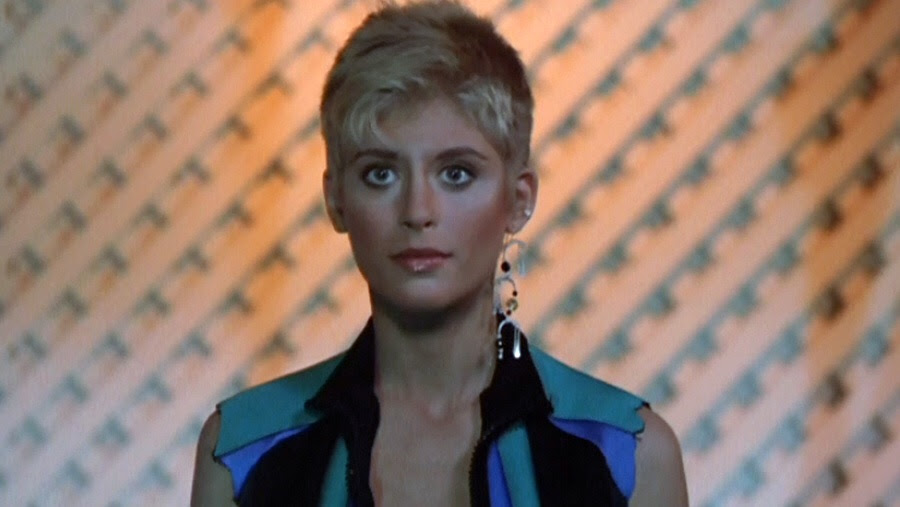 --does not make her seem very "dressed like a man."

And, I just learned there was a stage musical made from this story a few years back. I have got to hear that... or not. Photos from the show make it look very much like a parody: 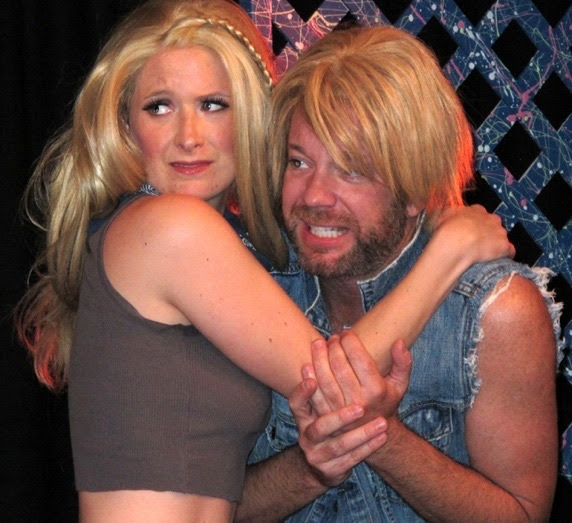 Billie, with a whole bunch of kids following her around because she's famous now, just happens by a house where a father is abusing his kid right then. Convenient for the plot, a little arbitrary. Guy lets his kid leave with her once he realizes who she is.

Then another guy shoots at their tires--he says--but hits the back window because there's a reward. The movie has the beats of a nice outlaw story but is lacking most of the detail. It's like a string of random events... rather than an actual plot.

Similarly, the Joan of Arc impulse, or Putter's first period being mistaken for her being shot (not to mention her asking when she can get a diaphragm in the very next scene)--these things just sort of happen, like someone wanted to make a feminist outlaw film and maybe nobody polished the script or something. It wants to be good. It just isn't quite managing...

And then it gets more interesting. I spoke too soon. The sequence with Billie Jean getting rides from a series of Billie Jean-lookalikes is actually a pretty good montage (with Pat Benatar's "Invincible" playing over it) for establishing her fame and her disciples of sorts. Beneatar's lyrics evoke a tone the film isn't quite achieving, but it works in a mid-80s kind of way...

Overall, I guess the whole movie is working in a mid-80s kind of way. The setup for the finale on the dunes is pretty good, too. As is Billie's Jean's confrontation with Pyatt.

All in all, I still like it. Very 80s, but pretty damn good for it.