him as he is

I don't want to talk about Son of Saul as a holocaust film. Not just because the director and star have been quoted in articles about how it isn't your usual holocaust film. They talk about the content. The content is good, sure. But, I'm more interested in the style, the format. In the same year that Tarantino, explicitly, and Inarritu, implicitly, (just to take two examples) are promoting filming out in the great wide open, with Son of Saul director Lazlo Nemes quite deliberately frames everything as small. We are forced by a narrow aspect ratio and a camera that never ventures far from our protagonist (until the end of the film, as it follows a child then leaves us alone in the woods). We look on the world of Son of Saul. From just behind or next to Saul Auslander (Geza Rohrig). When we look away, it is Saul's POV we take. 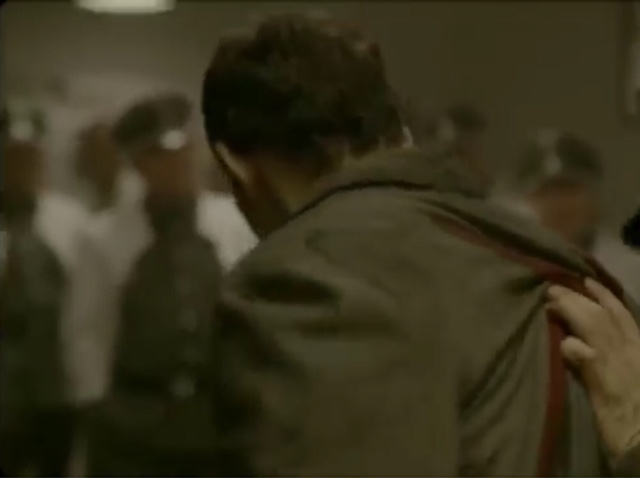 If it isn't obvious, this positions us in the audience firmly into the situation with Saul. There are no wide shots, no establishing shots but for the blurry one that opens the film. We are always with Saul. And yet, we don't know always what is going on in Saul's head. We do not know--without reading, say, the IMDb tagline or the title of the film--why he fixates on one dead child when he has just helped facilitate the murder of dozens of Jews in the showers of Auschwitz Birkenau. And that is just in the opening sequence of the film. He has been doing this for we don't know how many days. He is a sonderkommando, part of a work unit that, it seems, survive only as long as they are useful. They spend their day, or treat her, he spends his day directing other Jews into undressing rooms, into showers; he scrubs the floors of those showers and helps carry out bodies; he shovels ashes into a river; he stands by as his fellow Jews, his fellow humans, die. And, on the two days we see in the film, he finds his son among the dead and in addition to his jobs and a pending rebellion he tries to find a rabbi who will help him bury his son. And we are there, close to him, as these things happen.

This is not a film about the survivors of the holocaust. It is not an uplifting tale about a successful rebellion. This is a darker picture than that. It doesn't insist that we feel a particular way--in fact, the Wall Street Journal describes how neither Remes nor Rohrig wanted to make the audience cry because that was too simple, too obvious--but the limited viewpoint allows you little space but for devastation.