the end is built into the beginning

Synecdoche, New York begins with Caden's daughter singing, then an alarm clock--7:45--and on the radio, a literature professor reads from a translation of Rainer Maria Rilke's "Autumn Day (Herbsttag)" because, she says, Autumn is "seen as the beginning of the end." She compares the year to a life and September is a "melancholy month" in which "the bloom is off the Rose and things start to die." She reads the last few lines:

Whoever has no house now will never have one.
Whoever is alone will stay alone
Will sit, read, write long letters through the evening
And wander the boulevards
Up and down, restlessly
While the dry leaves are blowing

Not sure whose translation that one is, but here is Edward Snow's, with the earlier lines:

Lord: it is time. The summer was immense.
Lay your long shadows on the sundial,
And on the meadows let the winds go free.

Command the last fruits to be full;
give them just two more southern days,
Urge them on to completion and chase
the last sweetness into the heavy wine.

Who has no house now, will never build one.
Who is alone now, will long remain so,
will stay awake, read, write long letters
and will wander restlessly up and down
the tree-lined streets, when the leaves are drifting.

The film begins with an ending, or the indication that one is coming. Maria wonders if by flushing her poop, inexplicably green, she is killing something alive. Caden is injured and visits the doctor for the first of many times in this film. And then, we see his production of Death of a Salesman. Then in therapy, Adele admits that she has fantasized about Caden dying so she can start anew. Soon enough, of course, she will leave him, and his life will effectively end. The life he has for the rest of the film, producing and overproducing his impossibly large play--that is not, in any normal way, life.

The film is essentially the long death of Caden Cotard. 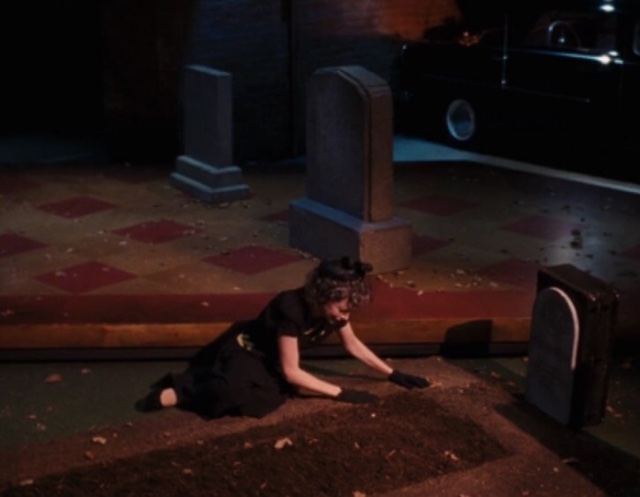 Take the film as a life and it circles back on itself. Caden loses his daughter when his wife leaves but then dies sitting beside the woman who has portrayed his/Ellen's mother in the play. He becomes/is the daughter before he dies. And, by a clock painted on a nearby wall, it is once again 7:45. With the alarm before Caden was born into a pained existence. (Like Phil Connors waking continuously at 6:00.) Now, with someone there by his side (and another in his ear) to take away his pain, he dies at the same time. His life is infinite and finite, timeless.

Before he sits down with his mother, Ellen speaks in his ear. She says:

What was once before you, an exciting and mysterious future, is now behind you, lived, understood, disappointing.

You realize you are not special. You she struggled into existence and are now slipping silently out of it.

This is everyone's experience. Every single one. The specifics hardly matter. Everyone is everyone. So, you are Adele, Hazel, Claire, Olive.

You are Ellen. All her meager sadnesses are yours. All her loneliness. The gray, straw-like hair. Her red, raw hands. It's yours. It is time for you to understand this.

As the people who adore you stop adoring you, as they die, as they move on, as you shed them, as you shed your beauty, your youth, as the world forgets you, as you recognize your transience, as you begin to lose your characteristics one by one, as you learn there is no one watching you, and there never was, you think only about driving. Not coming from anyplace, not arriving anyplace, just driving, counting off time.

He speaks to his mother, and just as he is (not for the first time) claiming that he has figured out how to do his play, Ellen gives one last instruction: