this is everyone's experience

Day 888. Eight eight eight. Like three infinities lined up next to one another. A good day to start in on another Charlie Kaufman film, one that deals in a fractal sort of reality, like that painting in Anomalisa. It also deals in depression and paranoia and hypochondria... But really, it deals in a universe where melancholy is the norm and walls burn incessantly and the colour of one's bowel movement is topic of everyday conversation.

Synecdoche, New York is the film.

Caden Cotard (Philip Seymour Hoffman)--whose name exists somewhere between the alter ego of a superhero and some sad recluse of a man who barley belongs to the same notion of humanity as the rest of us... Actually, he's a bit too close to the latter to really be the former.

Caden directs plays. In the first few minutes of the film, we see a production of Miller's Death of a Salesman and already we have a hint of what this is about. This is about death. In the opening sequence at home, Caden misread a headline about Harold Pinter and thought Pinter was dead, rather than getting an award. Death is everywhere in this film. First ten minutes, Caden has seen two doctors and called another. Now, Caden and his wife Adele Lack (Catherine Keener) are talking with a therapist (Hope Davis).

Backtrack a paragraph and I look up Cotard, because the Fregoli Hotel in Anomalisa was named for a delusion. A person suffering from a Cotard delusion imagines himself dead or nonexistent. Caden's condition is far beyond his body falling apart or him imagining his body falling apart. He doesn't know how to live. (Caden, by the way, means "battle.")

Hazel (Samantha Morton) is wary of investing in a house, at first because, you know, it's her first place by herself. But, of course, it's also on fire. And, the real estate lady's son is living in the basement. There's a sense in every detail in this film of... I guess it's entropy. That everything is falling apart, everything is failing. Caden reads the obituaries when he opens his morning paper, and he worries about having arthritis and is suffering from sycosis, and this is just another morning for him. Oh, and Adele wants to vacation without him. 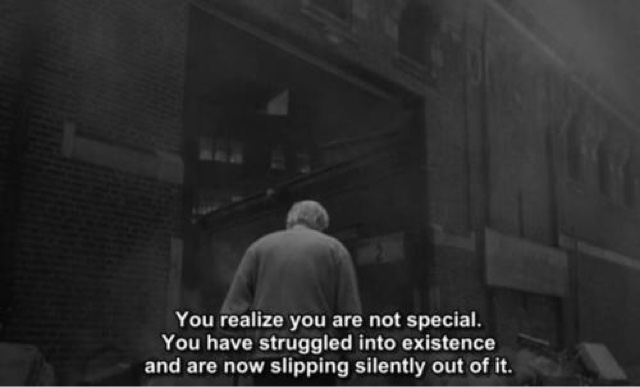 Then he loses track of time. Hazel says Adele has been gone for a year, he thinks it's been a week. Hazel's house is still on fire. In his play The Milk Train Doesn't Stop Here Anymore, Tennessee Williams writes:

We all live in a house on fire, no fire department to call; no way out, just the upstairs window to look out of while the fire burns the house down with us trapped, locked in it.

Caden explains to his cast and crew before he starts his big production:

I will be dying, and so will you, and so will everyone here. That's what I want to explore. We're all hurtling towards death, yet here we are for the moment, alive. Each of us knowing we're going to die, each of us secretly believing we won't.

This idea is integral, if not central, to everything Kaufman does. In Eternal Sunshine of the Spotless Mind, Joel and Clementine decide to get together again (and again) even though they know it will end badly, because now is what matters. In Anomalisa, Michael has nothing but now, and no matter how confusing his world is for him, now he can try to do something about it. (I've not watched other Kaufman films recently, but I mean to get to them this month. We shall see how this plays out.)

Time also gets... confused here. Caden doesn't notice how much time his daughter has been gone, but the diary she left behind continues into the present without her. Caden takes a brief phone call about his father dying and then tells a much longer version of what they told him about his father's final moments.

But, this is life, isn't it? The moments that matter expand and contract; and when we remember them, they are different than how they came in the first place. And each moment is immediate when you think of it. Like now is happening always.

Sammy as Caden (Tom Noonan) says a line and Claire as herself (Michelle Williams) responds to it as if the real Caden said it. He thought it, but didn't say it. But, the levels of reality blend together. Script becomes real becomes script, the set becomes actual building, actors becomes characters become actors and Synecdoche, New York becomes a mirror unto itself, pretentious to the point that the word becomes meaningless.

Ultimately, Caden (and Sammy) becomes God, a puppet master dictating an entire world within the world. Like God is walking around on the street telling people what to do.