we'll print that story when we get it

To think, I only managed yesterday to get through the first three paragraphs of Mary McNamara's Los Angeles Times piece--"Oscars 2016: It's time for Hollywood to stop defining great drama as white men battling adversity." And the first paragraph was just one line. 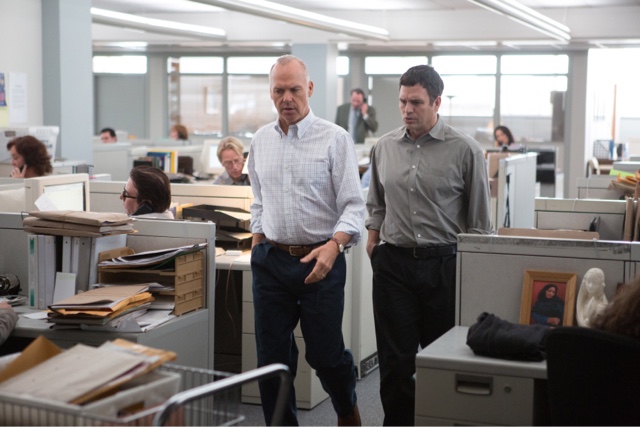 Meanwhile, I've got a screener of Spotlight playing right now. Immediately, I notice the music. Spotlight isn't nominated for Original Score. It is nominated for Best Picture, of course, which is why I'm watching it again this week. It's also nominated for Film Editing, Original Screenplay, Director Tom McCarthy, Supporting Actress Rachel McAdams and Supporting Actor Mark Ruffalo. I've seen a few people and at least one of the articles in this stack in front of me (but I'm not seeing which one at the moment) complain that Ruffalo just puts on an accent. I'm more impressed by his performance, I suppose. It feels like much more than just an accent. He's got a different demeanor, a bit of the awkwardness that Christian Bale puts into Michael Burry in The Big Short (but not as much), a nervousness about him that is palpable; his sentences are short, his movements abrupt. If one wasn't familiar with Ruffalo, I could see that it might not be that noticeable. But, that sort of subtle, but complete, transformation impresses me more than the more obvious beats of, say, Matt Damon in The Martian or Leonardo DiCaprio in The Revenant. The showier roles get more attention, of course.

McNamara says, "Though our demographics and attitudes continue to change, Hollywood's definition of great drama has remained stubbornly attached to standards and expectations set back when men were men (if they were white) and everyone else needed to just shut up and listen." This description troubles me. I will say up front, that the idea that we're stuck on stories about white men makes sense to me... Though, really, I think it is not deliberate exactly but more that the default is white. Everything else is secondary. But, McNamara throws in the "white" thing as a parenthetical, like it isn't her main point. I'm not that bothered by her main point, that we look to white stories before we look to black stories. But, reading this piece I have trouble with the idea that, separate from race, the stories are somehow the same. I already argued this yesterday, but when I've got a page of notes scribbled over McNamara's piece, I feel inclined to continue in this direction. Plus, as I mentioned yesterday, I'm arguing the race side of this throughout the day on Facebook. I want to get into why we (the Academy, rather) pick the Best Picture nominees we do, why certain films stick with us...

There are eight films nominated for Best Picture this year. Their box office (currently) is as follows:

That last number is a rounded off per week total, in millions of dollars. The obvious big ones there, the ones that have hit with a wider audience, are The Martian and The Revenant. Plenty of people in the past week have been vocal about the Oscars and I wonder with each person which of these movies they have actually seen, which of these films they care about. Another couple days and I will have seen all eight twice (Mad Max three times). I also saw Concussion, Straight Outta Compton, Creed, Beasts of No Nation, Chi-Raq, Tangerine--the oft mentioned films involving actors of colour. Plenty of other films as well. McNamara says the first four films there "fit the 'classic' definition of literary conflict. They just didn't fit, apparently, academy voters' ideas of a classic best picture." With the preferential voting system, they would literally have to be a voter's idea of the best picture, not just something they listed because it was worthy of a nomination.

At one point in her piece, McNamara steps away from the race thing entirely and writes:

Obviously, plenty of films have challenged this sensibility, telling a wide variety of stories from many points of view. But when it comes to Oscar bait, the default remains too often set at literally reading of the four essential categories of conflict: Man versus man, man versus nature, man versus society and man versus himself.. As many have already pointed out, the characters in the lead actor category were a writer [Trumbo], scientist/astronaut [The Martian], tracker [The Revenant], inventor [Steve Jobs] and artist [The Danish Girl]. The characters in lead actress? Homemaker [Carol], mother/rape survivor [Room], inventor [Joy], wife [45 Years], clerk [Brooklyn].

As for McNamara's characterizations of the characters in the lead categories... Dalton Trumbo (Bryan Cranston) is not just a writer; in fact, his role as husband and father is integral to the emotional core of the story. Mark Watney (Matt Damon) is a scientist (botanist, specifically) and an astronaut. Hugh Glass (Leonardo DiCaprio) is more than just a trackerl the film begins with him with his wife and son and it is his son's murder more than himself being left behind that drives him. A big part of Steve Jobs deals with Jobs' (Michael Fassbender) relationship with his illegitimate daughter. And, the implication here that artist is, I don't know, some stereotypical, and stereotypically masculine, film character in some... inappropriate way--I don't even know how to respond to that. But, bigger than Einar Wegener's (Eddie Redmayne) occupation is the idea that he is, you know, a woman. As for the lead actress nominees, I had to double checked my list to remember what McNamara meant by homemaker. I saw Carol and didn't really think of Carol Aird (Cate Blanchett) as a "homemaker." That makes her sound like some stereotypical housewife, at home all the time, taking care of her kids. But, in context of the that film, she is, yes, a wife. But, I can't even remember if we even see her husband. Carol is a love story, and Blanchett's predatory character is the title character, it is Therese Belivet (Mara Rooney) that meant the most to me. Rooney is nominated for Supporting Actress. Then there's Ma (Brie Larson) in Room; yes, she is a mother and she has been held captive and raped on a regular basis. McNamara seems to be--but is not explicit about it--drawing some division between stereotypically male roles and stereotypically female roles while also suggesting that they are all fitting with those very limiting "essential categories" of characters. I don't know what it is that she wants outside of that. But, to continue, Joy Mangano (Jennifer Lawrence) is, as McNamara identifies her (which seems to contradict her point) an inventor. She is also a mother, a daughter and a wife. Kate Mercer (Charlotte Rampling) is a wife, but 45 Years is a very small-scale story about an old married couple; Kate and her husband (Tom Courtenay) are probably 90% of what's on screen. What else would she be?Hell, the problem here is not that Rampling was nominated for playing a wife but that Courtenay was not nominated for playing a husband. Finally, Eilis Lacey (Saoirse Ronan) is a clerk because that is one of the few jobs she could have in 1952 New York. In fact, that she has this job (a job Therese Belivet in Carol has as well) is actually a progressive part of the story because of its setting. But Brooklyn is not about Eilis as a clerk. It is a romantic story. Like 45 Years or Carol, this is a film that requires a small scale...

And, maybe my point is not clear there. But, I think that is because McNamara's point is not clear, either. She further explains: "Film is not the only narrative art struggling with a limited notion of excellence." But, she herself has just explained how a writer, an astronaut, a tracker, two inventors, an artist, a homemaker, a mother, a wife, a clerk, the rappers in Straight Outta Compton, the boxer in Creed, the doctor in Concussion and--and here is where it gets even more problematic--a boy soldier in Beasts of No Nation are all quite different representations of what she calls excellence. (The problematic thing with Beasts of No Nation, by the way, is that the role that arguably deserved a nomination is not the protagonist at all but the Commandant (Idris Elba), the villain.) In trying to argue that stories are limited, McNamara includes 14 different films with 14 different ideas of conflict and success. This is, according to here, exemplary of "film's increasingly narrow focus." But, we had films about writers and scientists and trackers and inventors and artists and homemakers and mothers and fathers and husbands and wives and boxers and doctors and warlords, and even clerks before. And we will again. Film is still quite a wide field with a whole lot of variety.