all of our lives are tied up with each of us

One of my family's videotapes when I was a kid, often watched and rewatched, had Footloose, Romancing the Stone and Splash. But, it's been a while. 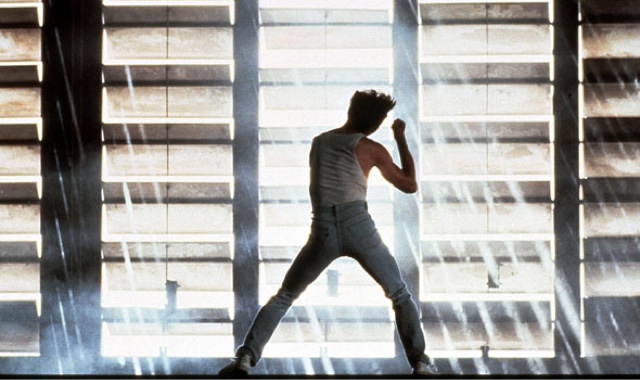 There was a serious paragraph about religion I had going already before I pushed play on Footloose and then the song started and there's close ups on feet dancing and I just don't feel like ranting.

Then, Reverend Moore (John Lithgow) starts talking and I'm tempted to rant all over again. Except he's a pretty good preacher. He gets into it. Hits the podium and everything. And, I really like that the film starts with him before we get to really meet Ren (Kevin Bacon) or Ariel (Lori Singer). We even get dialogue from Vi Moore (Dianne Wiest, who we just saw in Snecdoche, New York recently) before Ren's mother (Frances Lee McCain) or Ren get to speak.

(The role of Vi Moore, by the way, is played in the recent remake by none other than Groundhog Day's Andie MacDowell.)

Then, we go off with Ariel and her friends, and some guy--Chuck (Jim Youngs), Ariel's boyfriend, apparently--who seriously (and apparently not ironically) has antlers on his truck. Ariel, preacher's daughter, is a daredevil. It's a cliche but we like it.

Nice bit of editing as the semi truck approaches, too.

Only then do we get to really meet the McCormacks (Ren and his mother). Ren's introduction by dialogue is about Slaughterhouse Five, calling it a great book. The locals freeze like deers in headlights. Tom Sawyer is a classic. Slaughterhouse Five is anathema.

Meanwhile, Ariel’s got a smuggled cassette of rock and roll music and all the youths at the local diner get to dancing until the Reverend cuts it off. And, John Lithgow is great here, too. He doesn't rage, doesn't even call her out on it. He just walks away.

And I find myself turning in my head to The Tempest. Ariel, the spirt that saved Prospero from Sycorax. (Also, from the Bible--means "lion of god.")

(Nice screenwriting 101 bit--it's about the 18-minute mark that Ren learns that dancing is illegal. And, we're off.)

Does that make Ren into this film's Caliban? And the Reverend is Prospero?

It has been a while since I've listened to the soundtrack to this movie. It's a good bit of 80s music, and “Holding Out for a Hero” (playing during Ren's chicken contest with Chuck) just got me thinking about the TV show Cover Up--same year as this movie, I realize--and I'm thinking about tangents. Not just that I got off on a tangent in my head there, got reminded of the death of Jon-Erik Hexum while Ren's trying to prove his small-town cred, or that Sarah Jessica Parker's Rusty reminds me of her character from the TV show Square Pegs, done the year before this film came out. I'm thinking about the way a) I tend toward tangents and--

(Flashbacks barely more than half an hour into the film seem a bit much, but the rest of the dance is amazing stuff.)

And then Ren's parallel bars bit made me think of American Anthem two years later. (Ren is a gymnast.) That's how my brain processes all these movies. Compare and contrast and drift in and out of one movie or another and back again. I wrote about these sort of tangents in a paper last week.

Ariel shows Ren the "Yearbook" (a bunch of quotations from books and songs and original poetry that she and others have written on the walls of an old train engine) and it occurs to me, maybe Ren is Prospero and the Reverend is Sycorax. Ariel tempts Ren with poetry (except he read these particular lines by chance):

Then she risks her life again--this time in front of a train instead of a semi truck--and you just know that Ren is smitten if he wasn't already.

Willard's (Chris Penn) inability to dance at the country western bar is a great bit of characterization and exploration of theme--like he literally cannot express himself as a person because he cannot dance. I'd forgotten how much this movie is about so many other people than just Ren. Willard and Rusty. The reverend and his wife. Ariel.

I remember this movie as a fun little 80s romp with good music and dancing, plus a little bit of religion. It holds up well as something more than that. The reverend's final sermon says it well, and maybe it's because I'm a parent now, I think it means something more. You make mistakes, but as long as your intentions are good, maybe the mistakes don't matter so much in the long run.