the last battle of the american revolution

Stephen Spielberg knows how to start a film. From the storming of the beach in Saving Private Ryan to the revolt here in Amistad, he can pull you in.

I've said in this blog before that I don't like to deal in "snubs" when talking about Oscars, but damn it, looking at the nominees that year, I can barely fathom how Djimon Hounsou was not nominated. In fact, you've got a bit of the #OscarsSoWhite problem. For this movie, very much about the experience of its black characters, the acting nominations (at the Oscars, anyway*) are limited to Anthony Hopkins.

(* Hounsou was nominated for a Golden Globe.)

Also in the supporting category, you've got Robert Forster, white guy, nominated for Jackie Brown, a film led by black actors. Of course, a) Anthony Hopkins is amazing in this movie and b) a nomination for Director or Best Picture wouldn't have mattered in the year of Titanic.

I think there's a familiarity to it. Not just a racial thing, though it gets at that as well. Anthony Hopkins, we know him. We've seen him in many films. We've nominated him before. This was Hounsou's first film and he doesn't even perform in English.

Then again, why are they more familiar with the white guy? Leave Hounsou out of it for a moment. Take Morgan Freeman, instead. He's got a less showy role than Hopkins but (probably) more screen time. Same with Chiwetel Ejiofor. They've got their moments here, nothing as big as Hopkins' 7-page monologue, but they've got their moments.

But we like the show. We like the familiar. Bonus: this film has the white characters saving the black ones. It would take another couple decades before we would (or will) get a movie about, say, Nat Turner. Birth of a Nation, which was big at Sundance last month, is about Nat Turner. 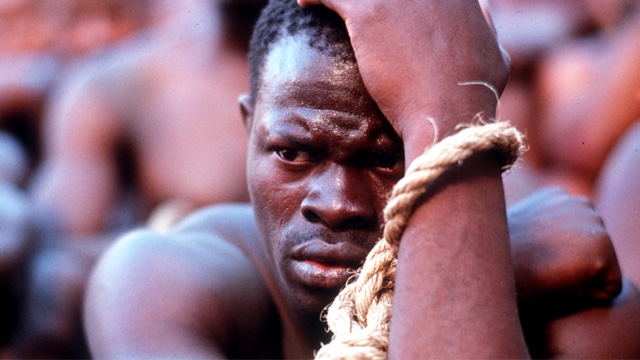 I'm trying to find the right way to phrase this. I've already spent thousands of words on #OscarsSoWhite in this blog. I think it should be clear that I think the Academy has and has had a problem when it comes to race. And a big part of that comes from Hollywood having an even bigger problem when it comes to race. And, that comes from an even bigger problem in the nation at large. In the fictionalized version of John Quincy Adams' speech before the Supreme Court--

(While his monologue here is seven pages long, in reality, Adams spoke for seven hours over the course of two days.)

--he's got the line I used as today's title. The way I see it, though, maybe we still haven't fully fought that battle. When a Super Bowl halftime show can have people up in arms, we cannot claim that we have, as some unfortunately dim people suggest, moved beyond racism. The latest thing going around--that we were doing just fine until Obama came along and divided us--angers me. I mean, we are so shortsighted that we forget riots and protests and murders going back year after year, decade after decade, that we forget images of dogs and firehouses, let alone the reality thereof.