what a lovely ballet ensues, so full of form and colour

I forget to begin as The Fifth Element involves the ancient from 1914 Egypt. We'll jump the the future soon.

First, some adorable aliens? cyborgs? robots? (They're not German.) Tiny little heads, giant bodies, and they waddle like penguins.

And the madness of The Fifth Element begins. It should be no surprise that so much of this film was in the director's head when he was young. This is like every kid's crazy version of science fiction and fantasy writ large. You've got absolute evil. You've got monsters. You've got a brave hero, a beautiful heroine, comic relief. You've got fantastic visuals and profound concepts shoved into tiny, easy-to-understand boxes. You've got black goo that come out of folk's foreheads when the big evil... thing approaches. Hell, you've even got (briefly) Luke Perry.

Even, ridiculous weakness is such a cliche. This thing needs to adapt to our living conditions in order to... destroy us? And the absolutism. Life turns to death, light to dark, forever. Scary stuff. Forever, really, don't mean shit. I think I shared (at least) once in this blog my own story in which the villain has this jewel that will destroy all of reality and the hero is like, go ahead. Won't matter anyway, once you do it. Plus, you know, how can you be sure it works? It cannot have been tested. But, screw logic when you've got the fun of priests and soldiers and aliens and a hapless taxi driver all getting pulled into action that will save the universe as we know it. 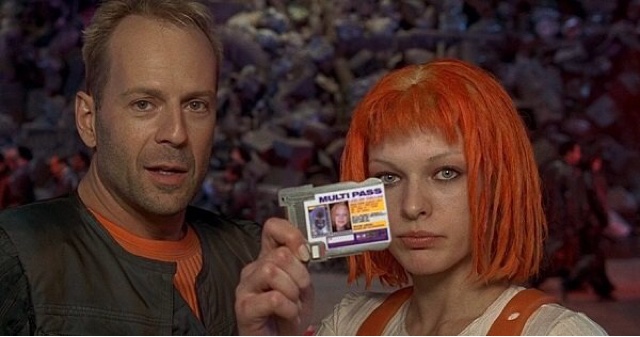 Then I forget to continue as Leeloo (Milla Jovovich) meets Corbin Dallas (Bruce Willis) and the plot really gets going. Future city, flying cars, and the world building is not dumped into dialogue. It just is.

Zorg (Gary Oldman) is such a strange character, but Oldman embodies it well. And that little creature inside his desk is adorable. 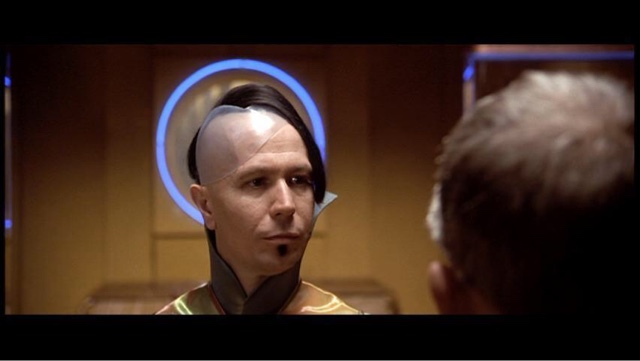 Speaking of Zorg, he's surrounded by circles. Dallas, on the other hand, is surrounded by squares and rectangles. I must admit I didn't discover this myself, but I have been noticing it, especially the circle thing around Zorg. Circular Windows, circular lights, even circular hallways. Dallas' apartment is all boxes in boxes... The circle/square thing reminds me of another madness that I love--Sam Kieth's comic Zero Girl. Main Characgter's feet leaked liquid when she felt bad, but that's (obviously) not the connection. Circular things had a tendency o to be good for her, helped her. Squares were the opposite; they tended to hurt her. The thing is, I'm watching this, and the police--whov'e got big circular lights on their uniforms, made Dallas (and the guy they thought was Dallas) put his hands in two circles on the wall. The circles are like foreign objects in Dallas' home. Leeloo's ornage suspenders have circles cut out of them. Zorg's surrounded by circles. And, the thing that's going to destroy the universe--it's a bit spherical. Circles are, at the same time, elements of disorder and chaos (for Dallas, anyway) and links to things ancient. Like the circle is the more natural form, the square unnatural. Or maybe I'm just going off on meaningless tangents, but that is the madness sometimes. Give me a film that embraces it's strange and still offers a strong set of characters with a clear cut plot, and that's leagues above some of the shallow cookie-cutter bullshit Hollywood spews out sometimes.

And, there's a flaw in that whole tangent, anyway, because the elemental stones are square.... Or maybe that's the philosophy of the film--love is more natural (or more powerful) than earth, air, fire or water.

A little cheese and madness. Is that too much to ask of a fantasy film? 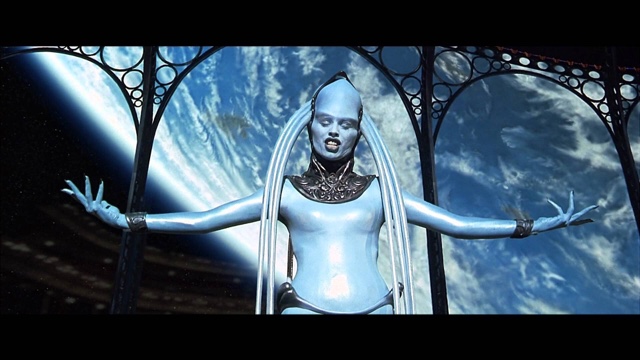