an amusing anecdote about a drug deal

Quentin Tarantino's schtick doesn't work for me as it used to. He can still put together a good scene but he's got a self-indulgent streak that... watching Reservoir Dogs right now, I realize was always there. Hell, he even gives himself the self-indulgent dialogue in the opening conversation scene. Also gives a bit to Chris Penn. And of course Steve Buscemi. I do like that we start the film with like 7 minutes of dialogue that has pretty much nothing to do with the plot. (There's surely a bit of character setup in the conversation, but it's not as if the film would be broken without this intro. (In fact, the first time I saw the film--in the campus movie theater at USC--I walked into a screening late and missed the opening bit.) Unlike fictional Robert McKee from Adaptation. last week, I think movies are perfectly fine if they spend time outside the plot here and there.

Plus, here, the abrupt change (through the opening credits) from cool conversation and overwrought walking to Mr. Orange (Tim Roth) screaming in pain is a great cut. (A smash cut straight from conversation into such a thing would be even more impressive, but a film needs its opening titles.) 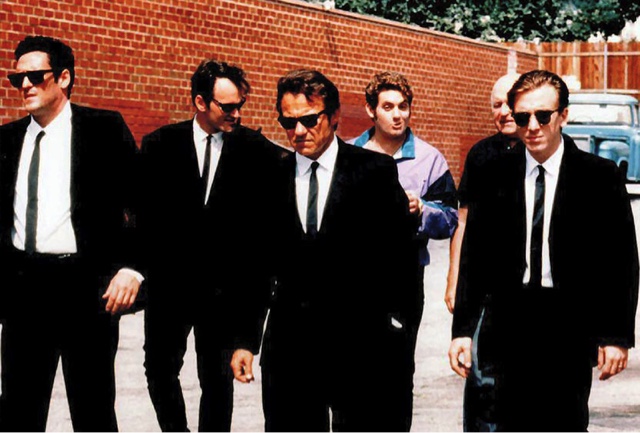 Despite that "schtick" line above, this movie does pull me in. One location (mostly), dialogue driven, and it's got energy that many films cannot manage with a lot more action. Tarantino can pull out of a single location a lot of tension and drama. In any single instance, it's amazing, but it gets a little repetitive. (And his latest, The Hateful Eight is basically this blown up into an entire film, much like this, his first film.) Plus, whether it's him letting his actors go all in or if it is just inherent in the scripting--honestly, I have never read one of his scripts, so I'm not sure--he can make an ensemble really feel like a group of individuals... Most of the time. The dialogue blends together here and there, a bunch of hardboiled yelling with a lot of profanity. But, there are always moments in which these do feel like separate people with their own interior lives.

The commode story sequence is some amazing stuff. Roth really sells the changes over time.

And then, here I am again, just watching away, forgetting to write anything of note. You'll have to forgive me. I saw the Oscar-nominated short films this evening, so technically, this is the sixth film I've seen in the past 8 hours. Not my best record, but it's late, I'm tired, and everybody just died.