write what you want

Almost Famous was nominated for four Oscars (Kate Hudson for Lead Actress, Frances McDormand for Supporting Actress, Joe Hutshing and Saar Klein for Editing) and won one (Cameron Crowe for Original Screenplay). It is unfortunate that a film so very much about music could not be nominated for its music. (For example, at this moment, Anita (Zooey Deschanel) is leaving home to become a stewardess and "America" by Simon and Garfunkel is playing. "I've come to look for America" indeed.) She leaves her little brother William a stack of vinyl albums. Their mother (McDormand) does not allow them to listen to Rock and Roll.

Cut to 15-year old William (Patrick Fugit) watching his music critic hero Lester Bangs (Philip Seymour Hoffman) on the radio. William wants to write about music. He already writes about music or his school paper. Lester offers him $35 for 1000 words on Black Sabbath. And, honestly, I'm a little jealous. I know this is fiction but the official line is that this is Cameron Crowe's autobiography with the serial number filed off. This is Day 921 of this blog--and I am a teacher and intend to keep being one--and I wish someone would give me some money to write about movies... Or music, for that matter. Or anything. (Plus, I've got my movie critic her or, in Roger Ebert, who called this movie "fun and touching in so many different ways.")

(Seriously, pay me money, I will write for you. As long as it's, you know, ethical. I ain't writing school papers for anybody.)

The music in this film distracts me.

(Not without some serious cash, anyway.)

Even Stillwater's music. I like movies about music sometimes even more than I like music. It's like a distillation of what it means to be creative, and I pride myself on being creative.

I love this exchange:

Penny (Hudson): Call me if you need a rescue. We live in the same city.

William: I think I live in a different world.

There is something about either Hudson's performance or the writing or the direction that just absolutely frames her as something exquisite, something worth pursuing, worth having. That William is enamored makes total sense. Going into this film back in 2000, I would have been more interested in (or knowledgable of, at least) Anna Paquin (after all, she had been nominated for an Oscar already) or Fairuza Balk. Really, I was in the theater because of Cameron Crowe. Say Anything was already one of my favorite films.

William snagging the t-shirt is a great moment.

And, of course, the "Tiny Dancer" scene. Punctum, to be sure.

When Cameron Crowe is on, he is on.

Like the mother's student writing down "Rock Stars have kidnapped my son." That is weirdly brilliant. 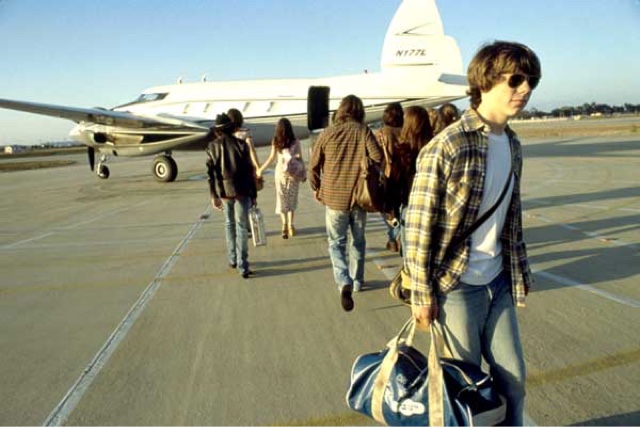 And therein there was that time when I got so stuck watching the movie (again) that I stopped writing before the blog should have been done...

Except, I would actually be better off with shorter entries.. Tristan Louis at TNL.net suggests shorter entries means more eyes. I can't find that source in its original form anymore, but Auerbach (2005) adds to this "the brutally short horizon for content" in blogs. Certain entries of mine--and I should write a piece about that sometime--get new views all the time. Other entires seem to never get any love. Some new entries get almost no views. It's all hit or miss.

What we can do, though, is just write. One of my fellow TAs asked me tonight what you need to do to be a prolific writer. My answer was simple: write. Or draw. Or paint. Or dance. Or act. Or what the fuck ever. Just do it and do it and do it and eventually if not already you will do it well.