can’t tell these young whippersnappers anything

(Two things before I get going today: 1) it appears that, sometime since I last checked ahead for availability, For Your Eyes Only has become unavailable online as it was before; only way to get it is to buy it, and I don't feel like paying that much right now. 2) I have actually written about For Your Eyes Only in this blog once before, last May when Roger Moore died, so if I don't find it cheaper, maybe I'll just skip past it. There will be at least one more James Bond movie coming up on this deconstruction, anyway.)

The Fox and the Hound might actually be built up in my head as a fixture of my childhood more than it ever actually was one. I loved it when I saw it in the theater. At some point, we bought the home video, but I think there might have actually been a few years in between. In the meantime, though, this movie was in my head.

Nice cartoon staples right away, with Dinky and Boomer trying to catch Squeeks like it's something they would do every episode if this were Merry Melodies or Tom and Jerry. 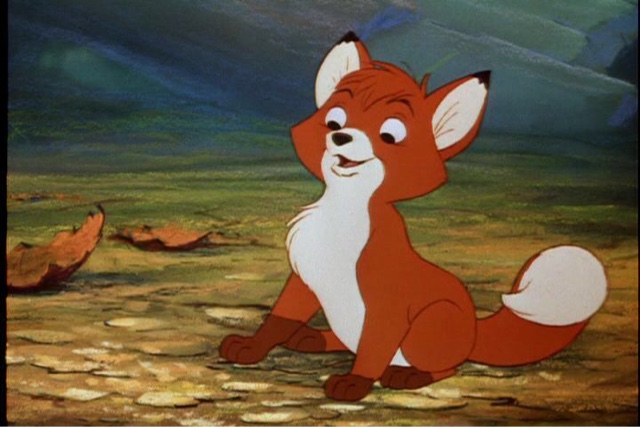 So, I looked it up and learned, after all these many years, that "Tod" is a British Isles name for a fox, apparently linked to a measurement of wool or a bushy clump of ivy, I guess because foxes are bushy.

I also learned--totally separate thing, not as life-changing--while double checking the trivia section on IMDb (and yes, Tod comes from Middle English todde for fox, according to the trivia) that this was the last Disney animated film to have all its credits at the beginning. (It has been nice watching all these old movies that have no end credits or very short end credits. I mean, it's nice that all the crew folk get their name on things, but when you are obsessive like me, sometimes you're sitting in the theater for an extra ten minutes or more.

But, back to the Tod thing.

We owned this VHS proper, not some copy off of cable. There was an official description on the back. It's got to say the names Copper and Tod. And, I swear I had at least one version of this story in book form. And, I knew how to read well before this movie was out.

And, then the Internet takes me down an interesting path. I mean, not that I believe that there is any alternate reality truth to Mandela Effect stuff, that people remember things differently is inherently interesting. So, after checking the IMDb trivia, I google The Fox and the Hound and Mandela Effect, and find my way to a Reddit thread in which none other than Keith Coogan (i.e. the voice of young Tod) jumps in to talk about the film, how some people remember character deaths that didn't happen, and he lists off a bunch of Mandela Effect stuff he "believes".

And, having seen the way filmmakers updated (mostly pointlessly) Ferdinand for a new animated film, I can imagine a new version of this story, with a little more focus on Amos Slade and the Widow Tweed, and the friendship between Tod and Copper actually fuels a relationship between Slade and Tweed and everyone lives happily ever after.

Except, that would be cheap. Bad enough, they let Chief live (though the Mandela Effect thing that came up with this movie is just how many people remember Chief dying) rather than die like he did in the book. We need this story as it is--all about racial/social division, about the urge to commit violence against the Other.

Stuff I never got from the film as a kid. Not explicitly anyway. But, it was in there.

I figure a whole lot of me came from this film, actually. More on that tomorrow.