gonna do what he’s been told

Foxes and hounds are both canids. They can even be interbred. I read a thing about some Russian scientist purposely doing so, and others have continued his research for decades. But, The Fox and the Hound presents their difference as something bigger. On TV Tropes' page for the film, under the link for Have You Tried Not Being a Monster?, there is a good description of what this film is doing:

The original story was an allegory for racism separating two friends. The film is sometimes interpreted as depicting an innocent summer romance between two boys torn asunder by divergent career paths and the folly of machismo. Sometimes it is seen as showing how men repress their feelings as they come of age, and lose touch with their innocence.

I don't know who actually wrote that, or how the TV Tropes staff works, but the description seems quite valid in all parts. (The original novel, by the way, is far more dark; Chief is killed by the train, Tod is killed (after having both of his mates and several of his children die) and Copper is shot to death by his owner when the guy retires to a nursing home.) The obvious allegory here is the race thing. Additionally (and relatedly) the film is all about how society forces us into specific roles in life, and bucking that system can lead to tragedy. Roger Ebert calls it "a rather thoughtful meditation on how society determines our behavior."

And, most notably, the echo of those lines about being friends forever at the end suggest a melancholic ending; even though Copper stood between Amos and Tod, the film implies that the titular duo can still never really be friends again.

Except, the film undermines this by having Amos on the Widow Tweed's porch at the end. If she can take care of the guy who shot at her car (and at her), surely, Copper and Tod can be friends again. Or so one might imagine. So five-year-old me might have imagined.

And, further fuel for this same thing comes from Dinky and Boomer, from Squeeks and Big Mama. Dinky is a sparrow, Boomer a woodpecker, but they are clearly friends. Tod might as well be a meal for Big Mama, but she saves him instead. Squeeks might as well be a snack for Big Mama but she never tries to eat him.

To be fair, it hardly seems like Dinky and Boomer are really trying to eat Squeeks--surely, they must have other food or they would starve. Rather, it feels more personal (and it is played for laughs, anyway. But then, so is most of Amos' shooting.). But, their urge to catch Squeeks and kill him, whether or not they want to eat him, ties into the themes about race (species/genus/whatever) and society forcing us into uses and thems. Squeeks is their enemy just like all those foxes are Amos' (and, by extension, Chief's and Copper's. Copper wanders off and plays with Tod and he is tied up, forced to be the domesticated dog he's supposed to be. And for Tod the opposite. He is too much trouble in the domestic arena, so Widow Tweed has to set him loose on the animal preserve (after first trying to keep him cooped up indoors and even giving him a collar). (It's like both Call of the Wild and White Fang are happening at the same time, and the two animals just happened to meet half way for a little play time.)

When Amos takes Chief and Cooper on the extended hunting trip, note how Chief says Copper cannot sit in the front seat; he has to earn that place. Like the difference between the house slave and the field slave. Chief behaves. He gets certain privileges. Copper has been misbehaving. He doesn't. Tod is more like a free man who wanders into the plantation and that is the danger. He's the call of the wild for Copper, when his own salvation by the hands of Big Mama and Widow Tweed means Tod is being called to civilization, domestication. They meet when they are young and they play. They meet again, and they have moved farther into their respective roles. They fight. 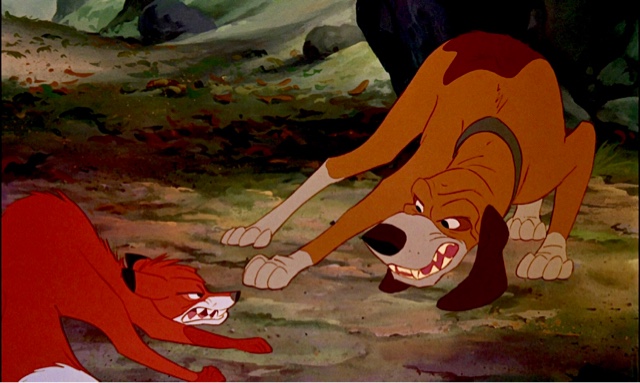 The thing is, watching this film now, it feels inevitable that Tod and Copper be torn apart. Not just because I know the film and have known the film for so long, but also because what other story is there here? This is a tale of star crossed friends. So similar from an outside perspective--again, they are both canids--but pushed by forces beyond their control to be different. This is the story. This is a classic plotline.

But, as a kid, I think it was even more tragic because how could best friends forever turn into enemies? How could they not be friends again later after Copper saves Tod's life? Plus, so much of this film (and so many other animal-centric Disney cartoons) is about different animals getting along (or not) just like people do. And, what did five-year-old me know about real problems between people? White kid, living in the suburbs, attending private school. I didn't know much. But, I think this film (and others like it) taught me about different folks getting along more than they taught me about different folks fighting. Man, the outsider to this story or--the other one that comes immediately to mind--Bambi, is the primary antagonist. Without Man, the animals would be fine together (nevermind their natural inclinations to eat one another).

Blow that up into the real world, add a decade, then another, then another, and it's mostly the same. Without The Man, people would generally be okay. Without all the big rules of civilization and society, without privileged Men holding public office and dictating our lives--and without more subversive social programming that doesn't really come from above--we might all get along. But, it's too late for anarchy without a whole lot of destruction. So, instead, I side with the notion that people who have privilege, people who have power, can at least do what they can to help the people without. Save the helpless fox from dying, let the brand new butterfly spread its wings and fly. And, find amusement at the grumpy old badger, because he is too old to be better.