do i hear happiness in here?

I've seen Annie live a couple times, for a History of Popular Culture class I read a bunch of old Annie comics... (Though I swear I didn't end up using any of those for the resulting paper. I wrote about some other comic that I had never heard of before that--Bringing Up Father.) I saw the 2014 film version. (But not the 1999 one.) And, I have seen the 1982 film version of Annie more times than I can remember.

And, a warning, if you don't like musicals, I've got three on my list for 1982. In fact, it might be very easy to establish up front what I got from 1982 films on repeat in my home--I got a love of musicals. Just last week, my daughter and I saw the new production of Disney's Aladdin at the Pantages. And, we're thinking of getting some of the rush tickets for the Pasadena Playhouse's production of The Pirates of Penzance.

The film (and any stage production) is just the origin part of the Annie story, rounded out into a self-contained thing. The old comic got into a lot more satire and politics (notably, Harold Gray's comic strip would not have presented Roosevelt so nicely)-- 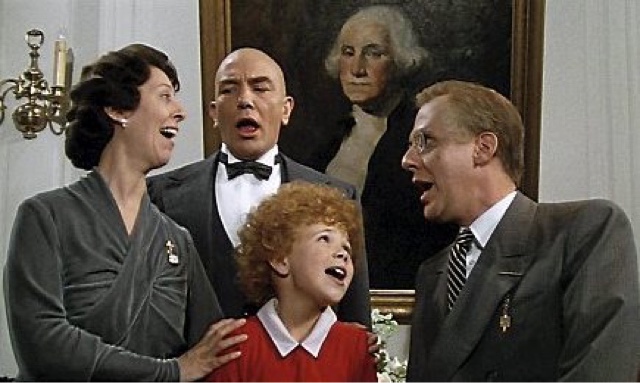 --weird spy stories, and adventure tales. Bigger-than-life stuff that the film only really aims for in the third act when Rooster tries to kill Annie.

Of course, being a musical, everything is bigger than life. Cleaning floors (miserably) even becomes a fun song-and-dance number. And, that is what is great about musicals in general. Songs make the mundane more interesting, songs can convey powerful emotions simply, and can also make the outlandish (though there isn't much that's outlandish here but for Punjab's (who isn't normally in the musical but comes from the comic) magic) feel just as real as everything else.

Plus, in this case, the casually racist stuff is accompanied by a nice musical cue. (Also, while Punjab has actual things to do and lines to say, the Asp (also not usually in the musical but from the original comic) doesn't even have any lines.)

I had considered lingering on On Golden Pond for a few extra days, so I had not put much thought into what I might say about Annie. I will have more tomorrow.