running back here to you

But nevermind the personal rambling. I am sure there will be more later. For now, what about the movie?

Vincent Canby, writing for the New York Times, calls the original Broadway play "processed American cheese, smooth, infinitely spreadable and bland, with color added by the actors. The screen version... Is not much different in any superficial way." I immediately think of Homer Simpson sitting up all night eating an entire package of American cheese, not because it is particularly delicious but because it just so damn edible. Canby's choice of "smooth" is a good descriptor.

To be fair, Canby suggests that the film's cast "add more than color to this pasteurized product. 'On Golden Pond' now has the bite of a good old cheddar." It's not like Canby dislikes the film. Leave that to David Kehr, writing for the Chicago Reader, who calls the film "the cinematic equivalent of shrink-wrapping, in which all of the ideas, feelings, characters, and images are neatly separated and hermetically sealed to prevent spoilage, abrasion, or any contact with the natural world. ... The film exudes complacency and self-congratulation; it is a very cowardly, craven piece of ersatz art."

I'm somewhere closer to my old standby reviewer, Roger Ebert, who calls the film "a treasure for many reasons, but the best one, I think, is that I could believe it." And, he opens his review, as he often does, with a wonderful breakdown of what makes the film so good. He writes:

Simple affection is so rare in the movies. Shyness and resentment are also seldom seen. Love is much talked-about, but how often do we really believe that the characters are in love and not simply in a pleasant state of lust and like? Fragile emotions are hard to portray in a movie, and the movies that reach for them are more daring, really, than movies that bludgeon us with things like anger and revenge, which are easy to portray. 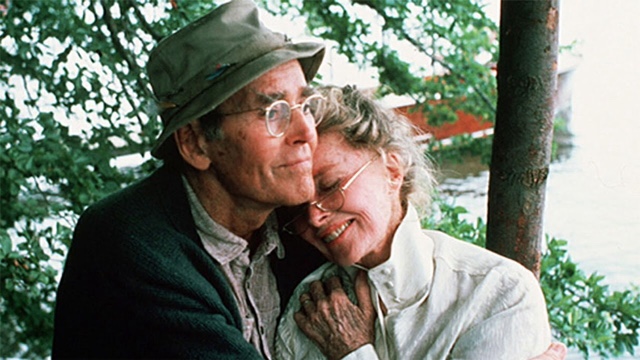 For me, this film lives and dies with Norman and Ethel. Henry Fonda and Katharine Hepburn had never worked together, and purportedly had never even met before this film. Fonda started in the theater in 1925, his first screen role was in in 1935. Hepburn started in the theater back in 1928, and her first screen role was in 1932. But, they apparently had never crossed paths. But, every scene with the two of them feels like--in cinematic terms--they had starred in a few film noir detective films back in the 30s, a few screwball comedies in the 40s, and had been looking to work together again but just hadn't found the material for the intervening decades. They feel like two people who have actually spent 50 years circling each other, bantering with each other. Chalk that up to two Hollywood greats who could act circles around so many other stars, even at the tail end of their lives--Fonda would be too sick to attend and accept his Oscar for Best Actor in March, and he would die in August 1982; On Golden Pond was his final film. Hepburn, with a noticeable tremor that keep her head shaking, had backed away from film, reportedly telling an interviewer, "I've had my day--let the kids scramble and sweat it out." But, this story, which embraces old age, brought her again to the screen. She would do some television work and her final appearance on the big screen was Love Affair in 1994. She would die in 2003.

It's a good half hour into the film that Chelsea (Jane Fonda) arrives (along with Dabney Coleman as her Dentist boyfriend Bill, and Doug McKeon as his son, Billy.) I said yesterday that I didn't remember from the last time I watched this film (which was a long time ago) what the plot was. Really, it barely has anything that could be called a plot. There's a little bit a of a plot line with Norman and Billy fishing and getting so into catching the local legend, a large trout that Norman calls Walter, but a lot of the progression of that plot happens offscreen or in montage. It is clear from the way Jane plays some of her looks at her (real-life and on-screen) father, that there is something wrong there; that their relationship has some trouble to it. But, some of their troubled relationship is only clear on repeat viewing; he asks what kind of car she and Bill rented and she doesn't know; he presses her but she can only say that the car is green and ugly and breaks down a lot. A few minutes later, when Norman is talking to Bill, he asks if Billy has read Treasure Island and on repeat viewing one might wonder if Chelsea ever read it when she was young. (Later, Norman will give it to Billy and tell him to go read it.) And, Bill tells Norman, "Chelsea told me all about how you like to have a. Good time messing with people's heads" as Norman is being particularly difficult answering the question as to whether he (Bill) and Chelsea will be allowed to sleep together while at the cabin. (They are unmarried, so Bill has to ask.)

But, the overt disconnection between Chelsea and her father comes abruptly when Bill and Norman are playing Parcheesi. Bill tells Chelsea he's a "Parcheesi pro" when Norman only just taught him to play. Chelsea sits off by herself away from the other four.

Chelsea: I tend to panic when the competition gets too intense.

Norman: What's that supposed to mean?

Chelsea: What I'd like to know is why you [Norman] playing games. You seem to like beating people. I wonder why.

There is something there. But, the film (and presumably the play) makes us do the work for it. This is 55 minutes into the movie. And, Chelsea is about to be absent for most of the rest of the film. the next day, Chelsea mopes in the gazebo by the lake. "I don't think I've ever grown up on Golden Pond," she tells her mother. In Los Angeles, she feels in charge; back here, she feels like a "little fat girl" and she calls her father a "God damn bastard" and says she's still answering to him, but there is no detail to any of it.

And, honestly, if not for an IMDb trivia note--

that Jane and Henry had a relationship similar to Chelsea and Norman, and there's one take--in the film--where Norman covers his face after Chelsea grabs his hand because Henry Fonda started to cry, "embarrassed by his tears"

--I would argue that this film would be better off without the troubled relationship between Chelsea and Norman. Keep it simple: Chelsea and Bill leave Billy at the cabin for a month while they go to Europe, and leave more screentime for Norman and Billy. The strain and the joy in their interactions make the third act work, with Hepburn showing up now and then to make it even better.

But, it's not necessarily that the film would be better off without the troubled Chelsea-Norman dynamic. Rather, it would be better off with more of it. The film is 109 minutes and it could actually use more conversation, more dialogue to explore these relationships. There is more depth (and more screentime) in the interaction between Bill and Norman in that sex talk than there ever really is between Norman and Chelsea. Well, I guess there's depth there, between Norman and Chelsea, but... To offer up a strained metaphor, it's like a really fucking deep pond that is only a pond across. The movie doesn't give it enough time. And, as it is, it distracts from the deeper stories here--Norman's aging and his forgetfulness, Norman and Ethel's lovely marriage after five decades, and Norman's rather adorable relationship with his potential grandson.