do you know what i’m going to do?

A thought: I spend so much time in this blog on older movies... It used to be for practical reasons; if I had previously seen the film (and prior to this recent deconstruction, I didn't have to have seen the film numerous times) it made it easier to write about it while the movie was playing. Saved a lot of time that way. More recently, the premise has been films I have seen multiple times, especially when I was young. So, aside from the occasional new film that really offers something to add in the context of this blog, I don't say much about new films. But, I like talking about movies, old and new. I liked doing my YouTube reviews while I was doing them (and I have described before how the frustration with getting views timed badly with me getting better at editing the clips together). And, I'd like to do something like that again. I'd prefer a slightly different format (or maybe a bit of both), discussion with another person, but I never made an effort to find someone to do videos with. I feel like doing something like my YouTube stuff again.

(Sidenote, because I am still watching Arthur tonight: one of the switches on Arthur's bathtub control panel is marked TRAINS. He switches it and the trains in the bedroom, which he cannot see from the bathtub, start running. Hobson, walking through the bedroom right then, stops and shuts off those trains before coming into the bathroom with martinis. It's a cute moment, like maybe Arthur does this every time he takes a bath, and that switch is there just so that he can mess with Hobson. Also, this quick combination of Arthur activating the trains and Hobson immediately turning them off--I never noticed it before.)

Of course, there is still this blog. Just one more film for 1981, I've currently got nine films for 1982, eight for 1983, nine for 1984, and eight for 1985. (That last one was just four a moment ago but that seemed like too few to do that year justice, so I checked boxofficemojo and doubled it.) And, since my birthday is at the end of January, I figured I'd end this deconstruction in time for my tenth birthday, so add one film for 1986. (On my larger list, in case I wanted to go further than the first ten years, there are three more films for 1986, a whopping twelve films for 1987, just five for 1988, and then four more films beyond 1988, you know, just in case. I don't think I will get to any of those, but we'll see.) I am skipping some major, and meaningful, films from these years I'm covering, but that is what happens when the angle is specific--if you're just now happening upon this blog, the current premise is rewatching movies that I watched a lot when I was young. That does not mean that I watched them a lot within those first ten years; there was much more viewing in the second half of the 80s and into the 90s than in the first half of the 80s. But, while I can often specifically recall the initial viewing of a particular film--some basic details anyway--I cannot be entirely sure when any particular film was in heavy rotation. Like in my teens, we would often have people over on like a Saturday night to watch movies and eat burritos. People we knew from church. At least one teacher from my school. Friends of my older sisters.

(Sidenote regarding Arthur: I wonder if the film had a monetary link to Ferrari; Linda wears a Ferrari t-shirt and carries a Ferrari sports bag, in separate scenes. However, none of Arthur's cars are Ferraris. She also wears yellow and red. Also, the florist recommends yellow roses to go with red when Arthur is buying roses, and I wonder if there is a specific meaning to that combination, was it a choice by Liza Minnelli, or was that simply the easiest combination of bright colors to counterbalance all the greys and blacks and beiges that Arthur wears?

These are things I notice watching familiar movies. Odd details that wouldn't have stood out long ago feel like they might mean something. Like I could spend an entire blog entry on the colours yellow and red if I were spending more than just three days with this film.

For example, Arthur wears a red tie, and Linda wears red, when Arthur offers her $100,000. Arhur's race car has yellow and red stripes. Arthur wears a yellow sweater when he visits his grandmother. She has just purchased a Vermeer--she calls it "Woman Admiring Pearls" but it's apparently actually called "Woman with a Pearl Necklace". In this painting, the woman wears yellow and the drapes are yellow, and there is a red flower in the woman's hair. One could draw a connection between the painting and Arthur beyond the painting simply as symbol of wealth. But, who has the time?) 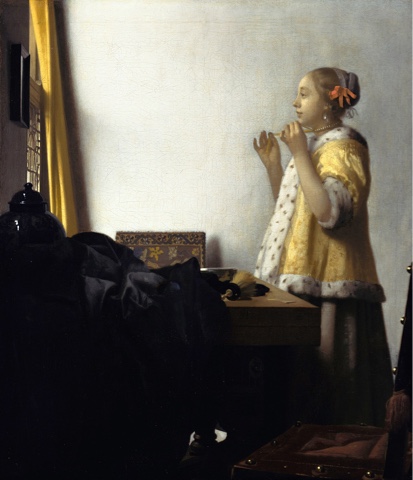 (I do have the time, of course. But, I'd rather ramble about larger plans today, save topics of color in Arthur for some other blogger in some other blog.)

We would rent movies a few times a week. In the 90s, when I was in my teens and 20s, it was even worse; we moved into a house that was just a few blocks from an independent movie rental place and about half a mile from a Blockbuster Video. Plus, by then, I was buying movies on video, too. And, I'd walk or take the free bus (Pasadena had those) across town then, too, to see a movie. Often.

Still there are always more movies. Great films I never got around to watching. Awful films I just never noticed when they first came into existence. As long as a film is not boring and/or mediocre, I will generally give it my time. When I have time. Just yesterday, I watched two bad movies--Samurai Cop and Miami Connection. This blog, even when it doesn't have a long-term premise like the childhood deconstruction it's got going right now, tends toward monthly themes, and so random films on a day without other plans get lost. I could live tweet the viewing (and I have done so and probably will again; it's quite fun), but it would be nice to do more. Revive my YouTube thing, but allow for old forgotten films as well as new ones. And, maybe let phase four be (again) the end of the Groundhog Day Project.

Or do both, but I can probably only make time for both if I manage to monetize one or both and that means better promotion and more views. But, who knows? Maybe I'll manage.

(Meanwhile, Arthur wears white (slightly off-white, actually) at his engagement party. Susan also wears white. (Though she is seen in one shot near a strange table display with red(dish) lobsters and yellow lemons.) Linda wears black and pink. Surely, the costumer director, if no one else, chose the colors deliberately for scenes like this. But, alas...