I was going to start today's entry with a note I neglected yesterday: the first Grease does have one beat that the sequel doesn't--while Sandy changes for Danny and Michael changes for Stephanie, Stephanie doesn't change at all for Michael, but Danny does at least try to change for Sandy. He tries out for varsity sports, tries to clean up his image. It doesn't really take but Sandy's change covers the distance between them enough to make up for it. Stephanie, on the other hand, gets away with not even trying, yet Grease 2 almost feels like it wants us to see her as a feminist icon of a sort for the 60s setting, whereas Sandy was a good girl from the 50s until her makeover.

I was going to argue, counter to the obvious point I made yesterday--that the message of both films is a bad one--that taking as singular instances, they're not so bad. If Sandy wants to change for Danny, that's on her. If Michael wants to change for Stephanie, that's on him. But, then 1) it becomes readily important to recognize that movies don't work that way--a singular instance in a self-contained story is almost automatically universalized in the mind of the viewer, and a well-made film (not that Grease or Grease 2 is a particularly great film) turns the specific into the every. 2) I saw Call Me By Your Name again this evening and I would rather deal with a tangential issue. Not whether or not it's okay to choose to change for someone else, but rather the larger forces that make someone have to.

Taking Grease and Grease 2 as the case studies, Sandy is very much stuck in the American 50s, though she yearns for something more. We fault her change in the end because it's all on her when Danny should have to change, too, sure, but also because she's changing away from what's "normal", what's "proper", what's "acceptable." Michael makes that same change (and as I said yesterday, it's more acceptable in him because's he's the guy), but specifically laments in "Charades" that he's a "costumed fool trapped in a tragic game." It's not comparable to the situation in Call Me By Your Name or in far too many real world places where people are rejected over their gender identity or sexuality. But, the point is the same in that it is outward forces that create the situation where this change has to happen. Stephanie can't want a guy like Michael because she's stuck in a 50s cycle of tough guys in leather and their women as property. Before the first scene of Grease 2, of course, she has rejected part of that setup, but she remains a Pink Lady through the school year nonetheless. It's all she knows.

As if that's a good excuse. What you know, what people put upon you, and what you want--these things don't have to be the same. And, frankly, it's despicable that parents and religious figures, and politicians, try to force people into traditional roles. Honestly, I want to say that Sandy's change is awesome, good for her, and all that, because fuck the wholesome girl-next-door bullshit, fuck remaining a virgin just because society says you're supposed to. And, if fixing up a motorcycle can get you the girl, Michael, have the fuck at it. He even tries to be honest about it the very next morning after his debut outside the bowling alley. (Unlike Louis' outright lies about war to get Sharon into bed (even if the double entendres in "Let's Do It for Our Country" are quite clever).)

But, you really shouldn't wear a leather jacket without a shirt under it. That look just doesn't work.

Well, maybe when its' just a vest and you've got mussed up hair from pulling off your helmet and goggles... 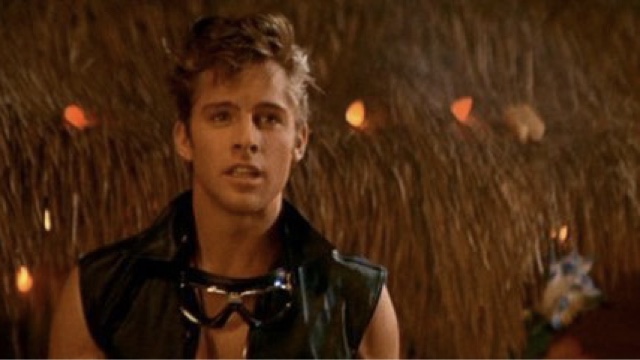 It's weird trying to write about Call Me By Your Name and Grease 2 at the same time. They are different ends of multiple spectrums by which one might judge films. I mean, take these lyrics from "Prowlin'":

There's a female butcher, at the luncheon meat display
Got the best tongue in town, she delivers both night and day!
See the apple of your eye, stackin' peaches in a five foot pile
Just waitin' some guy to come, and take her rollin' down the aisle!

Versus this bit from Call Me By Your Name, one of the best scenes in any film last year:

We rip out so much of ourselves to be cured of things faster than we should that we go bankrupt by the age of thirty and have less to offer each time we start with someone new. But to feel nothing so as not to feel anything--what a waste!

Night and day. Teenage boys (played by guys in their 20s) talking about scoring with girls who work at the grocery store versus a father talking honestly with his son about relationships and embracing how you feel and who you are.

There's a line--in Italian, so I don't know about the exact translation--in Call Me By Your Name: "Cinema is a mirror of reality and it is a filter." And, in reality, we change who we are in order to be accepted by new people, new friends. In order to get the guy, get the girl... get the nonbinary person. A film suggesting that you need to change--that's not right. But, we do it all the time. What matters is why. If Sandy is happy with Danny after putting on those tight pants and changing her hair, good for her. If Michael can be happy as a T-Bird, and he and Stephanie can love one another, good for them. Just as long as they don't let anyone tell them who to be.

Movies about this stuff, about identity and change and love and all the stuff we roll up together because we can't let anything be simple--gotta love 'em.

And, on the one hand, no, one movie, one story, one message doesn't have to be universal. But, if the audience didn't take in messages as things larger than just that one story, movies wouldn't be worth watching. The way we tell stories like these--or any stories--matters because how we choose to represent our ideas about identity and about love and romance, about anything, reinforces and recreates those things in reality. Life inspires art inspires life, and it circles around and around and around. It's award season so there are all over the Internet people talking about keeping politics out of movies and music and awards and whatever, and the last few days, there have been some great responses, because art in any form has always been political, but more importantly has always been an echo and a filter, and a building block, of life. Art can push reality in one direction or another. Life can push back or life can go with the flow. And, accordingly, art can keep pushing, or remind us where we are, or both. And, I could keep repeating the same point with different wording, but that would just be another echo of the same idea.