and where the hell was i?

The Naked Gun: From the Files of Police Squad! adds a writer--Pat Proft--who wasn't with the Zucker Abrahams Zucker team before. He had worked on Police Squad! with them, but as far as movies go, he'd worked on five Police Academy films and Real Genius, among others. Pretty early on, it's already clear that this movie has far fewer non sequitur gags. And pretty much no puns.

Four years from Airplane! to Top Secret!, another four from Top Secret! to The Naked Gun, and the difference between the latter two seems far larger than the difference between the former two. If I wanted to break down in a horribly detailed fashion the changes in joke delivery in film over the course of the 1980s, the changes here might mean something, but I think whatever it is is escaping me for now. Like, were the non sequitur gags and asides something we needed as a response to, say, some late-term Cold War societal pressures, and by 1988 those pressures were dying down? 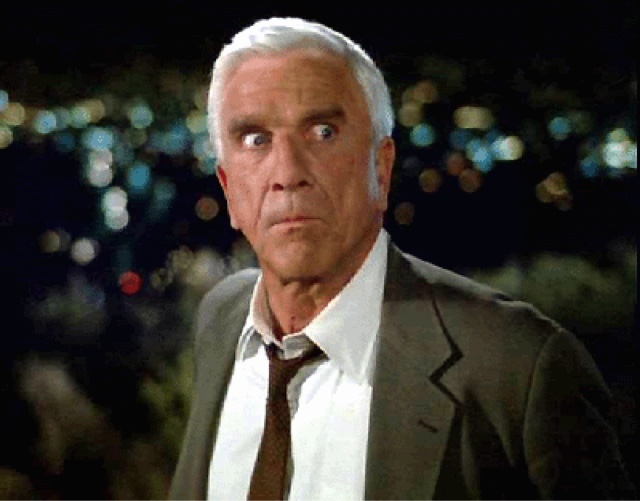 (Nice quick sight gag just now at the police lab. Drebin (Leslie Nielsen) walks around the wall between two rooms instead of going through the door. The set was clearly two rooms next to each other as you might ave on a television show like Police Squad!, camera pans from one to the next as characters pass through the door. But, then Drebin doesn't. Otherwise, this is more plot driven than joke driven... which I'm not sure is a good or a bad thing, but it's definitely a thing.)

As for serious critique of this movie, singularly, I think my old standby Roger Ebert beat me to the problem; he writes,

The film is as transparent as a third-grader with a water gun, and yet I would rather review a new film by Ingmar Bergman, for there, at least, would be themes to discuss and visual strategies to analyze. Reviewing "The Naked Gun," on the other hand, is like reporting on a monologue by Rodney Dangerfield - you can get the words but not the music.

Now, this scene right now with Jane (Priscilla Presley) at Drebin's house, sounds more like the same humor as Airplane! or Top Secret!. There are even stupid puns.

I remember being more entertained by this movie when I saw it in the theater. Then again, I was twelve. While I was saying the other day (and Mal agreed in a comment) that Airplane! holds up because it keeps coming back to the throughline of its plot, I think, oddly enough, that The Naked Gun could use more twists and turns away from its plot... and it could use more of a "straight man" main character. Ted Striker may have had a tendency to long drawn out narratives that bored people to suicide but at least he seemed like an actual character rather than a walking, talking joke. Same with Nick Rivers. Frank Drebin, on the other hand, met and fell for Jane in a day and I just don't care.

That security search bit with Frank getting into Ed's pockets instead of the guy's in between them was pretty funny, though. A lot of this movie is funny. It's just not very good.