the glass slipper of our generation

Tyler Durden doesn't really exist. Obviously. But, there are those online who try to suggest that Marla doesn't exist either. The bit about the hallway mirror with no reflection for either Tyler or Marla is a good piece of evidence for the nonexistence of Marla, except that the scene in question isn't real either because The Narrator isn't there.

I saw an argument for the nonexistence of Bob as well, but then we're just falling into Jack's Rabbit Hole Brain where nothing actually happens and where's the fun in that?

Thing is, Marla is still The Narrator's Power Animal. Not as cute as the penguin, but more fun.

But, I don't want to start there. I want to start with Marla's ring. See, The Narrator's acid scar later is in the shape of a mouth because Tyler kissed his hand to... interact with the chemical? I don't know the science, but that seems to be how it works. Anyway, before we see The Narrator's scar, before we see Tyler's, we see Marla's ring, a pair of big red lips positioned just a little higher on the back of her hand than that scar. Backtracking to before yesterday's argument, let us assume this is a movie about the emasculation of men in modern society and men (some of them, anyway) lashing out because of it. It is Marla, then, who scars them. She's the lone representative of women in the film--

(aside from a few background extras and bit parts, the biggest of which is Chloe, who is dying but is also desperate for sex. Which brings up an interesting idea, actually. Fight Club's version of men are those capable of violence, capable of anything. There is no mention anywhere in the film about children or being tied down by marriage--except for Marla's bridesmaid dress, but we'll get to that--except for that one guy at the testicular cancer meeting talking about how the woman he used to be with is married now and just had her first kid. Chloe represents an opportunity--so does Marla in the script, as she tells Tyler she wants to have his abortion (that line got cut because Fox 2000 president Laura Ziskin didn't like it, but it got replaced with "I haven't been fucked like that since grade school" ...be careful what you wish for and all that)--explicitly expressing how she wants sex but since she's already dying, there are no consequences. Or maybe that's one more form of emasculation. Can't sow your seed, does your gender even matter?)

--and cinematically, yeah, she represents one side of The Narrator's personality. But, that doesn't mean she doesn't exist. Her role in the construct of the film and her role within the reality of the film are two very different things. That she and Tyler dress alike, that they both smoke--both of these facts are used as evidence at jackdurden.com--only proves that The Narrator modeled Tyler, at least in part, on her. Hell, The Narrator--

(And, I don't want to call him Jack, even though he is called Jack in the script, because the movie never tells us that is his name. "Jack" is the name of the imaginary guy whose internal organs wrote descriptions of themselves. The Narrator just adopts that label for his own, well, not organs, but feelings. Plus, Edward Norton's character's name is Tyler Durden, duh.)

--is entirely materialistic before he meets Marla. He might adopt a Spartan lifestyle because of practical reasons with Tyler but it is Marla who introduces the idea, going to the groups because it's cheaper than a movie and there's free coffee (unlike The Narrator, who goes to them because he's miserable), stealing laundry to sell it, stealing meals on wheels, and living in a hotel. Marla is where The Narrator gets the idea for Tyler...

Sort of. Tyler has already appeared one or two times on screen in flashes before The Narrator even meets Marla. 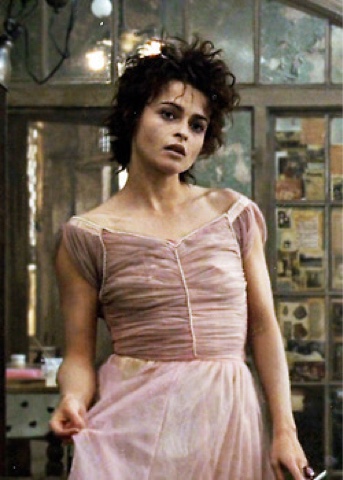 The interesting thing for me--Groundhog Day Project and all--is that Tyler is what happens when Jack tries to change after meeting Marla, just like so many folks (that I used to like to argue with) would say Phil Connors changed because he met Rita. But, it's not so simple as that. The Narrator doesn't want to be like Marla. It's difficult to really argue that he wants to be with Marla. She's more of an expectation. An affectation of story. There must be a love interest.

And, the classic plotline dictates she must pair up with our protagonist. Given the twist of the Tyler/Narrator dichotomy, Marla does do just that. She pairs up with with both of them. And The Narrator saves her from Tyler, twice.

Still, she's got that bridesmaid's dress.

MARLA
I got this dress at a thrift store for one dollar.

NARRATOR
It was worth every penny.

MARLA
It's a bridesmaid's dress. Someone loved it intensely for one day, then tossed it... Like a Christmas Tree--so special, then... bam--it's on the side of the road, tinsel still clinging to it. Like sex crime victims, underwear inside-out, bound with electrical tape.

NARRATOR
Well then, it suits you.

MARLA
You can borrow it sometime.

jackdurden.com suggests, of course, the dress is already The Narrator's. But, its ownership is not as important as what it represents. Not just single-serving clothing, but a single-serving identity. For that one day you are a bridesmaid. The bride's role, the groom's--those go on. But, you exist only for that day. You are single-serving. It is at once the best contradiction of and the best evidence for Tyler's assertion that "You are not a beautiful or unique snowflake." You are unique in that you are simply who you are right now, whenever now may be. But, you are also just one in several billion people currently living on this planet, not to mention the billions who have come before. You are not unique except inasmuch as you demand to be unique. Tyler is wrong as long as you want him to be. As long as you are not content with your Ikea furniture, your Starbucks, your khakis, and everything else that owns you.

Me--I like the Ikea furniture I've got, especially the bookshelves.I enjoy Starbucks far too often because I'm a caffeine addict. But, maybe I'm getting somewhere because I don't own any khakis...