waiting for my life to begin

[Parasocial relationships] are a set of feelings viewers develop toward media characters that allow viewers to think and feel toward characters as if they know and have a special connection with them. (Eyal & Cohen, 2006, p. 504)

Struck by Lightning is on again. Saer is here watching, of course. Her in was author/star Chris Colfer. But, the setting is generic movie-high-school enough for anyone to get. The main character is a writer, he's a bit of a sarcastic smartass, and he blackmails popular kids to get them to write for his literary magazine--I should love this. But, it's almost too generic. Still, Carson (Colfer) is wry enough to be entertaining. Fisherkeller (1997) suggests that our parasocial relationships--for teens at least--can get us models for our own behavior. My daughter, for example, wants to act (in movies, on stage, wherever really--a while back she starred in a stage production of To Kill a Mockingbird and I think I mentioned that in the blog... [I did]) so she could certainly appreciate Glee and its... What's the positive version of a wannabe star? Not just dreaming about it but doing things. Eyal and Cohen (2006) suggest that teens can see how to "achieve goals that are related to the development of their identities" (p. 504, citing Fisherkeller).

The thing is, a lot of these high school movies offer up "heroes" who are not great idols. J.D. and Veronica kill people. Cady is too naive to for anyone to look up to her. Fern gives up her self at the drop of a hat and agrees to cover up what she might as well believe is murder. Mark is a criminal, even if he does speak out for good reasons. And, so many cinematic high schoolers are obsessed with coupling, for sex or misguided love. 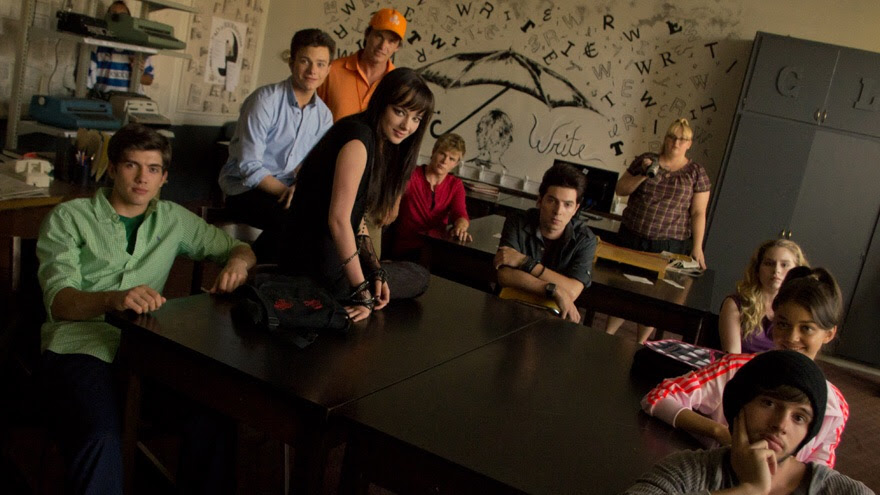 Once again, I would point out that the process is not deliberate. It can be, but it generally is not. We naturally identify with people like us, or people we want to be; it's why movies work, really. Not wish fulfillment, exactly, but something like it. We want to see ourselves (or our fantasy selves) up there on the screen.

Maybe it's because our own lives suck--research suggests that isn't the big reason for parasocial relationships--or maybe just for a distraction from the everyday, or maybe just because we look good up there on the bigscreen. My sarcasm plays much better out of the mouth of, say, Christian Slater or Bill Murray or Chris Colfer. In the real world, the sarcastic asshole keeps people at a distance and they don't learn to love him anyway. He doesn't get struck by lightning. He just keeps on living, alone.

At the end of book--Colfer wrote the book based on his screenplay--Carson's mother (Allison Janney in the movie) tells a reporter:

I was reading the lightning is a negative charge that comes from the friction clouds carry. Since opposites attract, I would like to think that he was so positive the moment he died--so happy, he pulled that bolt right out of the sky. I don't know if that's possible, but it's what I believe. (p. 258)

As the credits roll, I realize I liked the movie more the second time. The message is simple but worth repeating... Like Neil Gaiman's Death says, we all get the same thing--we get a lifetime. Death is inevitable. Like Phil Connors figured out in Punxsutawney, the point is to live in the meantime. As Carson says before we see his death again:

...a life without meaning, without drive, without focus, without goals or dreams, isn't a life worth living. Life comes at you fast. It runs through your body and tries to escape and be expressed in any way possible. In a way it's a lot like... lightning.--