so sick of being picked apart by women

Alyssa Rosenberg at the Washington Post calls Amy Elliott Dunne (Rosamund Pike) in Gone Girl "the only fictional character [she] can think of who might be accurately described as simultaneously misogynist and misandrist. In fact she hates pretty much everyone else on the planet, except, briefly, her husband Nick" (Ben Affleck). Like Chad Piercewell in In the Company of Men, yes, she seems to hate everyone. She may have only ever gotten together with Nick in order to have something that "Amazing Amy" doesn't have.

(In case you haven't seen the film--and don't mind the inevitable SPOILERS that will happen in this blog entry--"Amazing Amy" is the children's book character created by Amy's parents. Amazing Amy tended to have it better than Amy did. As Amy puts it, "When I was 10, I quit cello. In the next book, [Amazing] Amy became a prodigy." Asked if she played volleyball, she adds, "I got cut, freshman year. She made varsity." Asked, "When did you get a dog?" she replies: "She got a dog. Puddles made her more relatable." Amazing Amy is Amy's real "better half" as it were, since her marriage has quite readily fallen apart.)

Robert Palmer at Interrogating Media (a book blog, I think), in response to the book's author, Gillian Flynn claiming on her website that she created Amy Dunne because she had "grown quite weary of the spunky heroines, brave rape victims, soul-searching fashionistas that stock to many books," writes:

You're tired of the "brave rape victims"? Considering what you do in this novel, give me a fucking break. That aside, Flynn's project--that of writing interesting female villains--is a fascinating and completely worthwhile endeavor. I just think the thought process by which she's arrived at this project is deeply flawed. Let's pay close attention to what she blames for the lack of compelling female baddies--the lack of the female dark side: "The point is, women have spent so many years girl-powering ourselves--to the point of almost parodic encouragement--we've left no room to acknowledge our dark side."

Essentially, she blames feminism. There has been too much girl power--almost enough to be parodic--and now we can't have proper female villains.

He goes on, but you get the point. Amy Dunne, who manufactures her own apparent murder, frames her husband for it, then rejects (by killing him... oh, SPOILERS) the ex-lover who takes her in to effectively blackmail her husband into being whatever she wants him to be--she is not a construct of feminism, but in response to feminism. David Cox at the Guardian suggests that Amy is "absorbed by a kind of totalitarian narcissism that's beyond male understanding." Certainly beyond Nick's understanding. She's too smart to be a cinematic femme fatale. And, yes, too feminine to be a genius supervillain. The question is, is she a great villain anyway? The previously cited Palmer calls Amy "not an interesting or compelling villain" but rather "the crystallization of a thousand misogynist myths and fears about female behavior." He adds: "If we strapped a bunch of Men's Right's Advocates to beds and downloaded their nightmares, I don't think we'd come up with stuff half as ridiculous as this plot."

I wonder, however, if it's something like the opposite. Whatever Flynn says, whatever Palmer (or other reviewers say), Amy Dunne is who she is. Or rather, she is what we take her to be. Like any great character, Amy Dunne can be taken as feminist, and can be taken as some reactionary anti-feminist nightmare. At the same time, or by different parts of the audience. I mean, maybe Palmer has a point in saying, "The specific ways in which Amy is evil (lying about rape, using pregnancy as a manipulative device) feel so entangled with misogynist caricatures created by antiwomen and antifeminists," but what else is Amy going to lie about or use against her husband if she is to both be a manipulative villain and, quite explicitly, female. It is perhaps for the same reason that those antiwomen men would invent or imagine such caricatures, a character like Amy must fit them. What else is there? Have her machinations be unattached to her status as a woman, as a wife, and surely there would be complaints that she is just a woman-in-name-only. That is hardly feminist. Cement her manipulations in that same status--woman, wife--and there are complaints of it being cliched. Flynn couldn't win either way. Neither could Amy. 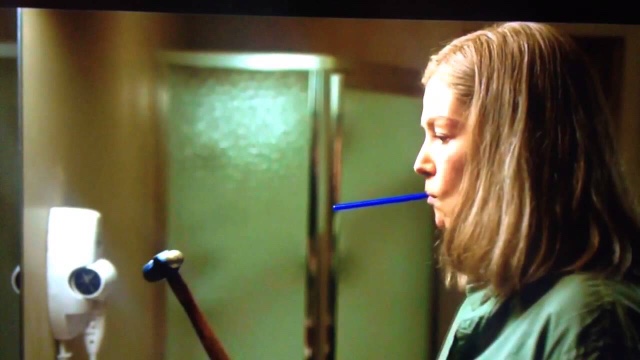 To be fair, the same is true of Nick; his horribleness is caught up in the usual cheating husband schtick. This couldn't just be a bad marriage, two people who just didn't work out over time. It's packed with cliches all around. The key to Nick's character--the scene playing right now, actually--is that he admits openly to his nature as a bad guy. Amy just keeps playing one part or another. Flynn herself told Oliver Burkeman at the Guardian that the thing that frustrates her "is this idea that women are innately good, innately nurturing. In literature, they can be dismissably bad--trampy, vampy, bitchy types--but there's still a big pushback against the idea that women can be just pragmatically evil, bad and selfish." One person's pragmatic, I suppose, is another person's cliche.

Burkeman, O. (2013, May 1). Gillian Flynn on her bestseller Gone Girl and accusations of misogyny. The Guardian. Retrieved from http://www.theguardian.com/books/2013/may/01/gillian-flynn-bestseller-gone-girl-misogyny

Rosenberg, A. (2014, October 3). Is 'Gone Girl's Amy a misogynist? A misandrist? Or both? Washington Post. Retrieved from https://www.washingtonpost.com/news/act-four/wp/2014/10/03/is-gone-girls-amy-a-misogynist-a-misandrist-or-both/