i gave her my heart, and she gave me a pen

(Nitpick: the timeline is a little messed up at the beginning of the movie. Opening scene, before graduation, Lloyd tells Corey (Lili Taylor) and D.C. (Amy Brooks) ????? that he's going to take Diane out again--they sat together in the food court at the mall. That's point #1. Graduation happens, and Lloyd calls Diane but gets her father instead. He specifically mentions that he sat with Diane at the mall "yesterday." This is presumably still the day of graduation. Point #2. Immediately after talking to Lloyd, James Court gets a call about Diane's fellowship. Now, editing suggests Diane calls Lloyd back on this very same day, but he tells her he read about her fellowship in the paper. I would assume her father got that put in the paper, meaning this is at least the next day. Then, they're going to the big graduation party, which editing suggests is still graduation night. But, we've covered at least a couple days already.

Maybe I'm just looking for something wrong because, despite a few tonal flaws here and there, I love this movie.)

The best bit in the movie: Lloyd's future plans.

He's into kickboxing when that sport was new, so even his one plan doesn't have longevity. What he wants to do is date Diane, because he's "good at it." The great thing about Lloyd is how readily he jumps into Diane's world when she drags him into it, hanging our with the old people and watching Cocoon. His three best friends (all girls, the aforementioned Corey, D.C. and Rebecca (Pamela Adlon)) all agree that if they were Diane Court, they would fall for Lloyd, and everyone at the party seems to like him.

Diane, on the other hand is an only partially known quantity prior to graduation--valedictorian and "rich" girl--no one really knows her. And, she keeps them at a distance as well. Hell, even for the audience, it takes a while before you can really see why Lloyd might be so enamored of her. For me, that moment is when she and Lloyd are in the backseat of the car and she notices that he's shaking and pulls the blanket up around him. Also the way she says, "But then, I attacked him anyway." Suddenly, she's more of a character than an... object.

The relationship gets into the realm of how Roger Ebert described it way back when: "intelligent and filled with that special curiosity that happens when two young people find each other not only attractive but interesting - when they sense they might actually be able to learn something useful from the other person." This isn't a romantic comedy. It's hardly even a romantic drama, even though that image of Lloyd Dobler with the radio over his head has become a romantic icon. The movie is... something else. "Girl made me trust myself," Lloyd tells the other guys in the lot of the Gas & Sip. That's something beyond simple notions about love or, especially, cinematic notions about love.

It's better than that. 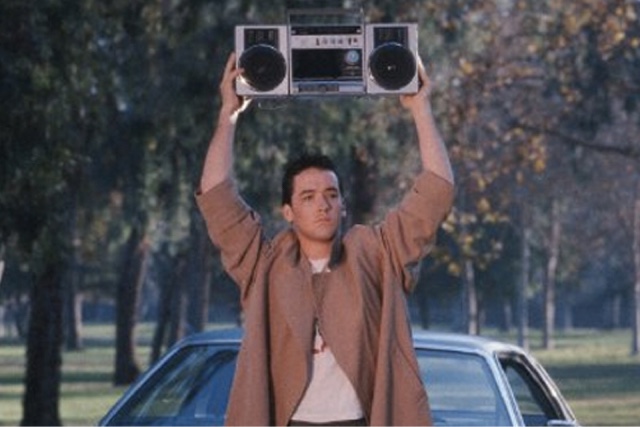 That the third act hinges on Diane's relationship with her father turns the movie into something it hasn't been previously. It's actually an interesting choice, make her the bad guy dumping Lloyd then force us into her side of the story, show us what else she's got in her life and how it's built not on honesty but lies. Hell, she doesn't even respond to Lloyd with the radio over his head; she doesn't even see it. She stays in her bed.

She barely deserves Lloyd when she comes to him later. But, the movie has made it pretty believable that Lloyd would take her back.