there's something wrong with nana and pop pop

I've complained before about M. Night Shyamalan. Hell, I've complained in this blog about M. Night Shyamalan--primarily Day 375 - used to tell you bedtime stories when I added a viewing of Lady in the Water to my week with The Sixth Sense. I am one of those folks who loved Shyamalan about when he first made it big, then was increasingly disappointed thereafter as the films mostly followed a linear trajectory downward in quality. The Visit is not a great film but it is well above that downward trajectory and it's actually pretty good. 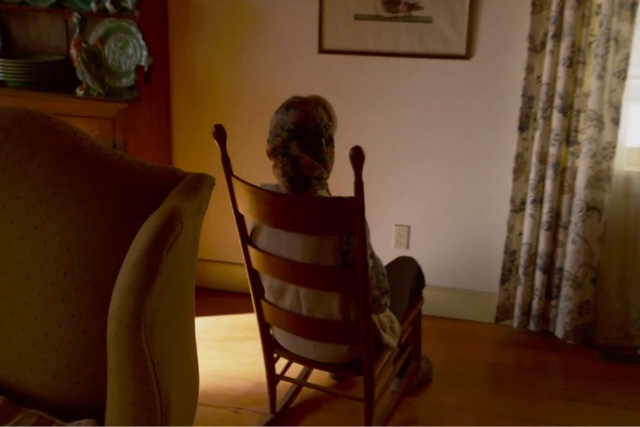 Shyamalan dips his feet into the "found footage"* waters with a couple of kids sent to spend a week with grandparents they've never met.

* MINOR SPOILERS: "found footage" implies dead protagonists in the end. From the start, given that this involves kids, you can safely assume they will survive. But, The Visit is built on footage filmed by those kids as the older sister, Becca (Olivia DeJonge) wants to make a documentary--and speaks in cinematic terminology in the first act more than her brother, Tyler (Ed Oxenbould) speaks in pseudo-hip hop terms--he does some freestyle rapping a few times in the film and also goes by the name T. Diamond Stylus. (Amusingly, Pop Pop (Peter McRobbie) refers to him by this name rather than Tyler.)

The film builds tension well during the night sequences, but also plays a little too much with inappropriate tension in numerous other scenes--MINOR SPOILER--the two different oven sequences, for example. The Yahtzee game is entertaining though, one of the highlights of a third act that drags a little bit; the twist--yes, there is one--comes a little early, I think.

So, key to the twist is the fact that Becca and Tyler have never even seen photos of Pop Pop or Nana (Deanna Dunagan), and in act one, Nana "accidentally" messes up the webcam on Becca's laptop (oh, and there's no cell phone service in the area) so it isn't until the second plot point that Becca's and Tyler's mother (Kathryn Hahn) sees the grandparents with which her kids have been staying and, surprise--they aren't the kids' real grandparents but impostors from the nearby mental hospital where the real Nana and Pop Pop volunteer as counselors.

Which a) means we've been watching (and occasionally laughing at) the behavior of a couple mentally ill old people, which isn't the nicest setup in retrospect, but hey, it's a horror film, it doesn't have to be entirely PC (hell, before the film, we had a trailer for Eli Roth's The Green Inferno and despite some obvious racial and cultural problems in that one, I'm looking forward to watching it) and b) is better the alternative I briefly feared might happen after Nana tells Becca a story about aliens who have a bunch of kids stored in the bottom of a pond in order to take them back to their home planet. Seriously, a decade ago, I don't think there would have been a question in my mind that Shyamalan was going to take the story in that direction. After the aforementioned Lady in the Water, I would have assumed that any story any character tells is going to turn out to be entirely true later. Apparently, he's gotten over that.

Over a self-cameo, as well. There's barely room for any cameos, in fact, because the film spends almost all of its screentime with just four characters. Unlike Lady in the Water, The Happening, or even The Village, Shyamalan doesn't get as caught up in a story trying to be bigger than it is. (There's an unearned theme about not holding onto anger in the end of the film, but that seems more personal than universal and only wastes a handful of seconds of screentime, anyway.) He does get caught up in a few cliched horror film visuals--Nana crawling around like an animal, or appearing suddenly before the camera, plus the big climactic fight between Pop Pop and Becca happens in the dark basement where she has just found her real grandparents' dead bodies. It's Clover's (1992) terrible place to a T.

Other details worth noting: the film avoids, surprisingly, the use of weapons. A piece of broken mirror is the only one. Well, that and a refrigerator door. The mirror ties to a previous discussion between Becca and Tyler (who play quite believably as siblings) but doesn't resolve it as much as Shyamalan thinks it might. MINOR SPOILER: Becca brushing her hair in front of a mirror later before Tyler's final, tacked-on rap scene actually resolves the mirror bit better than this climactic mirror breaking.

Finally, the idea that Shyamalan supposedly put together three edits of this film, one that was comedy, one that was horror and one--presumably the released version--was somewhere in between does not surprise me; the film definitely shifts tones now and then. But, those shifts are not particularly abrupt, so there's that.

All in all, far better than some of Shyamalan's other films. But far below his best. Entertaining, sure. And the self-referential filmmaking stuff worked quite well for me, even when bits of the plot didn't.