the world is full of guys

"This movie features an OTP that is only shippable 50% of the time." - Saer Black

Say Anything again. I didn't find yesterday's entry to be that insightful or particularly interesting. After a week-long return to Groundhog Day, I suppose any movie would have been disappointing. Like the quiet episode of a TV show after the big-budget climax of the season has passed. (Well, unless it's Buffy the Vampire Slayer's "Restless"--that thing surpassed the climax of an episode earlier by a long shot.)

There are moments in this film worth entire entries. Sure, the brief shot of all the parents at graduation with their cameras out would probably just rehash stuff from that one The Sixth Sense entry last year. Sure, talking about those parents would lead to mention of James Court (John Mahoney) not having his camera up when his daughter is on stage, which is a really weird detail. Seriously, this guy dotes on his daughter like crazy, spending his ill-gotten funds on nice clothes and who knows what else on a regular basis, that ring and a car for graduation, not to mention that luggage set he tries to buy later. But, he doesn't have his camera pointed at her at the one point in the ceremony that he should. And, it's probably a nice camera, too, with all that filthy lucre he's got to launder.

(There's also room for a comparison between James Court and Mahoney's professor character in Moonstruck.)

I don't want to get sidetracked by James Court. If I were spending more time with this movie, he would get his own day, or two, but I don't have that much time for him. But, it must be said, he should not insist that his daughter is not a priss and then (given the confusing timeline on graduation day mentioned yesterday) maybe hours later insisting she call herself special, after you've gifted her with that car and ring. Especially when you identify her gentleman callers by the cars they drive.

Another thing worth writing about: the school counselor, Mrs. Evans (Bebe Neuwirth), shows up at the graduation party. At first it seems--and she implies as much by saying, "Call me obsessive-compulsive but we must do this now"--that she is there just to catch Lloyd because he missed all his career counseling sessions, but then their conversation ends and she drops her keys into his bag. She's there for the party and presumably she means to drink.

(Saer just pointed out that Lloyd says, "Today is tomorrow." A line from Groundhog Day.) 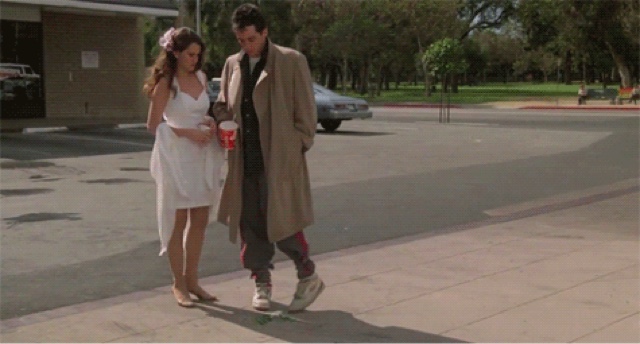 There's room for a discussion of the old standby in this blog--gender roles--too. The act that impresses Diane on that first date with Lloyd is his chivalrous bit with warning her about glass in her path and kicking it aside so she can get around it. (Plus, she seems to appreciate him checking up on her at the party before that.) Chivalry is one of those things that seems nice at first blush but bugs me when I think about it more because it relies on the notion that females need protecting. It's nice and all, but it depends on patriarchal notions that don't need to keep being renewed... as if courtesy cannot be extended to everyone. Hell, maybe Lloyd would do the same for anyone. We barely see him around any males in the movie other than Diane's father.

Diane chose to be with her father, because that seemed "safer." That's what she tells Lloyd. And she makes a habit of calling him when she's out. In the one brief scene with her mother, Diane also doesn't seem to like that another man arrives--Ray is her mother's boyfriend? new husband? It's so brief, I missed that detail again. Her father she has to herself. She can "say anything" to him. Their relationship seems to be built not just on honesty but openness, a willingness to share. He's not just her provider and protector but her confidante. Which a) makes his betrayal (however much it is not aimed at Diane) worse and b) makes Diane... incomplete. She chooses her father over Lloyd and well, in the end she needs Lloyd because her father isn't who he was supposed to be. 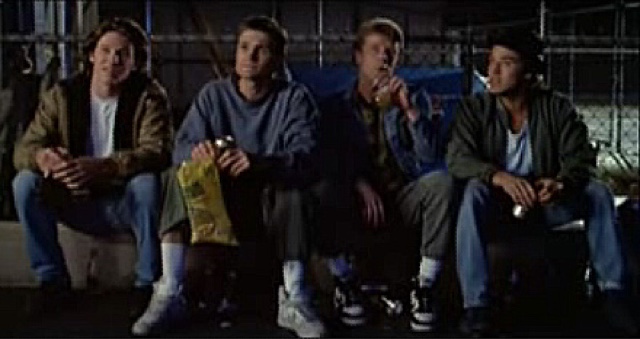 Additionally, regarding gender roles, there is the entirety of the scene in the parking lot of theGas 'n' Sip with the guys--

Joe (Loren Dean): No babe is worth it, you know? Hang with us, man, we'll teach you bibles of truth.

Howard (Gregory Sporieder) You can't trust 'em, man. Know what it's about? They spend your money and tell their friends. It's economics.

Denny (Patrick O'Neill): Man, all you gotta do is find a girl that looks just like her, nail her, and then dump her, man. Get her out of your mind.

Mark (Jeremy Piven): Your only mistake is that you didn't dump her first. Diane Court is a show pony. You need a stallion, my friend. Walk with us and you walk tall.

And Luke, who's like 12, has to leave. And, Lloyd has the best question for these guys.

Lloyd: If you know so much about women... why are you at a Gas 'n' Sip, alone, on a Saturday night, with no women anywhere?

But, that scene with the lawyers discussing James Court's punishment as if it's just another everyday conversation is also worth a whole discussion.

As I said yesterday, this movie is not a romantic comedy, not even just a romance. It's much more.

Of course, if you go back and read many of the arguments I have made in this blog you might see that I say the same of most any movie. Any movie worth your time should be more than just one thing.