i didn't want you upsetting yourself, honey

So, take away the Satanists, take away the details of that scene at the end with Rosemary seeing her baby, and what's left? A film about how crazy and hormonal a woman can be when she's pregnant, and how she can have a psychotic break when her child is stillborn. Most of the details that are here still work. People offering advice to a young woman pregnant with her first baby--that's certainly nothing new. A husband making demands on his pregnant wife--not new either.

The idea that this is what Rosemary's Baby is about isn't really anything new, either. 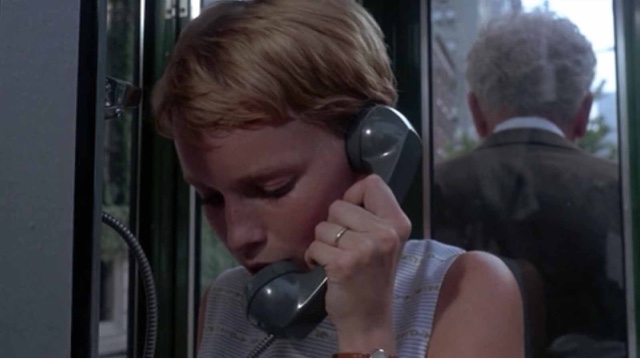 But, I noticed something yesterday while watching the movie. Now, the main guy's name is, well, Guy, which is plenty generic, and a bit obvious. (I have never read Levin's book, but just learned that Guy's name is made up. His name was Sherman Peden, but he changed it. To have more success as an actor, I guess.) But, Rosemary--not so much. Even if you shorten it to Rose, it's not so generic. Common but not generic. Shorten it, inexplicably, to Mary and you get into an extra level of religious symbolism, but Levin's story doesn't do that. Instead of Rose or Mary, Guy calls her, simply, Ro.

Or Roe. Though, don't get it in your head that I'm heading for some Roe vs. Wade reference, as that was years later. But, it is because of that case (and one of my students talking about just yesterday in class had it on my mind) that I know that Jane Roe was a pseudonym, a variation on Jane Doe. (Doe and Roe--both deer.) You don't hear much of Richard and Jane Roe, just John and Jane Doe. Apparently, if you have multiple anonymous parties, you might name the first one Doe, the next Roe, then Poe, and I'm sure there's a list, or a legal standard when it comes to court cases... the best I can find is that John Doe might be the plaintiff, Richard Roe the defendant, and there can also be John Q. Public, John Q Citizen, John Stiles, Richard Miles, or Mary Major. But usually, all we "normal" people ever hear about are the Does, a corpse on our favorite cop show, perhaps, the killer in SE7EN, the lead on that new NBC show, Blindspot, or that 2002 Fox Drama called John Doe. But, anyway. the main couple here is Guy and Ro. Last name--the made up Woodhouse, which seems a little meaningless. I've argued more than once about how Phil Connors is Groundhog Day

(If you've gotten to this particular entry directly, note the name of this blog.)

represents the everyman, anyone who is currently dissatisfied with his or her lot in life. Going with the usual interpretation of Rosemary's Baby then, Guy becomes a different everyman, any guy who wants a subservient wife. Ro becomes the conservative dream--a woman who stays at home and cooks and cleans and bears children. The worst she'll do is gossip with the girls.

So, what makes it a horror film, then?

See, I don't think it is specifically the Satanic elements that do it. Hell, until the end of the film, none of that stuff even need be real. There could simply be something wrong with Ro, or with the baby. Clearly, she's got some health issues. Whether that is because of the herbs and whatnot she's being given or in spite of them--that's debatable until the end of act three.

(One could read the end of this film as more of Ro's imagining, or hallucinating, with no confirmation of anything supernatural... That black mass or whatever it is, all the old Satanists sitting around that black bassinet, that could just be what is in Ro's head after her baby actually was stillborn. She'd rather imagine her baby as some... thing, and her role in the devil's family instead of the reality.)

The problem is that Ro is independent. She has a male friend--Hutch--over when Guy is out. She gets her hair cut short. She eventually rejects her doctor and everyone else. Plus, she's smart--and so is guy; just look at their Scrabble game: 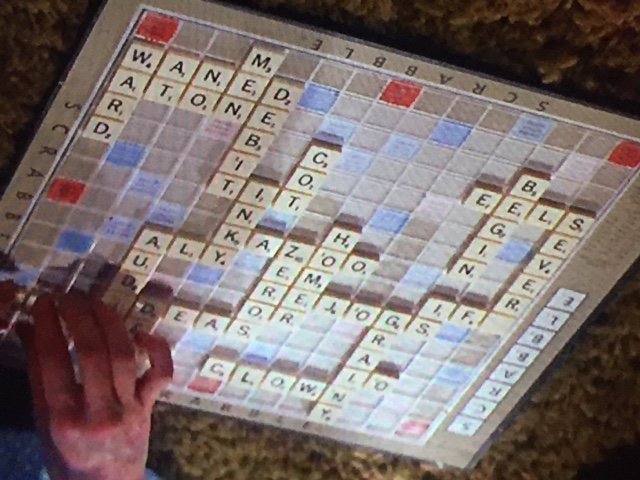 Aside from ALY and REJOGS, they've got some good words going, and someone started the game with either Zoo or Kazoo. Yes, this is the kind of thing I might notice while watching a movie.

There's a classist thing going on, as well. Sapirstein isn't just the recommended obstetrician because he's Satan-friendly but because he's famous--he was on the TV show Open End--and Ro's old doctor is, according to Minnie Castevet, "Dr. Hill nobody ever heard of." Guy later calls Dr. Hill "Charlie Nobody." Ro doesn't just want to associate with new high-class doctors and friends, though.

And, I feel like this entry is all over the place.

Basically, Satan and an independent woman are equally bad--that's the idea here. I am not saying that the film is telling us that this is true, but it is relying on this understanding. The world is in danger not because Satan might be able to have a child but because the woman he gets pregnant might have a mind of her own...