the beast has no brother

1. I don't know enough about Vatican II to really speak to the (apparent) decline of Catholicism in the late 1960s and the 1970s. Longtime reader of this blog, Mal, offered some insight in the comments on yesterday's entry--he described the sense of it as "either lots of priests, nuns, theologians and laymen throwing off the shackles of dogma and tradition, or else a mass submission on the part of Catholics to the fashions of the surrounding culture" and there was "a sense of disorientation and anxiety."

2. I do know plenty about the counterculture, especially in America, and the impression it had on the older generations. (Brag: I'm published on the subject.) And, I can attest that many of the changes going on in America at the time--the pill giving a nice jumpstart to the sexual revolution, for example--created that same "sense of disorientation and anxiety." The Los Angeles Times, 24 November 1968, called Middle Class America a "moral battleground." But, more on that later.

3. Omen III: The Final Conflict retcons the timing of these films so that the original The Omen took place in about 1955-56 (Damien would have been born in 1950).

4. That means that the film I'm watching today--Damien: Omen II takes place about 1962. And Damien is a teenager in the 1960s... which really is a little young compared to most of the counterculture, the hippies, the free speech movement folks, the antiwar folks... all those fun people--that moral battleground. But, in Hollywood terms, it's close enough.

The opening sequence of this film, with Bugenhagen and his friend figuring out that, yep, the Antichrist has been born (five years ago) is a bit of a cheat. Seriously, they are buried alive after finding that some painting in a ruined crypt... or whatever that was, has the face of Damien Thorn with snakes for hair. They cannot get this information to anyone. They cannot affect the plot at all. It's just a bonus cold open for the audience. Which seems wrong.

Damien (Jonathan Scott-Taylor) is now 12, and not living with the president despite that funeral scene at the end of the first film. Instead he is living with his uncle Richard (William Holden) and aunt Ann (Lee Grant). But, more importantly, he is friends with Richard's son (who is from a previous marriage, implying some comment on illegitimacy) Mark (a nice biblical name) (Lucas Donat). But, also, Richard's aunt Marion (a nice biblical name) (Sylvia Sidney), doesn't seem to trust Damien and wants Richard to separate the boys.

(Note: Ann is close to Anna, as well, which could also be a biblical reference.)

A blackbird shows up in Marion's bedroom--no Rottweilers this time, I guess--and she has a heart attack and dies.

Meanwhile, a complaint--and for the record, I did grow up going to church and private school, just not Catholic church or Catholic school, so I am familiar with the Bible--Richard's friend Charles (Nicholas Pryor) quotes the Bible in talking about the Whore of Babylon. Except, just like Father Brennan in the original film, he's both conflating different elements from the Book of Revelation and, well, just making shit up. Or rather the screenwriter made some shit up. Charles is talking about ten horns and then mentions the "little horn" which is from a vision in the Book of Daniel of a completely different beast than the one the whore is riding. If these films dealing in religion were a thing because of the (apparent) decline of Catholicism, I don't think misquoting biblical passages says much toward any notion that religion is something we should go back to in order to win over the evil around us.

I'm reminded of Hesse's novel Demian--and I had to check when it was published. Turns out it was much older than I realized. It's themes, as I remember them (it's been more than a decade since I read it) include turning away from the moral structure of society and acting on something more like instinct... The strange character of Max Demian plays like a devilish sort of temptation to the dark side of life. There were implications of a supernaturalness to Demian in my reading of the book, but that goes nowhere and he's more just a bad influence (in plot terms) and a reason to question the structures imposed upon us by society--religious ideas, political notions, or what have you--for the reader.

(The death of Joan (another almost-biblical name) (Elizabeth Shephard) makes me want to watch The Birds.)

Demian, though he was created during World War I, is like that "Dionysian impulse in the hippie counterculture" that Allen J. Matusow describes in The Unraveling of America.

(Damien reads from Revelation 13 and it starts well and ends well, but there's a bit in the middle about armies and standing against "the Prince of Princes" and that's just not in there. It occurs to me that everything I know about the "Antichrist" comes from movies. In my daily Bible class in school growing up, that wasn't really a thing. There was mention of a false prophet when we covered the Book of Revelation, but our church (and our teachers) didn't deal with that false prophet or "the beast" as something too specific. But, The Omen films, Rosemary's Baby, The Seventh Sign maybe, and surely some lower budget, more obscure films I'm not recalling at the moment--that is where I learned about the Antichrist. To me, the Antichrist is a petulant boy born to privilege...

Did my dislike of consumerism and modern capitalism come before my turn away from religion? I wonder. Did I distrust the rich and powerful because of an implication to evil? Or was it all of those horrible businessmen in 80s films that turned me away from capitalism?

Did all of me come from movies?)

Though people die around (and for) him, Damien doesn't really seem evil. In the original film, he's just a rambunctious little boy, and as I claimed before, his injuring his mother could very well be seen as accidental (and deliberately directed by Mrs. Baylock). Here, the only thing he has done directly so far is hurt (psychically) another student at school--the bully that his cousin had already punched. The other deaths in either film have had absolutely nothing to do with him, caused instead by apparent accidents if not other people committing the acts.

In that moral battleground, Damien actually isn't doing all that bad. 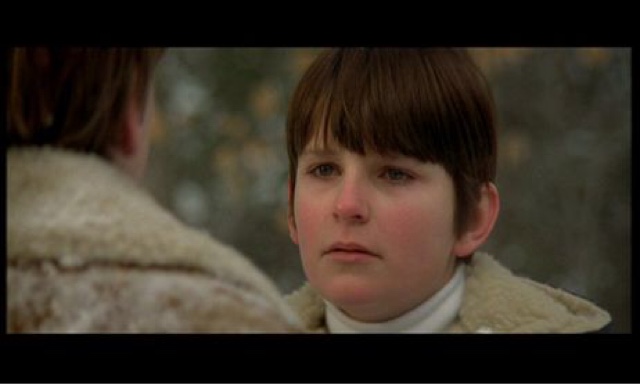 And, now Mark knows what Damien is. Damien wants him to go with him--

--but Mark refuses. And sure enough, Damien directly causes Mark's death. I guess I wrote that last paragraph a moment too soon.

And, I was just reading about how Saint Damian had a twin brother... It has been a while since I've watched this movie and I was sort of hoping Damien and Mark could be evil together, you know, so they could be happy. Now, I'm just wondering why it mattered that Mark was from a previous marriage... like Ann is only there for Damien. Duh. Sergeant Neff (Lance Henricksen), while obviously one of Damien's protectors, is just a misdirect. Ann's going to be evil, too. Mother and son, evil together. A happy ending, after all.

And, I meant to loop back around to the snakes on Damien's head in that painting.