isn't that what they said about the titanic?

The thing that always bothered me about Kubrick's The Shining was the casting of Jack Torrance. Now, since I haven't made it clear the last few days, I love The Shining. I think it is one of the greatest horror films ever made. But, I have read the book, and I longed (prior to the TV miniseries version in 1997) for a version that might offer up a Jack Torrance who did not seem a little bit crazy from the get go. After this version--I'm watching that miniseries today--I'm not so sure that I long for it as much.

The miniseries has its problems, of course. Spending time on so much detail is the purview of novels, not movies. The miniseries is a a good in-between sort of beast, but I'm not the sure the pressure cooker setup of The Shining fits the format. (To be fair, I've only ever watched this miniseries once, as it aired in 1997.)

As it starts, I'm a little bothered by starting in the boiler room. It's good to include the boiler in more than one passing shot (with Wendy rather than Jack, no less), as it was in Kubrick's version, but starting in the darker underground space sets this up as something generic, a "haunted house" story that is not going to offer anything unique. King's novel is not generic. He offers--as he calls it while complaining that Kubrick didn't understand the concept--an inhuman evil in the form of a hotel. Jack Torrance is a troubled man corrupted by the hotel, not freed by it (which is how Kubrick's version plays). King, in The Shining, also in Christine and I'm sure some other story I'm forgetting at the moment, offers not a place haunted by the dead but a place that wants the dead, latches onto them for its own nefarious purposes. Danny Torrance is good fuel for the Overlook.

But, I was talking about the opening. It starts in the dark and then moves outside, and it feels more comfortable with the dark. Yet, it is in the daylight that the inevitable conclusion the story is set up. Ullman doesn't like Jack and Jack's alcoholism is going to be even more important here, it seems, than in Kubrick's version. As is appropriate, since it comes from the novel, and from King's own experience, but the duel setup of the boiler explication and the conversation about alcoholism is a little too on-the-nose. And, minutes later, we're offered a flashback to the time Jack hurt Danny. (And, we've already had a flashback to the woman in Room 217 killing herself; this film wants to show us everything that it can, which shouldn't be a bad thing.)

Jack here (Steven Weber) comes across a little... cold? Not the manic-bordering-on-insane Jack (Jack Nicholson) of Kubrick's version, but not the warm father I remember from the novel, either. Wendy (Rebecca De Mornay) seems more personable, less frail right away; she doesn't trust Jack's sobriety, but she also feels a little more like a construct; Kubrick's Wendy (Shelley Duvall) is frail but believable; her wariness plays as more real.

Tony (Wil Horneff) is just wrong. Floating teenager is silly, not creepy, and the film is hard-pressed to introduce horror through the guise of him. 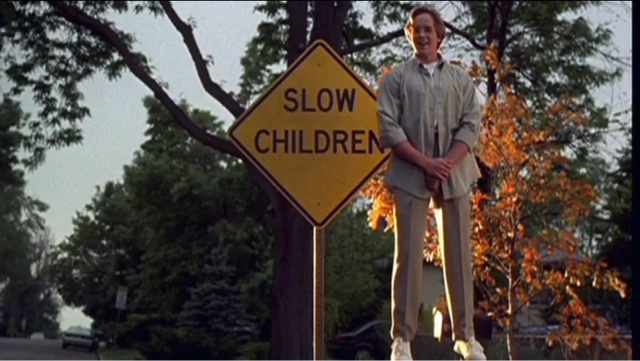 My other complaint before I try to just settle in and watch for a while: I like that the axe will be replaced by the mallet from the novel, but do not like that they didn't just go with it being a Roque mallet; no, it has to be the oversized "Denver Croquet" mallet because the horror of a family-friendly game piece being transformed into a weapon can't outweigh the ability of movies to make whatever possible over-the-top; a mallet cannot be visually scary unless it's huge--so says the movie producer (or did that come from King's own adaptation of his book?)

(I cannot remember how old Danny is in the book, but Courtland Mead (age 10) looks like a fool asking his parents what signs say. Later, Wendy says he's seven, but even that seems too old for his inability to read.)

Kubrick is a very cold man--pragmaatic and rational--and he had great difficulty conceiving, even academically, of a supernatural world... a visceral skeptic such as Kubrick just couldn't grasp the sheer inhuman evil of the Overlook Hotel. So he looked, instead, for evil in the characters, and made the film into a domestic tragedy with only vaguely supernatural overtones.

Now, I love King's books (or I used to). I like King himself, but here we get into that Room 237 territory in that I think King is absolutely wrong about what The Shining is. The Shining is a domestic tragedy with, well, not vaguely supernatural overtones. But, it is a domestic tragedy primarily. Tasha Robinson at The Dissolve suggests that King's own struggle with alcoholism left him with a "personal, autobiographical identification with the material" of The Shining and that made him "intolerant of any changes that interfered with his story." I'm reminded of that moment in Stories We Tell when Harry insists that only he can tell the story at hand, when his version of the story doesn't actually differ from the one given. There's a personal attachment that isn't so much about the fundamental truth of the story, so much as some sense of ownership. Aside from Jack feeling a little too close to the edge of insanity in Kubrick's version, I don't think that version of the film betrays any of the themes of King's version. The boiler is nearly absent, the wasp's nest is gone, Jack's play is transformed into the very memorable novel consisting of just one line over and over and over, but the heart of the story is still there. And, boiled down to a little over two ours (about half the length of this version), that heart can beat with real energy. Even in its quiet moments. Here, the quiet moments border on tedious.

In retrospect, it is probably for the best that the wasp's nest and the boiler are gone. Between those two and Jack's alcoholism, the novel relies a bit excessively on metaphorical powder kegs waiting to explode. What is really missing from Kubrick's version is the obsession over the old files and records from the hotel and how Jack is piecing together his play from, essentially, ghosts.

That director Mick Garris thinks--I'm guessing--the topiary lion looming large in the foreground over the hotel is as foreboding as, say, Cujo looming over the car in the film version of that King novel is laughable. It's just a plant. It only becomes scary when it stops being a plant (which I think is at the end of part two).

The staging going into the brief flashback to the oldtime party (after Jack finds the memory book) rings false to me--this is middle-of-nowhere Colorado. No one should be being dropped off for the party by car. They should be staying at the hotel in order to attend.

Danny's version of checkers is interesting, considering one of those Room 237 theories--he's using green army men for one side and plastic Indians for the other.

Part Two is not particularly interesting but it works far better than Part One. It's not all a bunch of extended setup. Stuff actually happens.

Topiary CGi kinda sucks and that cliffhanger resolves too easily.

Jack: What are you doing, Doc?

Danny: Being somebody else so it won't bother me. When she yells. Or you push. Being someone else sometimes--that's better.

--considering that most of Courtland Mead's line readings so far have played a little comical.

I remember the wind-up clock moment in the book being amazing, some of King's best writing of tension with almost nothing actually happening. I barely remember the details, but I remember the clock and reading the book in the middle of the night... using a flashlight I made myself. Here, the scene cuts to a sort of flashforward as Danny envisions Jack looking quite possessed and carrying that "Denver Croquet" Mallet.

The guy wth the dog mask--Rover (?)--works pretty well, but Danny's response to sort of run away screaming then just stop plays a little silly.

You could sustain the climax of this story for an hour, but this version doesn't do it. Jack's pursuit of his wife is getting a little monotonous.

(Nitpick: Hallorann works at the Overlook half the year and has been doing so for a while. Why did he just stop to check out a sign to the Overlook Hotel like he didn't know a) where he was and b) what was on that sign? I mean, aside from lazy scripting/editing purposes to let us know he's close.)

Dragging out Jack's turn to the dark side makes him less scary. Maybe a better stand-in for his alcoholism, though. It isn't just quick, in and out and you're over. Drunk Jack lingers. He'll hurt you one moment, maybe physically, maybe verbally, then he'll wander off after something else. But, you never know when he'll come back. In reality, this has got to be awful--the stress of living with an alcoholic or drug addict. In that reality, it can be the waiting that is the worst part. When the attack comes, at least you know where you are, you know when you are. The waiting is over.

Though Weber's Jack breaks a whole lot of stuff and yells quite a lot, Nicholson's Jack is more overtly scary, more dangerous. His rage continues beyond his own energy to sustain it. Weber's Jack, on the other hand, has that moment of weakness, something more like an alcoholic, feeling the guilt at realizing what he's done, what he's doing.

That is the key difference between the two film versions of The Shining--one has a father losing his mind because... well, he just kind of does. One has a father losing his mind because he's an alcoholic. Nicholson is stronger, sooner to anger. Weber's acts out of weakness. Some film version that managed a bit of both versions would be nice. But, I don't imagine a third version will ever be made.