is there someone inside you?

For some reason, every time I watch The Exorcist, I forget that it starts with that sequence at the excavation in Iraq. Of course, the movie is not called The Possessed (though I am pretty sure that I have seen more than one movie with that title); it is not about Regan (Linda Blair) but about Father Merrin (Max von Sydow) and, even moreso, Father Karras (Jason Miller). Something Clover (1992) tries to explain "this gendered division of narrative labor--to understand what it is about the male crisis that needs harnessing to a narrative of female hysteria or indeed psychosis" (p. 70). While Regan's story drives the narrative, the narrative belongs to those two men (and primarily Karras). Man versus the devil. The girl is just their battleground. 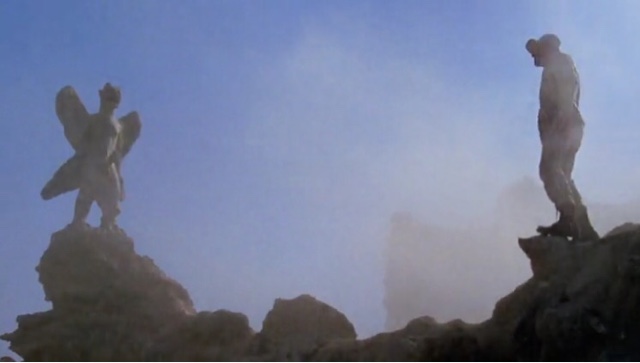 But, what kind of battleground is she?

Kinder and Houston (1987) write about the "psychological interpretation" presented in the film to explain Regan's initial extraordinary behaviour--her parents' divorce and rejection by her father (he didn't call her on her birthday), Regan's jealousy of her mother's director (Regan's mother, Chris (Ellen Burstyn) is an actress, in case you are reading this and, for some strange reason, have never seen the film), "her forthcoming thirteenth birthday [and] unusual physical contact between mother and daughter" (p. 47). I assume they mean the wrestling, or Regan sleeping in her mother's bed, but I think it's odd to call either of those things unusual. I also question whether or not Regan is jealous of her mother's relationship with her director Burke (Jack MacGowran); Regan seemed genuine when she suggested her mother could bring him along on their sightseeing venture on her birthday. But, Regan's age is certainly an important detail (especially considering an interview I saw once in which Linda Blair insisted that she had no idea what Regan was supposed to be doing in the scene with the crucifix). She's in the process, as it were, of becoming a woman. 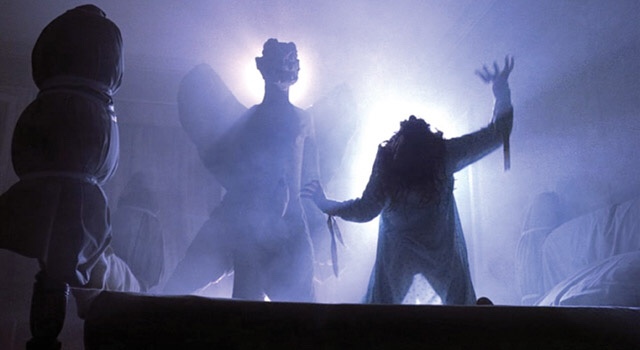 Meanwhile, though, Damian Karras is dealing with a crisis of faith. But, consider the year--Vietnam in full swing, sexual revolution in just as full swing. Early in the film we see Karras boxing and I cannot help but link up his crisis of faith with a crisis of manhood--the same crisis of masculinity central to my discussion of 1980s action movies back in January--for example, on Day 538 - the mind is the best weapon about Rambo. The Exorcist adds in the same crisis of Catholicism that came with Vatican II that ties into The Omen or Rosemary's Baby. A crisis of Catholicism (and Christianity more generally), a crisis of American Hegemony and masculinity, a crisis of the sexual revolution and what it might mean for a girl like Regan coming of age--and all of this gets focused in on this one little girl, and an old man and a weak man are all that stands between this "demon" and the world.

So, to reiterate, this is not Regan's story. Clover says, "Regan's story is finally significant only insofar as it affects the lives of others" (p. 87). But, what really matters is that this story is not just about affecting the lives of the other characters, Chris and Merrin and Karras. I think we forget how powerful this film was in 1973 compared to watching it today. I mean, it's still one of the greatest horror films, but I do not think that we feel the impact of it as much. For example, in his original review of the film, Roger Ebert writes:

Rarely do movies affect us so deeply... [W]e're not escaping from Friedkin's implications, we're shrinking back from the direct emotional experience he's attacking us with. The movie doesn't rest on the screen; it's a frontal assault." We might forget that The Exorcist is "a triumph of special effects," as Roger argues. We are used to special effects, used to believable visuals that draw us in and make everything seem quite real. Roger writes, "Never for a moment--not when the little girl is possessed by the most disgusting of spirits, not when the bed is banging and the furniture flying and the vomit is welling out--are we less than convinced." (Note: the theatrical version did not include the spiderwalk scene, a moment I think detracts from the rest of the effects.). Roger continues: "The film contains brutal shocks, almost indescribable obscenities. That it received an R rating and not the X is stupefying." See, I've been watching movies like this for a few decades now, plus I'm not much for religion, and I've been known to use profanity in my classroom, so admittedly, this film does not shock me. But, I grew up going to church and I see people still flinch at profanity and obscenity today, so objectively I can see that something is (or should be) shocking. The absolute way that Chris insists that her daughter never uses profanity, for example--that is rather... well, not shocking but different from today. Today, I would be surprised if a twelve-year-old girl didn't use obscenities from time to time.

And, there are those who find that last detail depressing and/or horrifying, still.

But, I was talking about how Regan's story affects not just the lives of these other fictional characters but the rest of us. Roger says--and it surprises me from a guy who obviously loved movies--"I am not sure exactly what reasons will have for seeing this movie; surely enjoyment won't be one, because what we get here aren't the delicious chills of a Vincent Price thriller, but raw and painful experience." And, he asks, "Are people so numb they need movies of this intensity in order to feel anything at all? It's hard to say." I actually quoted an article by Ebert in my published piece on the sexual revolution; he edited the Champaign Spectator around the time Professor Leo F. Koch made headlines for allegedly promoting premarital sex in that paper. He should have understood that, yes, people needed such intensity in order to feel something. At least, some people would have. Footage from the Vietnam War was on the news regularly. Riot footage as well. The country was--just like the most conservative among us fear pretty much for a long time before and every day since--going to hell, the New Left tearing at its seams and digging into its cracks. I'm sure it was mindnumbing, just as so much on the news can be today.

And, that last line is the kind of evidence I would mark on a student's essay for vagueness. But, consider: war still in Afghanistan, the conflict left over after war in Iraq, mass shootings, the cop killings that (however you view the reasons) gave us the Black Lives Matter movement, ISIS, Al Qaeda, and the list could go on and on. I don't know the current statistics, but I'm guessing most of us don't watch the news anymore. Not on a regular basis, anyway. It's too much. I figure, for some of us at least, we watch the more graphic horror films, the so-called "torture porn" for example, because of something like cutting--subjecting ourselves to this imagery, to horrible violence and gore, but knowing quite absolutely that it is just special effects, works as a vent for some of the stress, some of the pain, the anger, the fear, the knowledge that horrible things happen around the world every day and we are (mostly) powerless to do anything about it. Consider that line I quoted from Clive Barker the other day about the monsters you cannot destroy, that you just have to figure out how to live with, instead. Then come forward to a recent standout horror film like It Follows, in which the horror cannot be reasoned with and will never stop coming (like a Terminator, only less crushable by machinery). That film is about learning to live with something awful, not about defeating it.

In the film, Regan's story costs three men their lives. The question for tomorrow: what does it cost us? 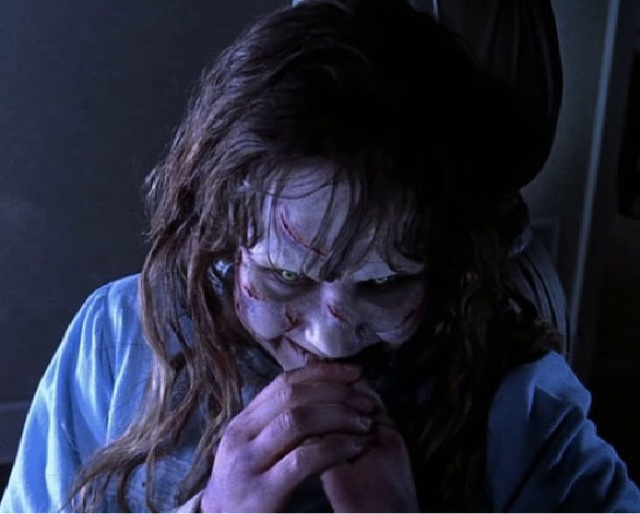