i never want to see or hear from you again

Skipping the rest of the sequels, wary of decreasing quality and inspiration.

Moving on to the remake... because I'm still a glutton for punishment.

Yay, misquoting (quoting some odd translation I can't find through google, anyway) scripture right away. Skipping details, too. This is definitely an Omen film. The various interpretations of the signs are a stretch, as per usual.

And, I don't like the opening of this film as compared to the original. Lame end-of-the-world stuff at the Vatican, cut to Robert Thorn (Liev Schreiber) on his way to the hospital, rushed. The original was so simple and bleak, its opening line--"The child is dead"--said without much emotion. Thorn explains that the child was everything to his wife, which is a rather pointless thing to say. Like we were figuring, Oh, she probably didn't want the kid anyway, everything is fine. Emotion is nice but there was something interesting about Gregory Peck's Robert Thorn, picking to replace his dead child with another and not breaking down. Schreiber seems to be playing for both--stoic and emotional, and that isn't as interesting in context.

(Nitpick: Katie (Julia Stiles) looks way too good for a woman who just had a hard labor that (supposedly) cost her the ability to have another child and (maybe) killed the baby as well. Too clean, too well rested.)

Why make Robert just the deputy to the ambassador? Did someone see how the Omen films romanticized the role of the ambassador and thought that was too much? ...ah, to add one more death. Final Destination style as well. And, though I'm guessing the director (or writer) thought it was clever to show someone's watch at 6:06:06, the timing is kind of silly since they show that and then a few seconds pass as fuel gets dumped on the ambassador and then fire. If you're going to be clever, be precise about it. Have him die at 6:06:06, or have the first domino in the Final Destination chain leading to his death happen at 6:06:06. Or, you know, stop trying to be clever.

That entire sequence also just sets up more emoting for Robert, and unnecessary complications to the story. Complications that don't really add anything.

Damien's disappearance plays differently, setting up Katie as a) a bad mother or b) an overbearing mother who worries too much. In the original, it was both parents out with Damien and it was almost cute how they were so into their conversation as to not notice Damien was left behind. Here, Damien has disappeared on purpose, to scare his mom, which plays as both cute and, you know, SPOILER, knowing he's the antichrist, it's a little on-the-nose evil.

Counter that with Robert running and grabbing Damien after the nanny kills herself as his birthday party, and one might think this movie doesn't trust mothers. Clover (1992) talks about how The Omen (the original, mind you) is an exception among occult horror films in focusing on the male figure. The Exorcist, Rosemary's Baby, Poltergeist--these films focus on the mother. Though The Exorcist does, of course, turn its focus to the male priests, the plot circles around Regan and her possession. The female serves as a portal to the supernatural.

(And, Robert just implied that Katie and Damien don't bond.)

In the story of The Omen, of course--the original and this remake--Katherine effectively failed at being a mother in bearing a dead child.*

The brief confrontation with Mrs. Baylock (Mia Farrow--awesome casting choice) about Damien going to the wedding plays a little differently here than in the original. Mrs. Baylock--if we don't assume she's as evil as she's going to turn out to be--is expressing genuine concern here for Damien's health. She doesn't say the line about how he shouldn't go to church because he won't understand what's going on. So, Katie's insistence that Baylock get Damien dressed and ready to go fuels the notion that Katie is not a good mother and Baylock--though evil--is.

Damien (Seamus Davey-Fitzpatrick) isn't great at looking like anything is wrong as they approach the church. Katie, and then Robert, just seems to be overreacting to nothing, or the power of suggestion. Then, he does freak out and attack her as in the original. But, kid staring at church doesn't really play as something being wrong.

No subtlety in Katie's dreaming about Damien in a wooden mask and Damien holding a noose. Considering the details I've already pointed out implying Katie is a bad mother, you'd think they would have stuck to the same setup as the original, Katie's problems with Damien framed as any mother's annoyance at an overactive and noisy child. 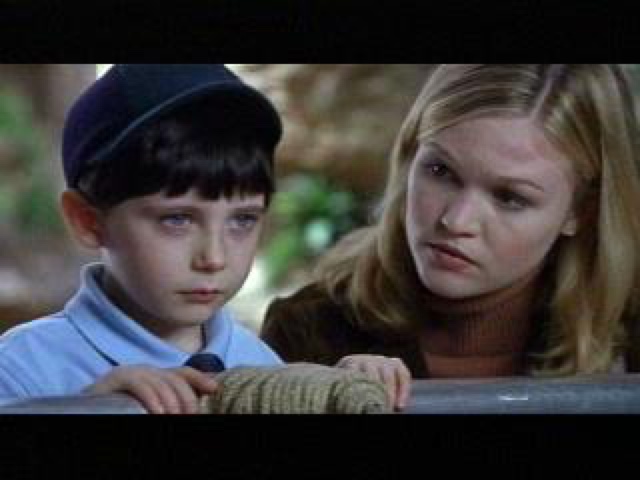 Clover argues that the occult film "is the most 'female' of horror genres, telling as it regularly does tales of women or girls in the grip of the supernatural. But behind the female 'cover' is always the story of a man in crisis, and that crisis is what the occult film... is about" (p. 65). This film seems to attempt to counter that by leaving Robert out of the disappearance scene and giving Katie an extra moment before the monkey/ape scene talking to two of her friends.

The red balloon is a bit too... Shyamalan.

Soccer game is replaced by an outing to the opera Salome. No imagery from the opera itself, but the name alone invokes a dangerous woman.

The addition of glass to the death of Father Brennan (Pete Postlethwaite), especially the circle around him, is a bit much.

And, we still get the scene of Katie being annoying with Damien's noise. Robert arrives before Mrs. Baylock--was he there for this in the original? Only three days ago, and I can't remember. It frames him as the good parent, saying Damien is just playing quietly, while Katie can't handle the noise. Then, Robert goes to see Katie's therapist--new scene to bring the focus back to Robert a little early.

No hint of it being accidental, Damien hurting his mother. Baylock and Damien ominously look at his scooter before he takes it out about the house (having to make several turns before he gets to his mother); the hint of accident though we know it's deliberate, made the sequence in the original more... again, I've got to go with interesting. Katie's two floors up because, remake has to one up the original.

Jennings (David Thewlis) says that every inch of Father Brennan's walls are covered (which they were in the original) but they clearly are not. In fact, I think the ragged, yellow-lit apartment makes Brennan seem more insane (plus, you know, his diary showing he had been stalking Robert) than prepared. His apartment in the original seemed more like a stronghold that makes sense at this point in the story because we know Brennan is right and Robert is leaning toward knowing it as well. Here, though, this set reminds me of John Doe's apartment in SE7EN.

Insert image of me shocked. Jennings actually acknowledges that Brennan's poem is not from the Bible at all.

This film doesn't trust daylight. In the original, so many scenes happened during the day--Robert meeting with Brennan, Jennings and Robert finding Damien's real mother's grave (happening now)... Here, it's more often night, with a blue shift in the image. Except for Damien's birthday party, if it's daytime, it's cloudy.

* The baby's skeleton with the hole in its skull, of course, implies that Katie may not have failed at all at being a mother.

Jennings' death is less dramatic but works better in this updated version. The bit with the dog and the trapdoor in the (really large... seriously, puts that pantry in The Shining to shame) kitchen pantry was unnecessary. I guess we need Robert to be clever so we know he's the hero now. (As if we expected anyone else to be it.)

Damien screaming as his father takes him to church is a bit much, and Damien's final attempt to stop him seems fake. In the original, that moment worked so well, because Damien is just quiet the entire time and then genuinely comes across as a child finally when he asks his father to stop.