the things that we don't want to look at

Drifting away from the horror film itself for the moment. Room 237 is on instead of a second day with The Shining because I think it's important to understand why we do this. Why I do this. Why you read this, for that matter. These movies--they're just movies. We don't really need all the subtext to enjoy them. I would never argue that there is no subtext; in fact, I think there is always subtext.

For example, maybe it's about the Tang cans or the Golden Rey boxes over the Calumet cans. Picking one detail out of many says more about you (me) than it does about the film.

Why am I doing this?

Chuck Klosterman, reviewing Room 237 for Grantland, says, "It introduces a new way to experience and consider movies." I'm trying to remember when I started thinking about movies in terms of meaning rather than just taking them at face value. When I was at USC maybe, taking film classes. But, maybe before that. I mean, the montage of Rocky and Drago training in Rocky IV--there's some obvious juxtaposition of the cold technology of Russia and the rugged nature of America (as if we had not embraced technology long before), and it was all a jingoistic celebration (though I wouldn't learn the word jingoistic until sometime in the 90s when I read a TV Guide description of Red Dawn). The 1980s were full of pro-America, pro-violence movies. And, I loved them. I grew up on those things. I felt that stuff even if I didn't consciously notice it.

Klosterman cites a new style of criticism that "suggests every art object should be viewed as an autonomous creation that can be interpreted without having to consider the artist's intent or the audience reaction (in other words, the critic creates the meaning from a close reading of the text's technical components)." On the one hand, obviously, I have no problem with that. I do it all the time in this blog. As long as the author's intentions are one element you look at. I've written things that took turns I didn't expect. I've injected themes and then found other, unintended themes in the final product. Stories take on a life of their own.

Did Kubrick do... something with The Shining beyond the surface? Yeah, probably. The inclusion of the hedge maze instead of the topiary animals invokes a complexity that is evident in the hallways of his Overlook Hotel set, hallways that don't quite work right, windows and doors that shouldn't be where they are... But--and I have made plenty of questionable arguments about some movies--Buzz Lightyear as Christ-Figure, for example--there comes a point where you can take it too far. Not in theorizing about meaning, but in assuming that you are right. Treating your notions as definitive--that is the mistake. You may see significance to one particular brand on the pantry shelf; that doesn't mean there is one. You may see a minotaur in a skier's silhouette; that doesn't mean there is one. Mark Jacobsen, writing for Vulture, talks about "the nature of obsession, the compulsion that causes the otherwise rational mind to charge into the labyrinth, to wrestle the obfuscating Minotaur within, and extract from the bull-man whatever morsel of meaning can be salvaged in this dumbed, flat world of ours." As I said yesterday, we want depth even when it isn't there. We want meaning beyond the obvious. When it comes to films, especially when we put them on repeat, we need to see something new sometimes, because how else can we deal with it? Like life itself--we don't want each day to be exactly the same. We want some elements to remain stable, but we can bore so easily if nothing ever changes. Klosterman coins the term "Immersion Criticism" for this response to the repetition. He writes:

[I]t can't really be done unless you watch a movie 10 or 100 or 1,000 times. It's based on the belief that symbolic, ancillary details inside a film are infinitely more important than the surface dialogue or the superficial narrative. And it's not just a matter of noticing things other people miss, because that can be done by anyone who's perceptive; it's a matter of noticing things that the director included to indicate his true, undisclosed intention. In other words, it's not an interpretive reading--it's an inflexible, clandestine reality that matters way more than anything else. And it's usually insane. 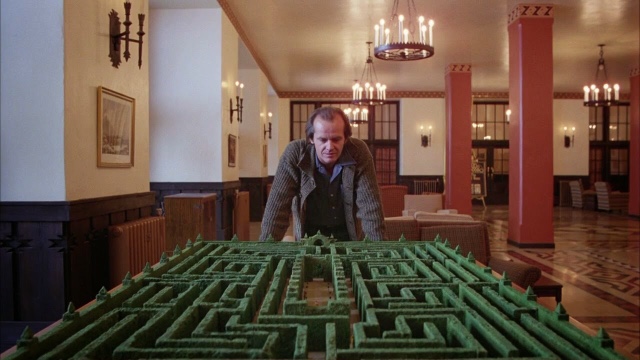 As for the film itself--Room 237, that is--I must state for the record that I don't like it. It's details are fascinating, but I think the documentary, in lacking any commentary, gives too much weight to the theories within. I would love to see a documentary about the people behind these theories. Bill Blakemore--the guy who thinks the film is about the genocide of Native Americans--for example, worked for ABC News. Kevin McLeod, Mstrmnd who declined to be in the film, is a video game designer. What puts these two men into this same field--dissecting The Shining? What puts me there with them? What puts you, reading this, in (or at the edge of) that same field? I'm reminded of the documentary Stone Reader, in which a man seeks out the author of an obscure novel he things is a masterpiece. Things that are important latch themselves onto us. Things that latch themselves onto us become important. The Shining doesn't have to have any hidden themes. It can all be taken at face value. Or it can be taken however we need to take it at any given time. As John Fell--the guy who superimposed the forward The Shining over the backward The Shining, says in Room 237 (minus a few you knows and a couple likes), "Once you start to study synchronicity and symbolism, suddenly you notice in your own life, things start popping out. Things you hadn't noticed before. Like your point of view is being altered by your study." That, in a nutshell, is one of the arguments essential to the Master's Thesis I'm working on. It's part and parcel of this blog and my year with Groundhog Day. I am (and you are) Schrodinger's audience member, changed by the viewing. But, the film is also changed by my (your) viewing. It takes on the noise of my (your) life. I (you) infuse it with my (your) beliefs and presumptions. As Benesh (2011) writes:

...an imprint remains as during the film the audience members "introject" or take in its psychic content including symbols, images, and narrative, as well as projecting individual personal concerns. After the film, if it is particularly "resonant," the process continues as the film "plays on" in the viewer's mind. A personal "edition" of the film is thus created and is assimilated into the psyche of the viewer. (p. 8)

That will not, of course, stop me from trying to a) interpret a given film and b) force that interpretation upon you by writing it in this blog.

Jacobsen, M. (2013, March 17). 'I know what The Shining is really about': Inside the crowded cult at the Overlook Hotel. Vulture. Retrieved from http://www.vulture.com/2013/03/the-shining-cult-at-the-overlook-hotel.html

Klosterman, C. (2013, March 29). What's behind Room 237? The Shining, Immersion Criticism, and what might be the documentary of the year. Grantland. Retrieved from http://grantland.com/features/documentary-year/