in every apartment house

Some of the best horror deals in very down-to-earth details, mundane themes with a twist toward something extraordinary. Rosemary's Baby--today's film--deals in fears about pregnancy and parenthood. The Shining deals in alcoholism and... parenthood. Poltergeist deals in suburbia and... parenthood. I'm sensing a theme. The Omen films also deal with parenthood, and of course, the end of the world (because children are, in a way, the end of the world... Ask any single person.) Ghost stories like Crimson Peak deal in hidden pasts coming back to haunt the present (and that one has almost nothing to do with parenthood). Even the Hellraiser films deal in a sort of fear of the perverse and our own sexual impulses. (And, there's that thing about motherhood.)

And, that's just movies I've watched this past month for this blog. How about some more recent fare? It Follows, for example, takes old slasher-film themes about the dangers of casual sex and updates them with a STD-metaphor. The Babadook deals with parenthood and raising a troubled (and troubling) child. And it's not that horror needs the mundane to focus it. Or that the mundane needs horror to focus it. Though, both of those things are true enough. 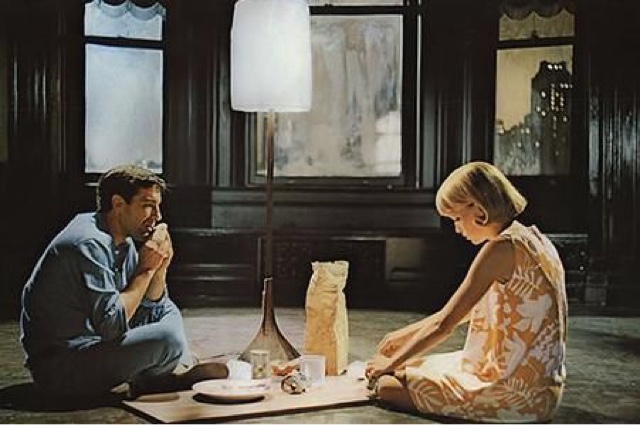 What it is, it seems to me, is that the two things are part and parcel of the same thing. There is no mundane without some inherent fears creeping in, and no inherent fears without the mundane surrounding it. I mean, sure, big Omen-style end-of-the-world stuff is scary, but what is scarier? A young boy surrounded by death. A cult of believers willing to act upon that end-of-the-world stuff. What's scarier than a stepmother with whom you don't get along? A stepmother who murders men because the sex she's been having with your father isn't satisfying enough. Hell, the idea that your stepmother has sex at all.

Whether the locale is a summer camp, an isolated highway, a new house, the woods, or your dreams, it is the intrusion of the horrific upon the absolutely normal that frightens us. Too much of the horrific or the supernatural and the effect is not as powerful--take Crimson Peak, for example.

Just now, for instance--Rosemary (Mia Farrow) and Guy (John Cassavetes) had dinner with Roman (Sidney Blackmer) and Minnie Castavet (Ruth Gordon) and the conversation turned to the Pope visiting New York and none of these people is religious... (well, that isn't quite true, is it? But, SPOILERS.) Rosemary was raised Catholic but isn't anymore. And, I think about when this film came out--1968. Vatican II worried Catholics about the state of their church, and of the world. The sexual revolution, not to mention political revolutions around the globe--especially in '68--worried an older generation about the younger, and here are two generations sitting down together. Subtract the Satan stuff to come and there is still a fascinating thing going on here. Rosemary and Guy are young, seemingly happy--though her line(s) about how Guy "was in Luthor and Nobody Loves an Albatross and he does a lot of TV" seem just a little too rehearsed, repeated almost word-for-word to different people, and I wonder if we're not supposed to think there's something a little off about their relationship.

And, as I type that, they're fighting about the chocolate mousse that Minnie dropped off.

The fight doesn't last, of course. Because, well, they are young and in love, and we only need an inkling of cracks in the veneer to start getting a little fearful. The horror doesn't need to intrude too much. This is 1968. There are cracks in the nightly news all the time--the Tet Offensive, the assassination of Martin Luther King, Jr., the assassination of Robert Kennedy just days before Rosemary's Baby was in theaters, rioting in multiple cities, including Chicago where mor riots would come in August. Vietnam. And, what are people afraid of? Hippies and free-love adherents because they're outside the norm.

I imagine that conservative folks figured scenes like Rosemary's dream rape were going on at communes all across America. May 1967, the New York Times called college students "casualties of the sexual revolution" and, with little direct evidence, correlated casual sex to mental health problems among those students." The Packard survey found that, in 1968, 57% of college males (30% with more than two partners) and 43% of college females (14% with more than one partner) had engaged in sexual intercourse. So, an older generation, pretending that they had not engaged in premarital sex, might be horrified by all of these mentally ill sexual deviants. See, it doesn't matter where Rosemary's baby comes from. Just look at her. Farrow was in her early 20s here but looks younger. And, those 60s minidresses echo the dresses of little girls from the 1950s. This is not about the devil impregnating a young woman. This is about that young woman being corrupted.

And, nice timing again, she just got her hair cut off. Meanwhile, Guy's a stage actor--hardly a real job. (Plus, he just called her haircut "awful" and "the worst mistake you ever made." He's kind of a dick.)

Scott Poole, a professor who "teaches courses on Satan and modernity and monsters--as well as religion" at College of Charleston, interviewed by Mary Valle at Religion Dispatches, 14 May 2012, says:

I think that [director Roman] Polanski really played a fairly elaborate joke with [Rosemary's Baby].[Author Ira] Levin had borrowed the trope of the satanic conspiracy that has old roots in Western culture and used it to create a fairly obvious social parable.

He had been asked about a quotation in his book Satan in America, Darryl Jones [the original source for which I cannot find] arguing that "Rosemary's Baby is a film about men controlling women's bodies." Many a horror film relies on a conservative world view to anchor the horror. Poltergeist may have ex-hippies who smoke weed as the parents, but they live in the suburbs, he works and she stays home. The Shining isolates the family unit and dissects it, as does The Omen and Hellraiser in different ways. Poole sides with me, by the way, saying, "Rosemary's Baby may be largely about the efforts of men to constrain women to home and family, but it's part of a landslide of horror films that expressed a lot of anxiety about motherhood and childbearing in the wake of the sexual revolution(s)." He compares the film to It Lives and The Brood but suggests these films are not strictly "about women and men's psychological angst about childbearing [but] structural changes in American society." He adds:

What you had in the '60s, '70s, and '80s was a sea change in gender roles and sex lives that stretched back to the '20s. Let me add that I think that in the post-World War II era, a male-controlled culture seeking to represent the white middle class mom as both constrained and utterly capable, virginal, and fertile, and demure yet available, created an enormous amount of social anxiety about gender that these films made fun of.

Rosemary Woodhouse may be married, but she represents a new generation of women who can have parties like this one on screen now, with pseudo-counterculture folks, dressed like beat poets and hippies but drinking away in a highrise New York apartment.

Rosemary just admitted to three women, isolated from the party, about how much pain she is in. And, it's like the point boiled down to one scene--they tell her to see a different doctor, to make decisions of herself. As we still debate today, after all, it's her body, her decision. She specifically says, though, "I won't have an abortion." But, as one of them points out, "Nobody's telling you to." A scene later, she feels the baby kicking and pulls Guy's hand to her stomach and he seems horrified.

After all, there is a giant parasite growing inside of her...

But, that will have to wait until tomorrow (even though there's close to an hour left of the film).