dreams and imaginations to help us escape

Today, I watched Mudbound. Today I watched Columbus. Right now, I'm watching Brigsby Bear for the second time. I avoided doing any teaching work--it's technically finals week, but my classes' final speeches/debates were finished last week. I stayed home, watched some TV, those movies, and had leftover chili for dinner that I made yesterday. It was a mostly relaxing day. There was also talk of the special election in Alabama. I won't get into the details on that. It didn't go how I thought it would go, and that's a good thing.

Instead, movies. These three. All of them, ever. Movies. 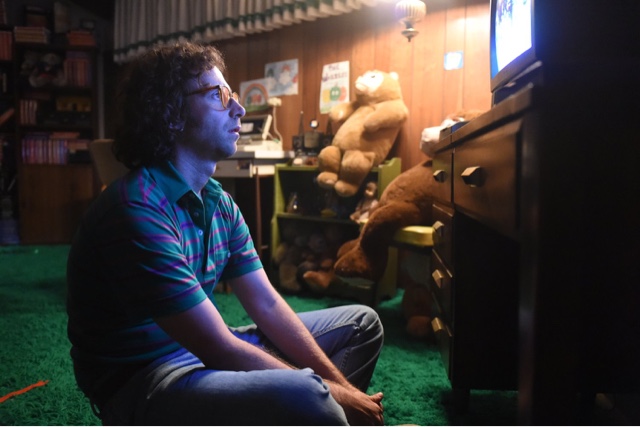 Take Brigsby Bear, for example. It's a really dark concept that twists its way into a surprisingly optimistic, upbeat story. Guy who has been held captive his whole life, who has had one tv show to watch, produced by his abductor father, and out in the real world, all he wants is to have more of that show. Because, the fantasy that was central to the only reality he knows is the only reality he wants.

(And how many times, when your favorite show was canceled out of nowhere, did you want someone, anyone (maybe even you) to keep making it?)

Or Columbus, the main characters of which are a man waiting (somewhat impatiently) for his hospitalized father to die and a young woman biding her time in her hometown because she thinks her mother would be lost without her. It's a slow film, deliberately slow, because it's about waiting. About being lost.

Then, there's Mudbound, about two poor families, one white, one black; about race relations (if you can call them that) in the 1940s, about America and its divides... Which is unfortunately topical today.

I could also have moved along to the next movie on my childhood deconstruction list, move along from 1980 to 1981... Three things: 1) it's awards season, critics associations choosing their favorites for the year, big awards shows announcing their nominees, and the few movies I haven't gotten to yet on those lists I will be getting to soon; those movies will interrupt the flow here. It is inevitable. 2) That list--a file I've got called "movie life"--has movies on it all the way to 1992, just before Groundhog Day, the movie that started this blog. In the shortened list that started this "month" of childhood movies a few months back, I cut the list off at Stand by Me in 1986

(which is sort of a cheat, because that wasn't a movie I watched a lot as a kid. I was 10 when it came out, and I didn't really watch it often until I was in my late teens or early 20s. The first film for 1981 is a similar cheat. A big deal for me in 1981 when I saw it in the theater... though I'm not entirely sure I did see it in the theater. I might have only seen it for the first time on some Sunday afternoon on tv. But, it was one of the first VHS tapes I bought for myself, and it shaped the way I look at action films forever after that

(which is the point really. I mean, why go backward and look at all these old movies I've seen so many times except to see how they shaped the way that I look at the world and the way I look at movies? Just because I didn't have the opportunity to watch a certain movie over and over when I was young--because I didn't yet have my own TV or my own VCR or whatever--that does not mean the film did not embed itself in my head)

and while I might not have gotten to watch it repeatedly until later, it still left an impression.)

but 3) I'm not even sure if I'll get to 1986. While I revived this blog this past April (after 365 days away) recent uptick in views (and a recent uptick in subscribers to my YouTube channel even though I haven't added anything in a while) makes we want to do something else. Again. Part of the reason I stopped before was to do my YouTube reviews. I'd also considered doing a podcast but never found someone to do it with me. On the one hand, I love being able to ramble every day about whatever (as long as it links back to the movie I'm watching), but I imagine going back to the YouTube schedule (I was doing 2-3 videos a week), or a weekly podcast and on the one hand, I want to use that to get into even more depth, but also to maybe find an even larger audience. Something closer to actual reviews would get more readers/viewers/listeners than this rambly, sometimes philosophical approach I do here. (Of course, if you've watched any of my YouTube reviews, you'd know that I kinda got rambly and philosophical there, too. In fact, my views on the original videos (since moved from the separate account to my own) was going up right as I was getting impatient with the pace, and right as I was getting better at editing the videos faster.

I could do this every day, forever. I could talk movies anytime. I can watch movies anytime. I've got a day free, like today, I watch three. And, I've watched more in a day before. But, life is quite busy sometimes, with teaching and kids, and friends. Life. A good life. Gonna be 42 in January and I still want to do new things. I'm looking back at childhood films like that's some far away, long ago, thing. But, I think that, when I'm watching a movie, when I'm in the dark movie theater and screen lights up, I will always be that kid. Every movie is a trip back in time, a trip forward, a trip sideways into other worlds and other lives, and then I come back to my own life with a better grasp, a better mood, and it is hard to be too negative about anything.

Even when the real world can suck. A lot.