reach out to the world of man

Got an old VHS playing tonight. The Legend of the Lone Ranger.

Cheap opening, but not an uncommon thing. Assume the audience will care about a family getting slaughtered, a kid crying.

Then, off to the Comanche village. And the spoken-word song narration gets going over a montage. Seems far too early for a montage.

As a kid, of course, I did not care one bit whether there should be a montage already. Natives throwing spears...

Ugh, then, big brother Dan shows up and the lead is crying again. I don't think we even know his name yet. And we get lots of quick cuts but it's not really another montage, exactly.

I see the name of the star and I swear that's not anyone's real name. Klinton Spilsbury. And, apparently, all of his lines were dubbed over by James Keach. So, I guess he wasn't very good.

I guess this is our lead as an adult--that whole opening could have been skipped or showed up as a flashback later--on a stagecoach ride. The spoken-word theme actually does get to some singing; that's good.

Meets some woman who gets on the coach and, of course, stumbles, and he catches her. Basic romantic comedy meet-cute. He gives up his seat so she can sit facing forward. They talk about the book. He still doesn't know her name. It's Amy (Juanin Clay), he learns after...

And, I just remembered seeing this movie. Front row at the Pacific Hastings Ranch, when it was still one big theater. And, my cousin threw up his popcorn. I was already quite familiar with westerns because my dad loved them. And, however badly this film is about to hold up, I loved it then. But anyway--

Bandits attack the stagecoach. John Reid (Spilsbury) climbs out to stop the horses after the driver is shot. Bandits have some nice masks, actually, a little bit scarecrow, but still with their hats on.

Scenes look okay, but there is some abrupt editing choices going on here. John arrives in town, asks about the bandits. Then, suddenly, he's off talking to his brother, Dan (John Bennett Perry), who seems upset that John came to Texas.

And, Dan has himself some political views. "In Texas," he proclaims, "robbers are outlaws. In Washington, robbers are elected." Seems President Grant (Jason Robards) is coming to Texas and Dan don't like him.

And, there's Cavendish--I forgot Christopher Lloyd played him. He executes some of his guys for... Something. I got distracted by some late dinner.

Then, John and Amy hook up in a nice classy, olden days way. Walk around for a bit and kiss once. 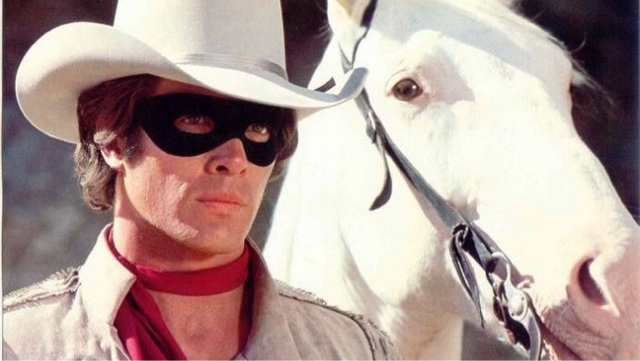 Apparently, there was some controversy at the time this movie was coming out; producers got an injunction against 65-year-old Clayton Moore, who had played the Lone Ranger way back when, so he could no longer appear at county fairs or hospitals in character. But, for those who were watching the movie anyway, another problem would be just how long it takes before John Reid becomes the Lone Ranger. I mean, he's not even a ranger, first of all. It's more than half an hour in that the rangers, including his brother Dan, are slaughtered. That's plot point one. And, I am pretty sure it is not until plot point two that John puts on the mask. Producer Lew Grade later wrote in his autobiography, "That mistake was not dispensing with the legend in ten minutes and getting on with the action much earlier on." This is a long, meandering origin story, when in 1981, the older audience would have wanted some western action and the younger audience would have wanted whatever action they could get.

The way Dan talks about something might happen to him and all that--it's a little too on-the-nose. Plus, we keep cutting to the empty cliff above, like they just rode into Texas Ranger Slaughter Canyon and we're all supposed to just know what's coming. Again, cheap. Expected, but cheap.

The Gatling gun here is a nice touch. Echoes of The Wild Bunch.

Nice violence. Some squibs, even, unlike older westerns. But, not much blood. Nice stuntwork. Good sequence overall. And, I guess that old folks who knew what had to happen to get to the whole lone ranger thing would have appreciated it. And, a kid like me, hungry for action, certainly appreciated it.

Tonto (Michael Horse) shows up, because... Actually, in modern nomenclature, there is some serious homoeroticism thing going on with this healing scene and I totally ship these two. I was going to comment on it with the "You will always be Kemosabe" goodbye earlier when they were kids, but it seemed wrong. Now, though, Tonto has John shirtless in a cave and the musical cue comes in and the image is a little glazed at the edges and it's like another love scene is about to happen. But, no. It's 1981. This is just men being men.

And, then some politics, with a line I remembered for years after, "The white man has made many promises to us. Yet they keep only one: they promised to take our land from us, and they took it."

It took me several of these narration beats to notice the lines are all rhyming couplets. It's is ridiculous, but in a good way. Especially because Merle Haggard takes them so seriously.

Useful note if you want to make yourself some silver bullets--not that I buy for a minute the notion that silver flies straighter--you don't have to make the entire cartridge out of silver. I mean, you make some basic cartridges, and just the bullet part out of silver, you can probably make a lot more.

We needed several minutes of John and Silver getting together, with slow motion closeups of the bucking horse.

And, I gotta wonder how many old folks in the audience were annoyed that Tonto can not only formulate complete sentences, but it is his agenda that really drives things. He trains John to shoot, he helps him capture and train Silver.

One hour in, we get the mask, we get "Hi-yo, Silver" and the William Tell Overture. It's about damn time.

Then, it's like a spy movie more than a western; John questions the guy who led the Rangers into Texas Ranger Slaughter Canyon, and someone shoots the guy from the shadows so John cannot get led to Cavendish.

The narration glosses over the obvious racism that would have the crowd wanting to hang Tonto, but then the Lone Ranger rescues him, the William Tell Overture plays again, and that sequence barely served a purpose.

The whole rescuing-the-president plotline feels more like a spy movie than a western. As is Cavendish's ransom plot.

I like this version of Grant, though. He sees his car has been separate from the rest of the train, he sees the small army waiting for him, and he just takes one more drink and walks out to meet them.

And he calls Cavendish a "diseased son of a bitch". And helps light the explosives.

Structurally, this is almost more like a pilot for a TV series than a movie. So much setup and barely any payoff.

But, five-year-old me loved every minute of it.