Talking with Fresh Air about Mad Max: Fury Road, director George Miller says "that a film's reception changes with time. 'First of all, people write about it in reviews and... [then] after a while The audience starts to tell you what your film is...'" I found this when looking for old interviews with Miller, get a better idea of his reasoning for making the original Mad Max or, more importantly, The Road Warrior.

But, in this deconstruction going on in this blog of late, that is not necessarily the point. I mean, in 1981, I am five years old. I don't rightly care why a film gets made. If the film entertains me, I am just glad that it got made at all. By '83, when Return of the Jedi comes out, I am buying... Or having my mother buy for me behind-the-scenes books and magazines. I learned about blue screen from a section about the Speeder Bikes. But, I suppose that I might write more about that when I get to Return of the Jedi.

What matters today is this movie--The Road Warrior--my understanding of it then (as I imagine/remember it now) and what I might have taken from it as a boy. While I mentioned yesterday in that long paranthetical that I left The Road Warrior out of my month of action films back in phase two of this blog, it is worth noting now that much of what makes The Road Warrior the film that it is (i.e. how it can be understood on the screen, not any of the behind-the-scenes stuff) can be matched up right alongside the likes of those films I did include--

--in the focus on the masculine hero, especially the damaged masculine hero. Martin Riggs, John McClane, John Matrix, John Rambo, Pete "Maverick" Mitchell, Max "The Road Warrior" Rockatansky. And, so many others from the 70s, 80s, 90s. The 00s. Today. Action films tend toward testosterone, toward the exercise of violence by men to get things done. And, for what? I mean, we often lean on the notion that human history is built on men warring with men, women sitting at home, gathering and birthing and gossiping. Men hunt. Sometimes, they hunt each other. It's just the natural order of things--how we tend to understand it--writ into various action plots on the big screen. Whether it is any of the men I already mentioned, or Henry "Indiana" Jones, Jr or Harry Callahan, Paul Kersey or Rocky Balboa, James Braddock or whomever. Whether that is the natural order of things or just how we insist on writing about reality, inventing it by labeling it, then echoing it again and again. The way that we do.

Especially with film. We project onto the big screen idols and ideals and then we emulate them, and the next time around--if not the time before--we can say the movie is copying real life. Or we can fantasize as we definitely did when Reagan was president (and as we definitely do today under Trump) about heroic men saving lives, taking out bad guys. That whole "good guy with a gun" fantasy that Republicans like to throw around when their second amendment feels threatened--that is the same fantasy that is embedded in so many of these action movies. That the same idea came packaged in this film out of Australia is not shocking of course, because one of the clear versions of history we see around the world is the Great Man version of everything, that powerful men shape the world and others follow. The Lord Humungus is one of these Great Men. So is Max. So might be Wez if he were not so impulsive. 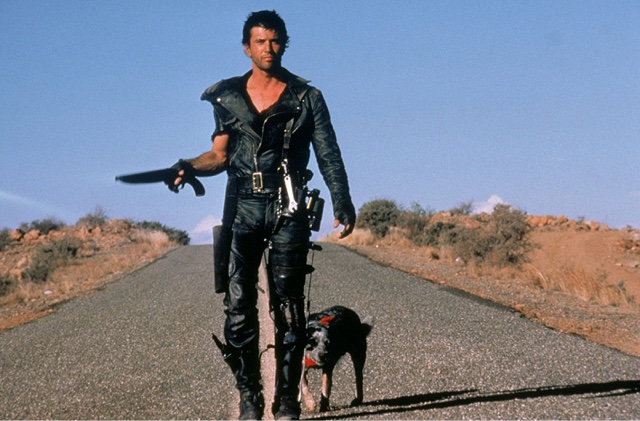 As a kid, I bought into Great Men. I had Bible class in school five days a week, went to church every Saturday. I saw all the big action movies of the 80s. American or not. If a movie like The Road Warrior taught me anything when I was young, it was to embrace the Great Man theory of the world. The American Dream. Whatever you want to call it. If at first you fail, use more force. Violence wins the day. Men rule the world. And, that's okay. Because cool car chases, crashes, stunts. And, I relished every bit of every one of those movies. I played at being one of those cinematic heroes.

Keep in mind, I also thought the world was coming to an end.

It was not a good mix.

But, as long as the film was running, the fantasy was real. In the world's of Dumbledore, "Of course it is happening inside your head, but why on earth should that mean that is is not real?"