if you need any help with the other cheek

My daughter is in the room as I'm watching Groundhog Day--it's the 2nd of the month (and it's also her birthday today). She's reciting lines along with the characters and proclaiming that she hates the movie. Methinks she doth protest too much.

Me--I'm reciting some lines, but I'm not thinking much about anything to write. Hoping for something new... And then I notice a tiny new thing; right before the snow shovel hits Phil when he's in the gas station, it hits the phone on the wall. New, sure. But, not substantial... 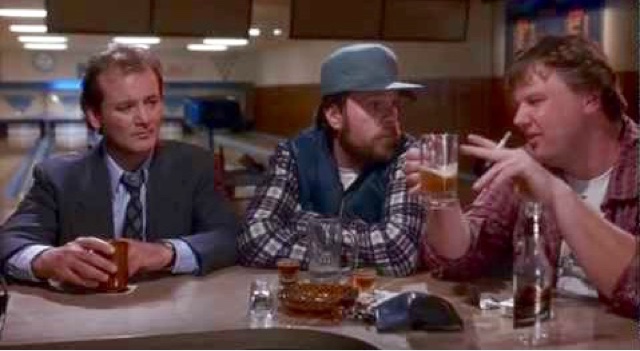 Not in the mood for politics. Didn't see any other movies today.

(I did have a stray observation about The Room, though, as I turned it on while I was writing about The Disaster Artist yesterday. The way The Disaster Artist presents the production, it's entirely inept, like they filmed scenes from only one angle, barely managed multiple takes, and in one instance, they go to shoot in a park in San Francisco and Tommy and Greg get into a fight, while the park scene from The Room means they managed to film in multiple locations in that park that day. And, one particular shot during the Denny and Chris R. Scene stood out. In either film, actually. In The Disaster Artist, they film that scene in the fake alley, in The Room that scene is on the roof. Also, in the scene in The Room, the editing is actually pretty good, especially with a brief shot from inside the enclosed (fake) stairs, ratcheting up the tension that came out of nowhere.)

[Edit much later to point out that the alley filming is accurate. Having since read the book The Disaster Artist, I learned that they refilmed that scene, at much expense, on the fake rooftop later.]

I happened upon a guy's review of a 24-hour Groundhog Day marathon at the Gateway Film Center in Columbus, Ohio--apparently, they do it annually. And, it's the obvious stuff; by the second screening, he's annoyed by Rita; he starts to notice background details like Zaccheus with his leg in a cast at the hospital after a few screenings; he wonders about the Clint Eastwood scene outside the movie theater... And I tune out a little. His earlier suggestion that Phil's piano lessons were "not something he did in earnest" made me shake my head and/or roll my eyes--I wasn't looking at me, so I'm not sure if I just did one, the other, or both. His suggestion that there was no epiphany from O'Reilly's death made me wince. But, the inability to even try to invent a reason for the Clint Eastwood bit really bugs me. I mean, Phil steals a whole lot of money; what is he going to do with it? Nevermind my own reasoning about what the scene means, you gotta at least see that this is just a singular example of the bullshit antics Phil Connors gets up to when he has a bag full of money and absolutely nowhere to go. It's not complicated... Or, at least, it doesn't have to be complicated.

Still, I read about this 24-hour marathon and I wonder if I could arrange something like this, host something like this. I know my daughter says she hates this movie (and I don't quite believe her), but I miss it sometimes. I mean, when I'm ranting about whatever other movie that I'm just going to spend a day or two or three watching and there's so much more that can be said, and I think back on phase one of this blog, when it was Groundhog Day every day, and if there were other things to watch--like time loop episodes of tv shows, or every episode of Tru Calling and Day Break, time loop movies

--I had to fit those in with a viewing of Groundhog Day. I fit a lot of other movies into my schedule of late in addition to the movies I write about for this blog, but it's different; like yesterday, for example. Or Wednesday. I could have watched Popeye the (apparently) usual three times for this current deconstruction/reconstruction of my childhood experience with film, but instead, I wrote (not as much as I intended to, or with the same tone I thought I might take) about Call Me By Your Name, and I wrote about The Disaster Artist (and my Amazon Prime rental of Popeye meant I had no more time to watch it again without paying again, and I knew that today I would be writing about Groundhog Day and then it would make more sense to get into the next film on my "movie life" list.

But, that first year? No. If there was something else to fit into the blog structure, it had to fit in with Groundhog Day, had to happen along with a viewing of Groundhog Day, and there was a discipline in that, a discipline that was remarkable, and remarkably insane in retrospect. But, I miss it, however insane it might have been.

And, I still want to do something else regarding film. My personal YouTube channel (which on my account end is linked to my review channel, but that has fewer subscribers, ostensibly because I haven't posted a review in close to a year and a half) has gotten a bunch of new subscribers recently. Seemingly, mostly because of one of the Groundhog Day deleted scenes. When people comment, I often reply, and this gets extra views, and I don't know the algorithms for YouTube but I think this raises the profile of the video for new views and people apparently subscribe without being as discerning as I might be. And, I feel like I should take advantage of this. When I stopped making my reviews last year, I was, at the same time that I was getting annoyed by the slow growth of audience, getting really good at putting the videos together quickly. If I could manage to refrain from using so many clips and trailers in my videos, I might even be able to monetize that sort of thing pretty easily.

Of course, just like writing this blog, my reviews tended to get wordy, and went a little long to get as many viewers as they should have. (Additionally, when I consolidated both of my channels into one account, I chose to remove the original posts of each review to move them to the new subchannel, so the original view counts and any comments are gone. Plus, movie reviews are often limited in timeframe, unless you've got some serious name recognition, and I don't.)

And, Phil's talking to Rita after she's fallen asleep, and it still feels genuine.

Katie's confusion as she leaves the piano teacher's house is great.

Ciao Guy's (I don't think I ever gave that character a name)... Joy? Contentedness? Satisfaction? Whatever the word for that feeling--positivity about the present, some hope for the future, and an overall sense of well-being--is nice.

Phil hugging Ned like that to send him running still feels out of place for Phil to do this late in his resumptions.

And, I wonder if Phil knows that O'Reilly is in the same hospital bed that he (Phil) was before. We did see that scene, so even though Phil was dead, maybe he was there just enough to know, just enough to see an echo of himself in this old man, just enough to realize his connection to every single person in Punxsutawney (or Pittsburgh, or anywhere), and of course he has to try to save O'Reilly, but also he has to realize that Nurse Broadbent is right, "Sometimes people just die." No epiphany? Really? O'Reilly breathes his last breath in that alley and Phil looks up and what's left of the film? Phil does good things for people that he can do, he doesn't go try to save O'Reilly (though, in a deleted scene, we see that he was there when O'Reilly died), he saves Zaccheus, he helps those old ladies, he helps Felix, he helps Debbie and Fred, he saves Buster, he plays piano and entertains the people of Punxsutawney. He's not using the day for himself anymore.

Today's reason to repeat a day forever: to do for others more than I do for myself... and to stop drawing attention to what other people get wrong on the Internet.