the true burden of all masters

Let us just get that out of the way immediately. I do not aim to SPOIL specific elements of the latest Star Wars but, inevitably, a meaningful discussion about The Last Jedi will entail SPOILERS. (Also, I saw the movie last night and again this morning, and by one of the only rules I have for this blog, I must write about the movie today (or never focus on it at all).

(At least until I see it again... Which, given my multi-day thing with The Force Awakens--which you really must read because it was fucking amazing--arguing against claims of all its plot holes

(and you can find those entries here and here, but also and especially here, here, and here)

and the usual practices of nerds on the Internet (which, on a typo, just autocorrected to internment and I almost wanted to leave it because that feels so damn appropriate sometimes) I expect I might be forced into this film again later. But just in case...) 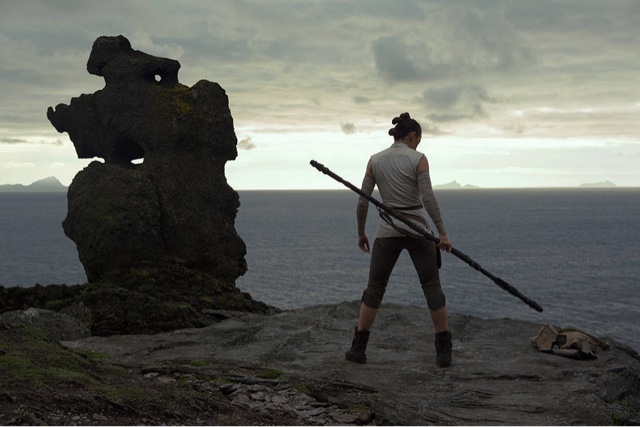 I'm already involved in at least three discussion threads on Facebook and two on Reddit regarding plot details of The Last Jedi. I don't actually want to begin with the details but some larger things.

Structure. Both taking its cue from earlier films, and George Lucas' notion of events rhyming in Star Wars, this film follows on The Force Awakens--a patchwork echo of A New Hope--by taking elements of both The Empire Strikes Back and Return of the Jedi and twisting them around each other, reordering them. So much so, actually that, coupled with the longer runtime, it had me wondering at several points both where does this movie end its story and what is left for the third film in this trilogy? Additionally, as earlier Star Wars films (especially the numbered ones) were built of smaller episodes, setpieces and locations and incidents like an old film serial. Of course, Lucas did that deliberately (and he did the same with the Indiana Jones films) because he was a fan of old serials. Still, it's easier to take the separate parts of, say, A New Hope and map it onto the typical 3-act (or maybe 4-act, but I have yet to really look into that, in more recent Hollywood fare) structure--from the opening assault on the Tantive IV to getting off Tatooine, infiltrating then escaping the Death Star, then the battle of Yavin.

The act structure here in The Last Jedi seems a little more diluted. There's an opening battle and setup for the chase plot to come--and I wish I could have had a timer out in the theater to see how long the various pieces were. Structurally, this is like the Battle of Hoth in The Empire Strikes Back. Then the plots separate as we get caught up with Rey on Ahch-To. This sequence ends up getting cut together with the ongoing chase and potential mutiny on the Raddus (which maps onto the Falcon's trip from Hoth to Bespin) and Finn and Rose going to Canto Bight (which sort of maps onto the first part of the Cloud City arc, but also has echoes of the Pod Race from The Phantom Menace or the Speeder Bike chase from Return of the Jedi. Then, each of these three threads moves into a second segment--the mutiny turns toward potential escape, Finn and Rose infiltrate the Supremacy (Snoke's ship), and Rey boards the Supremacy and goes with Kylo to meet Snoke. These map onto the Battle of Endor, events on the surface of Endor and inside the second Death Star during that battle, respectively. And, the movie could have ended with the conclusion of this battle with only small changes--notably, DJ would have had to not turn on Finn and Rose. But, 1) for the rhymes to keep playing, DJ has to betray them just as Lando betrayed Han and Leia (although DJ doesn't get to come back and save anyone as Lando helped Leia et al get away after Han was handed over to Boba Fett; DJ simply gets away with his reward, setting up something I will get to below), and 2) if Rey had turned Kylo or saved him, as Luke did his father, there would have been almost nowhere for Episode IX to go.

So, then there is the final act on Crait.

(I had deliberately not paid attention to a lot of the new artwork and character and place names for this Star Wars coming out over the course of the past year, so I didn't know the name of this planet until a character said it, and being a far more in touch Star Wars nerd years ago, I thought it was Krayt, and hoped the namesake "dragons" on Tatooine actually came from this planet and we would get some awesome dragon battle... Even though I had seen the Last Jedi trailers and knew we would be getting the skimmer battle with all that red dust coming up from the salt flat.)

Another echo of the Battle of Hoth, or so it seems until 3 things happen: 1) the small Resistance remnant inside the old rebel base realize they have no way to escape, 2) their one attempt at fighting back fails miserably, and 3) Luke arrives. At this point, there is no clear rhyme of an earlier film. Mostly because Luke does something we have never seen a Jedi do before. I will not spoil it but what might be the usual final battle between Jedi and (Sith) turns out to be something else.

Now, this structure made the first viewing (last night) feel more its length--two and a half hours--but knowing what was coming and how it would fit together made the second viewing (this morning) flow a lot faster and more smoothly. My own impulse toward the rhyming structure and my expectations for where this trilogy would be going affected my experience of its passage.

Lore. And, this one might be short. I've already said on Facebook today how much I don't care that Snoke is not explained. His actions outweigh his intentions is basically how I put it there. In the filmic structure but also in the story structure, Star Wars--in the films, but also in the larger (mostly abandoned) canon of novels and comics and cartoons--is about the cyclical battle between good and evil, between those who use power to subjugate and those who work to stop them. The prequels altered this battle a little but only to quite deliberately upend the cycle by revealing that the war was not what it seemed to be. DJ has a line in The Last Jedi about how the First Order will kill the Resistance today, and the Reistance will kill the First Order tomorrow. He uses pronouns to universalize it, but the point is simple: if the division must be a division between "good" and "evil", between us and them, then yes, the cycle will repeat and repeat. We can see this same thing in modern politics; in the US we have a two-party system and so we swing back and forth between them, and whether or not that swing has gotten wilder or the 24-hour news cycle and ubiquitous internet discourse (if you can call it that) has simply exacerbated what already was, DJ's take is apt; one side destroys the other, and then they switch, and then they switch, and then they switch... Which will lead into the third thing below.

For now, though, let us backtrack. The Jedi do not exist. The Sith do not exist. But there are still people capable of accessing and manipulating the force. While Luke failed to train new Jedi, Rey has the resources in the old Jedi books she snagged from Ahch-To to rebuild. And, the final scene with the little boy in Canto Bight (which plays like a post credits scene, moving the film's internal structure farther away from the usual Star Wars structure) suggests a new direction for the series focused on a younger generation. (It also reminded me a bit of the series finale of Buffy the Vampire Slayer when they activated all of the potential slayers at once and we get clips of young girls standing up for themselves, one fighting off abuse, one choking up on a baseball bat to hit big. The kid in Canto Bight previously tried to defend a fathier from a big guy with a whip, he has helped Finn and Rose escape the local authorities, and his friend tells tale of Luke Skywalker, and then this kid grabs a broom using the force, and it's a sign the new, new hope might be all over the place. Not just one chosen one. The Skywalker saga is coming to an end. But, just as Luke tells Rey that the force does not belong to the Jedi, and to think that it's light will go out if the Jedi ceases is vanity, so too does it not belong to the Skywalkers. The lore is moving past Jedi and Sith, past Skywalkers and Solos. Rey's parents turn out to be nobody of import, and that is important.

Shades of Grey. Not just in the new take on force users--and the brief team-up of Rey and Kylo that gives us a surprising and unique death and a wonderfully choreographed fight sequence--but also in the politics, the point of The Last Jedi seems to be that we need to get past the us and them mentality. DJ does not betray Finn and Rose only to turn back and save them after having mixed feelings. He betrays them, takes his payment, and leaves. This is important. The ship DJ stole to escape Canto Bight belonged to an arms dealer who sold arms to both the First Order and the Reistance. This is important. Luke, it turns out, nearly murdered Kylo in his sleep because Kylo's power frightened him. This is important. As long as the First Order exists, the Resistance will exist. And vice versa. This is also important, because the film is telling us quite explicitly that the fight will continue as long as there are two sides. In The Force Awakens Max Kanata also said as much.

The chase structure central to the film (and reminiscent of the Battlestar Galactica episode "33") is both an echo of the Millennium Falcon's trip from Hoth to Bespin and, in extending through more screen time, something new. It is the theme writ large. One side will pursue the other doggedly until it is destroyed as long as one side insists on subjugating the other. The film doesn't offer a solution to this, exactly, though the brief suggestion that Rey and Kylo might join forces beyond that fight in Snoke's throne room, offers something; Rey is not a Jedi, she is drawn toward darkness, while Kylo is not a Sith, and he is conflicted over turning fully from the light. It might almost have been better if Rey had not stolen those Jedi tomes because then there could be nothing but a fresh start without old doctrines. And even bigger theme is that sometimes you must let the past die and move on. Rey and Kylo are doing this. He has issues committing to it, but he tries. Which brings me to...

The Future. Yoda tells Luke, "We are what they grow beyond. It is the true burden of all masters." Within the film, he is talking about Kylo and Rey moving past old teachings, finding something new. But, in terms of the films, this is also what The Last Jedi manages to do. It lets the past die, rhyming with them in its way but also moving beyond those rhymes. The series is no longer beholden to the earlier films as it has been. And, it is able to maybe try a little free verse.