i forgot to take the legs

It comes down to this: is it funny that Phyllis' little monologue about her see-through nightgown disarms Winship and Tart? Yes. In fact, as Tim Conway points out in the commentary track (which I listened to yesterday), if you watch Don Knotts' face through that scene, his reaction is so hilariously nuanced and complex, while Conway's is simple shock. These two detectives, already proven to be inept in just a handful of scenes, are taken aback, frozen, and that moment is emblematic of so much more. 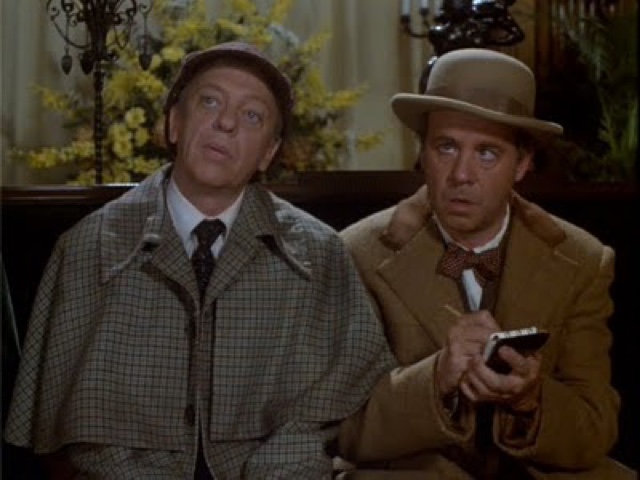 The film begins with a sexist trope in Lady Morley, the cold, demanding wife. (Imagine the film if it was Lady Morley who survived and not Lord Morley; she probably would have just returned to the house and either killed Phyllis right away or thrown her out on the streets to fend for herself without any of the Morley money. It would have been cruel, it would have been swift, and there would have been no detectives from Scotland Yard come to solve anything.) The rich bitch wife is an old trope, a tired one. But, Lady Morley is there for just the one scene, so her characterization just wouldn't be likely to have much depth.

Then, we've got Nanny. Effectively a nazi stereotype, even colder than Lady Morley. She doesn't hesitate to use violence to end Justin's... episodes.

Later we will meet Hilda, the upstairs maid, in stereotypical oversexualized maid uniform, showing off ample cleavage and a lot of leg. The best descriptor she's got for herself is that Lord Morley said she was "full of bounce." Tart gives her his card and she puts it between her breasts. (As I discovered just last night, after so many years and so many viewings, he gives her another card at the end of the movie as well, putting it between her breasts himself.) When Winship falls into the elevator and her corpse lands on him, Tart's impulse—because, it's funny, duh—is to say, "she really goes for you." This is all she does. (They don't even get to interview her outside the initial meeting.)

But, back to Phyllis.

She is the femme fatale here, except this is a mix of comedy and horror with a splash of detective, and not film noir. Her inherent seductiveness—keep in mind, that while walking through the secret passageways of the house later, Winship and Tart will spy on Phyllis undressing. The spying thing almost seems like an early example of something common to 80s comedies, where spying on a woman in a state of undress is basically a victimless crime. See, for example, Police Academy or Porky's. Men are perverts and women are sex objects. Here in this family-friendly comedy, we've got a sort of crossroads between 70s sex dramas and 80s sex comedies... Or something like that. What we've really got is American cinema being perfectly alright with sexualizing women (but without endorsing too much sex). I wrote about Porky's as being a sort of innocent sex romp, because somehow American cinema can do that. We fear sex in film (but love violence) but are okay with a bit of nudity, as long as it involves women. Because we enjoy a nice patriarchal double standard. Men (for the most part) drive the central plot and women are there to serve their needs—hence the absolute ridiculousness and necessity of a measure like the Bechdel Test—just how we like it in the real world. Because, you know, tradition. Or because men are jealous beasts who don't like to give up any kind of power without good reason. And the list of good reasons is pretty fucking short.

So, enter Phyllis, femme fatale in a film that doesn't really need one, sexualized in a film that is made for families, and her audience is two inept fools who really should not be detectives at all. But, they are men, and she is a woman, so whether she's trying to deliberately disarm them, or if it is simply her impulse to present herself as something sexual, she describes trying on the new nightgown from Talbots the night Lord and Lady Morley were killed, and she talks about how low cut it was, how it had lace straps, and when she tells them how the sides were slit up to her thigh, she lifts the side of her dress to show them how high, and there are no notes from that interview afterward because Tart is too taken with Phyllis and her monologue. Because, men staring at women is funny. Because men being powerless before women is funny. Except it's only funny because, like any punchline, it's the unexpected; men are not supposed to be powerless. This sort of joke relies on the idea that men are in charge, men are powerful, and women are weak. The only way she can have any sway is to present herself sexually, but that really just gives them the power. If Winship or Tart were less inept, the film would probably involve a love story with this femme fatale like any film noir. But, they cannot even effectively male.

In film study terms, this makes them effeminate males, inherently ineffectual. This fits their role throughout the film. They solve nothing of the mystery. They serve only as Cassandra-style doomsayers speaking to co-conspirators who will pretend they are raving about nothing, and the killer waiting to be revealed. But, in this they are being driven by Lord Morley.

(We will see a couple more male protagonists who don't really do that much in their own stories in the coming weeks... Perhaps a subconscious response to the loss of American hegemony in our loss in Vietnam—the very thing that 80s action films responded to.

So, does the Private Eyes rely on sexist tropes? Certainly. But, our society is inherently sexist. And, in 1980, more overtly so than it pretends to be now. So, do we forgive the film for being sexist? Do we ignore its sexism because at the time it was acceptable, and it is still funny?

We are sexist. Maybe our films should be as well. Or maybe film is one of those places where we can deliberately try to step past the bounds of our everyday interactions and create something better. Move us past sexist bullshit by modeling a world without.

Instead, it's embedded in little moments like this that kids like me are watching and we laugh, so we don't notice just yet anything wrong. We just roll with it. When they watch Phyllis undress and get excited at her taking off her stockings, it is both openly sexist and amusingly old-fashioned, so we laugh. We roll with it. And, it is just another piece of the whole. And, if we enjoy the whole, we accept the parts.

And, don't get me started on the "Yokohama yo-yo" line.