it’s a little on the nose

Being the Groundhog Day enthusiast/obsessive/blogger that I am, it is interesting to me that out of all the characters in Dave Made a Maze, the one who never actually enters the maze is the hobo played by Rick Overton, aka Ralph from Groundhog Day. The one guy--who just might be Ralph all these years later--who has been around this kind of relentless, repetitive, lesson-making fantastical venture before, is the one who never participates now. (Not that he, you know, ever really necessarily knew what Phil was going through in that time loop. The closest he might have come to understanding it may only have been on that night that he and Gus were quite drunk. And, of course, they would not remember it the next day, anyway.)

Also, in the opening credits, he gets a "with".

The hobo is, of course, the person that, by choice or circumstance, exists outside the normal channels of everyday life.

Dave's malaise, Dave's aimlessness, Dave's need to do something that gets noticed. This is the trap that everyone gets caught in. We see Dave animated under the opening credits, making origami birds, painting, playing and then giving up on his keyboard, trying his hand at woodworking, panicking at a call from Annie. This is Dave's life, and this is all of our lives. The whole premise is simple--the simple that can be taken as profound if you 1) focus and obsess, or 2) are just in that right mindset. The film is ridiculous and silly. It has dialogue that barley tries to raise the material above the obvious. But, it is also honest. Like Groundhog Day, really, but without the strong central performance. Without some of the cleverness. And, with a whole lot more absurd. The film is either absurd or brilliant, or a little bit of both. But, it makes its point. Life, when you feel powerless to control it, might as well be an oversized cardboard labyrinth full of fatal traps and a murderous minotaur. Whatever you do, whether you wander around by yourself (Leonard), play around with your romantic partner (Greg and Brynn), picnic (the Flemish tourists) or try to record everything for posterity (the documentary crew), you will end up dead at some point, even if it ends up being outside the maze.

The forced perspective scene is interesting because the people on screen, inside the maze, cannot see the forced perspective, the "normal" room with table and chair, painting on wall, cups on the table. Only we can see it properly. The movie is interacting with us, but also, so is Dave's maze. And, it is immediately after this that they dive into a box on a different table, that puts them into cardboard pipes, and turns them briefly into cardboard puppets (with a great moment in which the puppet Minotaur, not being so frightening, is immediately replaced with his full-size version, towering over the other puppets. The movie is playing with its own visuals, after interacting with the audience. Effectively, we are inside the maze, too.

Which is the kind of line, writing about the movie, that is absolutely dumb and slightly brilliant. 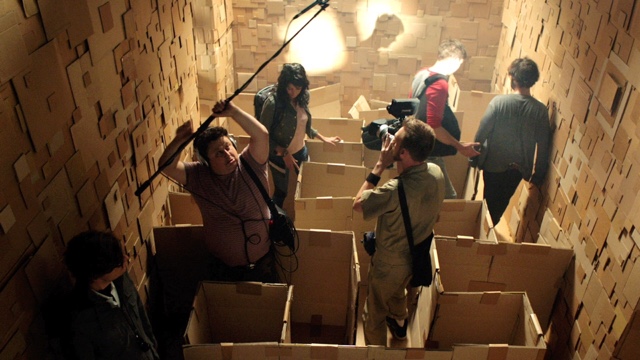 Dave started building his maze from the middle, "like a seashell". It expands and expands, even eventually exiting itself to encompass the apartment. But, to escape, Dave has to both have help from his friends and, with his girlfriend, invent and then destroy a heart for the maze. He has to define in explicit, if not entirely understandable, terms what fuels the maze his life has become, and then break it down, and tear down the maze itself, so that life can continue with maybe some semblance of normalcy.

And, the whole thing was of course, prompted by a job interview. We don't hear how that interview went, but the implication is of course, that Dave is lost because he can't get a job. His line about how being "broke" means that you are "broken" and "you don't work". The literal meaning is obvious. The metaphor should be obvious too. That doesn't make it wrong.

Dave explains at one point, "This isn't exactly the maze I built; some things are just there."

The ultimate point, of course, is that it doesn't matter. Whether he built it, whether it built itself, whether other people built it--by chance or by circumstance, by choice or not--the end is still the same. Life ends in death. The labyrinth is still a lonely place without friends. It's simple. It's profound. It's absurd. It's stupid.

And, it's all of those things because so many people don't get it, or fail to try, or don't realize that other people need them in their mazes.