...newly elected Mayor Mary Sue Beal announced that she was changing the hiring practices of this city's police force.

No longer would height, weight, sex, education, or physically strength be used to keep new recruits out of the Metropolitan Police Academy.

Hundreds of people who never dreams of becoming police officers signed up immediately.

* it doesn't really crawl but that's the whole reading bit to open the movie and set up information (and, in this case, a nice punchline) we will learn later anyway. Plus, here, this text appears over a background of the cityscape, drenched in pouring rain. I also think naming the mayor Mary Sue is deliberate--and only just learned that the use of Mary Sue to suggest a wish fulfillment character in fan fiction dated back to 1973. I thought it was more recent. In this case, though, the Mary Sue is ironic. Like, the liberals want everyone to get in, so they elect Mary Sue and she gives them everything they could ever dream of. And it goes horribly... Until it goes wonderfully. Satire at its best, offering up mixed messages.

The film, of course, is Police Academy.

We meet Tackleberry (David Graf) first--a security guard in need of a serious heist, instead met by an old white guy in a suit, with a brief case. Still, he sees shadows under a door after this and pulls his gun, and opens fire before turning on the lights. He is, by definition, too much.

Barbara (Donovan Scott) gets stolen along with the photo booth he works in, and gets dumped into a river.

Captain Reed (Ted Ross) has a serious mustache, vest, watch chain combo going on like he's in some old west town instead of a modern police station.

The rest of our primary cast are introduced quickly--the put upon husband Fackler (Bruce Mahler); the rich girl slumming it, Thompson (Kim Cattrall); the guy who pulls up in a convertible full of women, George (Andrew Rubin), Commandant Lassard (George Gaynes), Lieutenant Harris (G W Bailey), and Chief Hurst (George Robertson), who is introduced looking over the new recruits arriving in disgust then calling one of them an asshole for talking to him. A moment later, he's in Lassard's office and he offers up this lovely line:

Make Police Academy Great Again, I suppose, would be Hurst's slogan. Chief Hurst thinks "our new lady mayor" is "attempting to dismantle one of this country's great institutions of law and order". He wants a police force of white cis males, and nothing but. He assigns Harris to weed the undesirables out, forcing them to quit.

And, we haven't even met two of our main characters yet, and this bugs me. There are a lot of black extras in the recruit lines, but it is not until Copeland (Scott Thomson) says "There sure are a lot of spades around here" that we meet Hightower (Bubba Smith), and Copeland adds, "which I think is good, very good for the academy." Then, we meet Hooks (Marion Ramsey), who speaks quietly until it really matters and while she's one of the more memorable characters in this entire franchise, we've gone 15 minutes before she shows up. (And, Hightower still hasn't spoken. It's 45 minutes in that he gets to say more than one word.) (We also haven't met Callahan (Leslie Easterbrook) yet.)

Day one, Mahoney has already tricked Thompson into giving him her phone number and almost tricked her into showing him her thighs (she later describes them to him) and tricked Barbara into entering the Commandant's house uninvited, where he meets the Commandant's wife just out of the shower.

Damn if Harris' opening to his first class didn't make me laugh out loud. He's writing on the board and it starts out fine, he's writing every word. POLICE WORK IS WHAT... Then it starts getting out of hand. U R HERE 4! ARREST PRO-- but he only says "cedures"--TRF (for "traffic" V and some that looks like a smiley face for "violations". And, for "high speed driving", somehow, his writing has amounted to h:$RM.PG. Then, it almost gets normal again, S.D. for "self defense" but he says they "will have many examinations" and there's a C in a little house, EXAM (but in cursive). 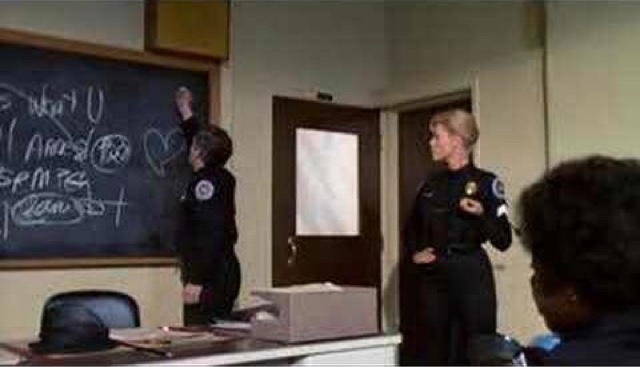 And, the obvious thing that has occurred to me with many of these movies from the early 80s that were in heavy rotation around my house is how little they seem to match up to the religious, conservative world my parents were going for. I mean, this movie alone has a gay bar, nudity, insolence and rebellion against authority, blow jobs, and irreverence of all kinds.

Also, I imagine that Martin sneaking into the women's barracks dressed like a woman is the fantasy that so many conservatives have now when they express their fear of transgender individuals getting to pick what restroom or locker room they get to use. One guy, in one fictional story, nearly a quarter of a decade ago.

But me, eight years old when I see this movie in the theater (and seeing it time and time again on video over the next decade or so)--I'm finding an urge to be sarcastic and irreverent, finding Mahoney to be the character worth being. 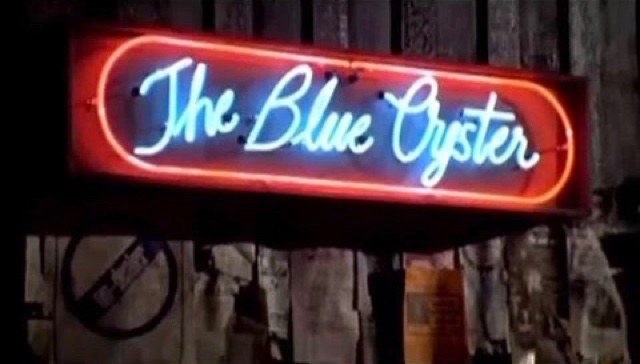 Martin is confronted by Callahan, who finally gets to do something and it is basically stripping him and tackling him into bed--CUT TO dawn, a rooster crows, she kept him all night. Because semi-consensual sex with a superior is all good in 1984 as long as that superior is a female. (And, as long as Martin's entire character boils down to sex. And, the next time we see him he tells Mahoney that he's in love.)

Copeland and Blankes (Brant Von Hoffman) bring in a prostitute to get Barbara in trouble, he gets Mahoney's help, Mahoney stashes her inside a podium, Lassard arrives, and eight-year-old me learns what a blow job is. And, it's 1984 so I laugh when Lassard thinks Mahoney was the one who did it.

Hightower's rage at Copeland using a racial slur is both justified and over-the-top in a racist fashion. And, not long after, Fackler tosses an apple that happens to hit a black man, that black man assaults another one, and a riot ensues. With looting (which Fackler joins in) and cries of "Free TVs!" Roger Ebert complains about there not being a clear film type that this film is satirizing, but other than a few moments like this, the film doesn't seem to be aiming for satire. And, even here, it might just be an offensive stereotype rather than a satirical joke about that stereotype. It is the 80s. Comedy leans hard into offensive punchlines quite often, and mostly just for a cheap laugh rather than some thoughtful satire.

But then, the climax of the film involves Hightower, having been kicked out, telling the Main Bad Guy (Doug Lennox) "I want to watch you off these pigs" before turning around and punching the guy; playing the stereotype within the text of the film in addition the context.