somebody to tell you that life ain’t passin you by

I wrote about Footloose--my first film for 1984 in this childhood deconstruction--once before in this blog. I used it to begin my Six Degrees of Kevin Bacon-inspired month back in February 2016. And, speaking of tying things together--the title of that entry, taking its title from a line from the film, was "all of our lives are ties up with each other"--the film begins with random pairs of feet dancing to the titular Kenny Loggins tune. No characters, no faces. It's deliberately universalizing in its fun. Those feet could be anybody, any of us.

And then, there's the preaching, and then high school girls being bad (and doing dangerous things; at least Ariel (Lori Singer) risk serious injury, anyway). I wrote before several attempts to link the characters to The Tempest through the name Ariel. I didn't write much about religion, but religion is all over this film. From Reverend Moore's (John Lithgow) opening sermon to the oppressive atmosphere all over the town of Bomont. It's interesting, though that when the Reverend catches Ariel dancing to her smuggled cassette, he doesn't make a scene out of punishing her. He hands her cash because her mother thought she didn't have any with her and he leaves. There is disappointment, but no overt display of parental oppression. 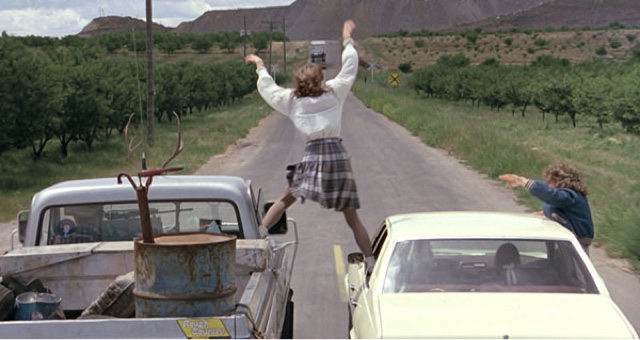 I've written before in this blog--for example, what are you expecting? world war iii?--about growing up in an oppressive religious environment, the Worldwide Church of God. Our church didn't outlaw music, but when I was a kid--when I was 8 and saw Footloose on the big screen, for example--girls weren't supposed to wear makeup, boys weren't supposed to wear their hair long, you didn't celebrate birthdays (though it feels like we found ways around that a lot, a gift if not a party), you weren't supposed to get involved in interracial relationships. And so much more that I didn't know about when I was young. Oh, and the world was about to end so you didn't plan for the future, or at least not a future on Earth. I also attended the private school owned and run by the church, so I didn't have the same experience that Fleur Brown describes over at Medium. She also had to make an effort not to talk about our church with her peers, with her friends outside the church. "Our church masters cautioned us against sharing church secrets with school friends, neighbours, or other outsiders," Brown explains, "they were privileged truths to be revealed when they decided someone had been properly 'converted.'" Brown doesn't shy away from calling the church a cult. I usually just describe it as cult-like. But, remember, I was watching all these movies about rebels and underdogs, outsiders fighting against authority. The pirate Blackbeard, Theodore Ogilvie and Amos Tucker, Luke Skywalker and Leia Organa and Han Solo, Tripper Harrison, Cactus Jack Slade, Flash Gordon, John Reid, Snake Plissken, Boots McGaffey and Alvie Gibbs, Jack Butler, and how many others in films I wasn't watching so often? So many heroes outside the power structure. Some of them tragic, some of them comic, all of them heroic. All I had to do is get past notions of the world blowing up and maybe I had a shot of being rebellious myself.

While I was still going to the private school, still attending a weekly church service, my rebellion didn't amount to too much. I snuck off school grounds, usually only after school, when I was supposed to be waiting in around for my mother to get off work. I might climb into some of the roof's around the school campus with a friend or two, and we might jump off one of them into some weird dirt mount that was always behind the building that would house all the high school classrooms when I was in high school but was workshops when I was in elementary. Friends of mine smoked when we were in high school, but I never cared for it. People drank. Occasionally. But, I wasn't into much of that, mostly because a childhood built on fear left me lonely and isolated even when I was around other people. And, I was always around other people. I had six older sisters. Some of them married, had kids. I had friends from school and church--but no local friends in my neighborhood after... I don't actually remember when my few neighbor friends moved away. I was young. It sucked.

Movies lifted me up and away from it all. They offered conflicts small- and large-scale. They offered heroes and heroines fighting against systems of oppression, against terrorists, against criminals. I wrote in that world war iii entry three years ago about embracing "stories with good guys beating bad guys" but running through all these movies I watched and rewatched as a kid these last several months, I think it matters much more that not only were all these movies about good guys versus bad guys but that the bad guys were often bastions of civilization--bankers, businessmen, politicians... the occasional gangster but that was just another versions of the previous. Emperors. Lords. Sheriffs. Reverends.