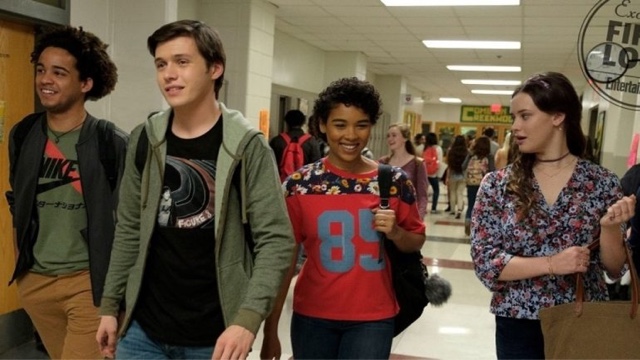 [W]hen you consider that Love, Simon is a major studio release--a teen romance, no less--explicitly about a gay protagonist who's grappling with the best way to come out to his family and friends, the very fact that it's so blandly competent seems all the more remarkable. We're living in a time when gay kids can have their own sweetly mediocre studio movies with all the best intentions. Isn't that something?

Watching queer go mainstream in the 21st century entails weighing and reweighing how it feels when the rest of the world keeps reminding you that it's still playing catch-up--in slow motion, no less. Meanwhile, you're out and about living your life, or trying to, while having to make the best of that fact. That's the bargain. Every day I get to wake up and ask myself, Shall I be a bitch about representation today? I typically choose not to be, but it's never an easy choice. I happen to have no problem with LGBT romance in contemporary movies, or in any other aspect of our lives, and I'd like to think that's not only because I happen to be gay, but also because I'm not a dumbass. For me, it's as simple as that, and I see no reason to mince words. But go ahead, America. Take your time.

Someday, Love, Simon might be seen as quaint or corny. When films about and marketed toward every portion of the LGBT rainbow have moved past novelty and into the realm of standard trope for comedies, dramas, and romances, it's quite possible that this good-hearted teen movie might be seen as old-fashioned.

In cinematic terms, is Love, Simon groundbreaking? No, but it isn't trying to be. It's in the universe outside the screen that Love, Simon could be groundbreaking. For example, in response to Shawhan's piece, kr_biffles0987 writes:

Love, Simon is challenging the norms of movies in today's society. Usually, the gay kid is just the token character. Now, he is the lead and it is very exciting... It is presenting Simon's situation as normal, because it is, and that is something people are not used to.

Contrary to the Gill Scott Heron/Vince Staples track scorching the Black Panther trailer, this movie's revolution will be televised. It will be broadcast in movie theaters, on TV screens, and in the hearts and minds of audiences around the world who flocked to theaters to watch Hollywood's first black superhero in action...

Black Panther's massive success did not arrive in a vacuum. It is the product of decades of the film industry hindering visibility and representation of minority actors and characters. Audiences who craved to see themselves on-screen--who perhaps didn't even know that was possible--grew slowly stronger and louder, until a deafening declaration (as loud as $218 million) showed we want and deserve more.

Wonder Woman made over $400 million at the box office last year, Call Me By Your Name this year and Moonlight last year may not have made much money but they got critical recognition and award nominations. White cis males just might be being pushed, at least a little bit, to the side. And, that bothers so many of us that it's quite amusing to some of the rest of us. My thing... My thought after leaving the theater today after seeing Love, Simon, is this: I dont' care for your average romantic comedies most of the time because they're cheap, their romance is cheap, their depiction of male/female relationships assume too much and let attractive stars meeting attractive stars be a good enough start to true love. On the other hand, the pained meditation of Moonlight, the poetic beauty of Call Me By Your Name and the everyday normalcy of Love, Simon take a slower, more realized look at something that better approximates what we call love. I was explaining to my students earlier this week my dislike (to put it mildly) of Pretty Woman for, among other things, its sort of fairy tale nonsense. Love, Simon is almost sickly sweet--my daughter Saer just saw the movie with her friends, and I asked her about it, and she replied,

--but it also seems grounded in something real. It gives shortshrift to even some of its major characters (notably, Leah (Katherine Langford)) but they still feel like actual people, just people we don't get to know well enough because, in the case of Leah, Simon (Nick Robinson) knows her so well that he takes her for granted. But, it offers something important, a sense that coming out is something ordinary. It still isn't. But, the film offers hope, I guess. My daughter added, "On a more serious note... it was in a lot of ways, what people my age, especially part of the LGBT+ community need/want."

And, finally, this, also from Saer:

I was a little worried in the beginning that they were going to make it over the top. But, the part where he talks about the real reason why he was scared of coming out is just because it's scary for everyone to show their true selves made it seem very relatable and significant for everyone.

Universalizing the whole coming out experience, if we could get some of the less accepting folks to watch a film like this, could indeed be significant for everyone.